ULM Stays Steady on the River 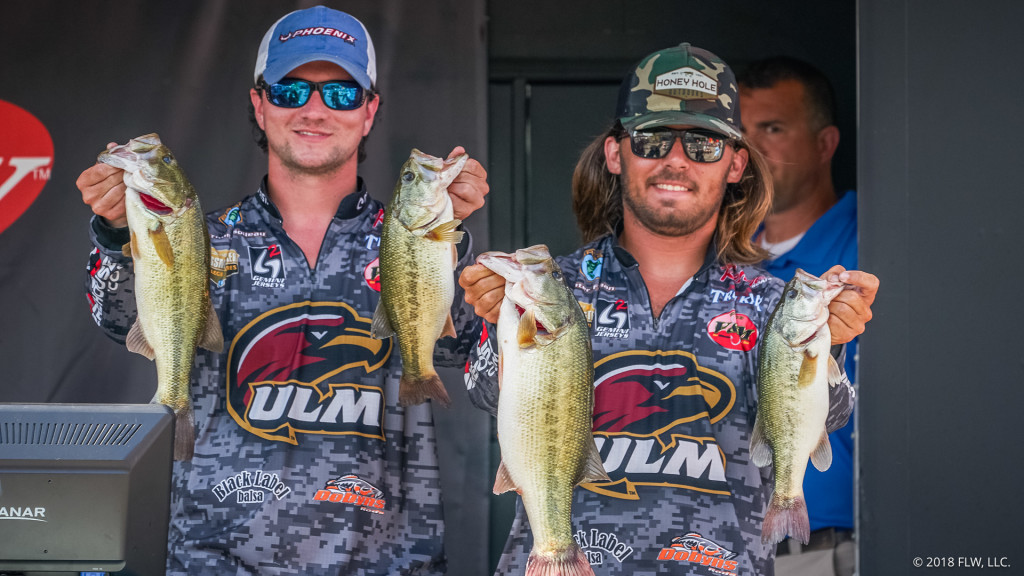 Success was harder fought than on day one, but the University of Louisiana-Monroe’s Thomas Soileau and Hunter Freeman held on to their lead at the YETI FLW College Fishing National Championship presented by Lowrance C-Map Genesis after catching a 12-pound, 4-ounce limit for a two-day total of 26-11.

Returning to the same scenario that produced 14-7 yesterday, the ULM teammates targeted what Freeman described as stump fields with occasional rock piles in a backwater area far off the main river, at the lower end of Pool 4 of the Red River. These structure elements were essential for congregating the shad that played a key role in their day.

“Every time we caught them, when we’d pull up and see big gizzard shad going back and forth,” Freeman says. “Every time we’d see the big gizzards jump, it would happen. At one point, I watched a 3 1/2- or 4-pounder busting one 10 feet from the boat.

Throwing a mix of crankbaits and soft plastics, the ULM anglers found patience and persistence was their best ally.

“You had to hit these spots over and over and over,” Freeman says. “One spot we ran today we hit it like three different times. We hit one spot this morning and I caught our biggest one, but we came back again and blanked on it. There was a spot right down from it and we hit it three different times and blanked on it, then we stopped back by that spot and caught one close to 3 pounds.”

Expounding on that point, Soileau says that finding the right presentation was the key to triggering bites.

“We made the same cast on that spot like three or four times,” he says. “On that fourth cast, we caught that 3-pounder.

“The key was not panicking; staying focused, knowing the fish were there and to keep fishing it.”

Comparing day two, to day one and his team’s practice, Freeman calls this their worst day of the week. He points to meteorological elements as he likely culprit.

“Also, the wind was out of control and it was hard to control your bait,” Soileau says. “We were trying to drag our baits past these spots — when the wind wasn’t taking it away. I was using lighter weights, but when I put on a heavier weight I stopped getting bites.”

The ULM teammates caught six keepers today. They upgraded their smallest fish during their run back to check-in. Stopping on a main river bank with rock and wood, they caught their upgrade on a jig.

Contemplating their day-three game plan, Freeman said he’s not sure if making the long run down to Pool 4 will be necessary and/or prudent. He believes their stump fields are their best bet for big fish, but with the field cut to 10 boats, significantly less fishing pressure might allow them to make better use of their time by fishing closer.