ETBU Wins School of the Year

Texas school improves on their Southern Conference win in 2019 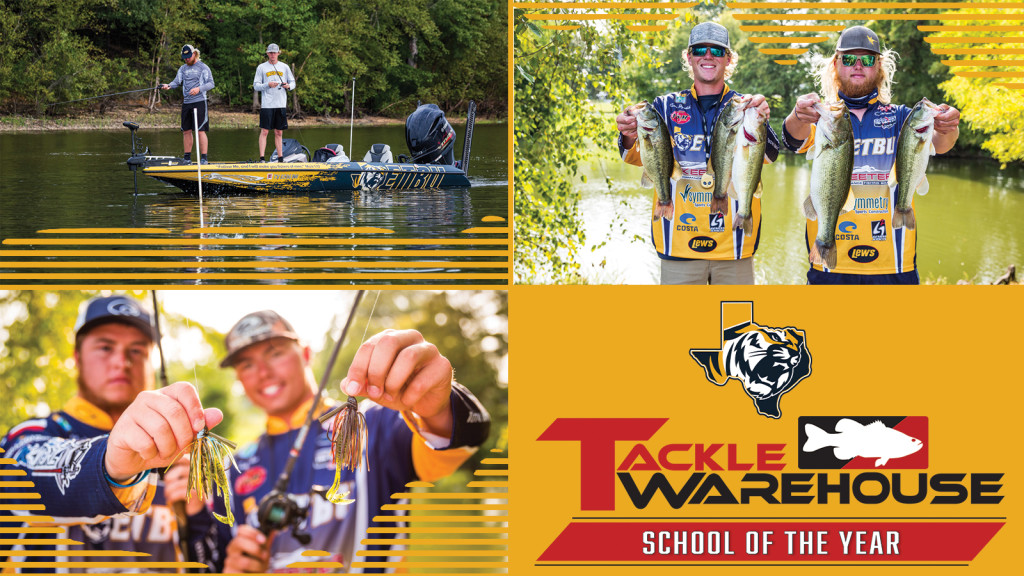 The bass-fishing team at East Texas Baptist University (ETBU) is the best in the country, capping off the 2020 Abu Garcia College Fishing presented by YETI season in first place overall with 2,319 points, and earning the team the title of Tackle Warehouse School of the Year.

The Tackle Warehouse School of the Year title annually goes to the school that has the highest point total at the conclusion of the regular season. Points are awarded to the top two finishing teams from each school that competes in a College Fishing tournament. The ETBU club secured the crown with top finishes in the Southern Conference and a pair of top-10 finishes in the annual Open on Kentucky Lake.

ETBU lost out to Stephen F. Austin State University (SFA) in the Southern Conference School of the Year rankings, but their performance in the Open pushed them into the overall lead.

“I’m gonna be honest with you, I was not expecting Kevin’s call the other day,” says Burger. “One of my guys on the team texted me earlier last week and said ‘Hey, it’s gonna be real close for School of the Year.’ I just assumed we were gonna be up there, but not win it. I got a little downhearted when SFA won the Southern Conference, but to turn around and find out we won Tackle Warehouse School of the Year is great.”

ETBU has a somewhat unique setup, with their bass fishing club being an actual varsity sport. Additionally, ETBU made a lot of efforts to keep operating at least partially in-person throughout the COVID-19 pandemic.

“There have been some challenges in general with travel and our requirements on campus,” says Burger. “East Texas Baptist never shut down entirely, we made it a point to stay open and went through the necessary protocols to make sure we stayed open. That was huge for enrolment for the institution. COVID is the go-to difficulty, but we faced that and were able to overcome it. Our team is always willing to make sacrifices and be flexible, and I feel that’s a big portion of our success. These guys just want to be great, and our goal as a program is a National Championship.”

Though ETBU has fished spectacularly recently, Burger is also proud of his anglers’ academic achievements.

“I don’t say it a lot, but our athletic department and university administration does a phenomenal job of allowing students to come in and be passionate about something and have them excel in that,” says Burger. “I have guys on the team, who, when they first got here, they never expected to be very good in school. They were always borderline in classes, and ETBU does a great job of fostering that relationship between professors and athletes. We try to help these guys and girls out as much as we can and get that mindset of being great and exceling as much as you can.”

As a case in point, Burger called out Jacob Keith, who is working on an MBA.

“Talking specifically about a member of the team, Jacob Keith has been here since the program started,” says Burger. “This spring will be his fifth year, and he’s very hard on himself when he does not do well. I never thought that Jacob would ever get his masters, he never thought he would, but he’s currently enrolled and getting his masters. That’s the kind of mentality I like. He’s trying to be better and do more than is required of him.”

The ETBU fishing team currently has 14 anglers. You can see their complete roster here.

The Tackle Warehouse School of the Year title is determined by the total accumulated points from three regular-season conference events and the annual College Fishing Open tournament. Three hundred points are awarded to the winning team in each tournament, 299 for second, 298 for third, and so on. Each school receives the total points earned by its top two teams in each tournament.

The top 10 schools in the 2020 Tackle Warehouse School of the Year standings:

Here are this year’s winners:

Southeastern Conference School of the Year

Southern Conference School of the Year

Central Conference School of the Year

Western Conference School of the Year

Northern Conference School of the Year