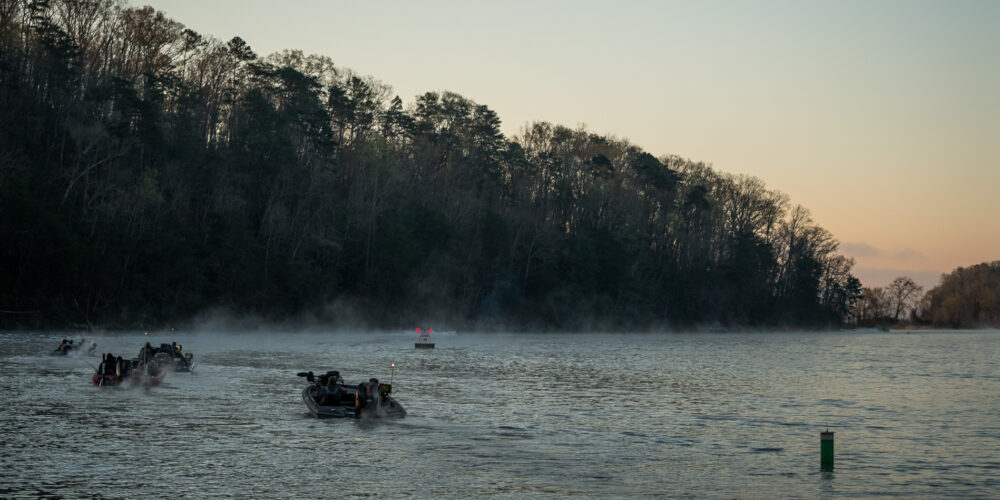 Southeast Tennessee offered up a sun-splashed welcome for the 480 collegiate anglers from across the country eager to tackle Lake Chickamauga. The Abu Garcia College Fishing presented by YETI trailer was center stage at the Dayton Boat Dock under beautiful blue skies on Monday as anglers came off the water from practice to register.

University of North Alabama junior Walker Sahagun fished this lake in May of 2020 with some success. But Sunday and Monday proved to be a different story.

“Yesterday (Sunday) was rough. We were looking forward to today,” says Sahagun. “As the day progressed, it just got slower and the wind picked up and put some chop on the water. It’s been murky out there, so it’s been tough trying to find fish.”

Sahagun and the other 240 boats know what’s at stake. A striking Phoenix 518 Pro bass boat powered by Mercury goes to the winning team. The head fishing coach of the host school, Bryan College, eyed the boat parked in the shade.

“It gets me motivated because we need a spare boat,” says Mike Keen.

The 2021 College Fishing Open also offers a qualifying spot for the top 22 teams in the 2022 College Fishing National Championship. That opportunity grabbed the attention of all participants including Bryan College’s top pair of seniors Cole Sands and Conner DiMauro.

“It would be huge, it would be a big one to win. This would be our last tournament together that we get to fish on this lake in college,” says DiMauro. “So it will be a really big deal for us and then qualify for the national championship.”

Lake Chickamauga is a reservoir along the Tennessee River that stretches 58.9 miles long and touches three counties. It extends from Watts Bar to the Chickamauga Dam in Chattanooga. On Monday at 6:00 pm EST, reservoir elevation stood at 680.32 feet. Full pool is at 683 feet. Though the Tennessee Valley Authority is pulling water at a rate of more than 100,000 CFS, the inflow has the lake slowly rising.

Most of the collegiate anglers welcome rising water levels. The common theme among all those fresh off of their practice sessions was the daily change on the lake.

The field can also lock through to Watts Bar or Lake Nickajack, but Chickamauga is historically so good that other lakes aren’t likely to be a huge factor.

Chocolate milk comes to mind when describing the murkiness on Lake Chickamauga, But that’s not always a negative. Sands is also a local guide and says he had been on the water probably 20 days in March. He knows all about the change.

“I personally don’t mind muddy water as long as it’s not too bad. Right now, it seems like our best stuff is pretty stained. If you can find them in the muddy water, they’re usually real easy to catch, it’s just finding them,” Sands says.

The bass are still in the prespawn stage, but anglers believe they are getting ready to go up and spawn. That condition coupled with a slightly higher lake level could lead to satisfying results.

The ChatterBait seems to be the popular lure of the day.

DiMauro plans to deploy a similar strategy, saying he would “fish shallow, fishing staging fish that are getting ready to go up and spawn.”

So how much will it take to win at Lake Chickamauga? Anglers gave ranges that varied by as much as 20 pounds.

Coach Keen looked at it from two distinct angles.

Bethel’s Steven Mills is taking a deliberate and determined approach.

“I think the key will be staying positive, keeping your head down, not getting turned around and fishing how you know how to fish.”

Bryan College seniors Sands and DiMauro are reaching the end of their collegiate career.  Topping the scales Wednesday with the most weight would stand as perfect timing.

“That would be really big, it would be something to put on the resume,” says DiMauro. “You know we’re both taking the next step, to fish at the next level. It would be a huge kickstart to our careers.”