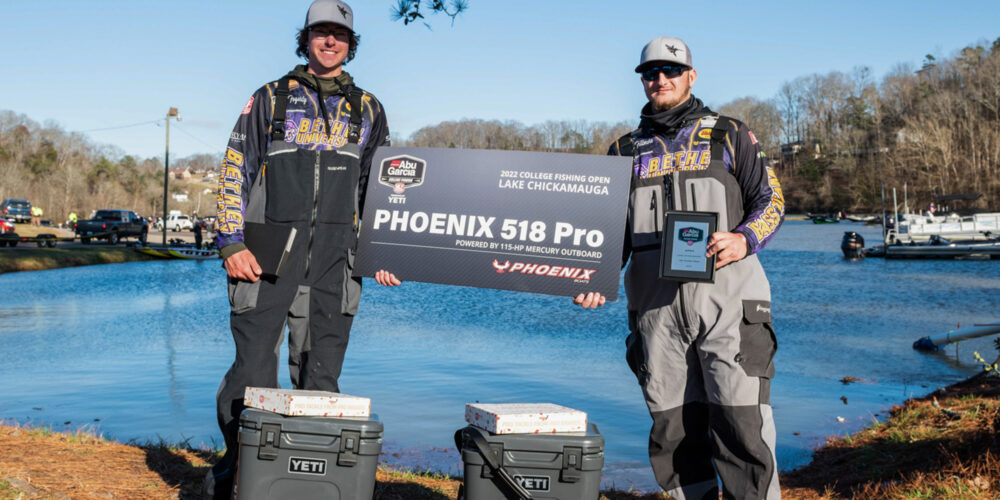 A total of 275 teams competed in the event on Lake Chickamauga, setting the record for the most teams in Major League Fishing history to compete in the College Fishing Open. With the number of teams competing, the Bethel duo said they were surprised to realize they had such a large lead on the final day of the event.

“We honestly just got lucky,” said Fogarty. “We spent a whole day graphing Lake Chickamauga, from the dam all the way up to Sale Creek. This one spot we found is unlike anything we’ve ever seen – just one patch of grass, about the size of a boat – and we managed to pull over 45 pounds out of it.

“After we got a good limit on Day 1, we just stuck around the area to see if we could cull, and kept an eye on the place, but no one else showed up.”

The pair headed back to their lucky spot on Day 2, where they found conditions had changed – the formerly clean water was dirty and the water level had risen, pushing the grass down even deeper.

“The water had come up about a foot and a half or so, pushing the grass down to about 8 feet of water,” said Fillmore. “We had been fishing with a lipless crankbait on the first day, but switched over to vibrating jigs on Day 2, and had our limit by 11:30 a.m.,” said Fillmore.

Their key baits were a Z-Man ChatterBait Jack Hammer and a Queen Tackle Switch Blade Tungsten Bladed Jig in ½-ounce models, with red skirts and a white Yamamoto Zako, which they dyed orange. The pair said once Fogarty reeled in the 9-5, they had a pretty good idea they would be in first place.

“We knew we were sittin’ good but had no idea we had that large of a lead,” said Fillmore. “This is Bethel’s first Open win and it feels great.”

The 27 teams that advanced to the 2023 Abu Garcia College Fishing National Championship were:

The Abu Garcia College Fishing Presented by YETI Open tournament was hosted by Fish Dayton and the Rhea Economic & Tourism Council. The next event for MLF collegiate anglers will be a Southeastern Conference tournament, scheduled for March 4 on Lake Guntersville in Guntersville, Alabama.