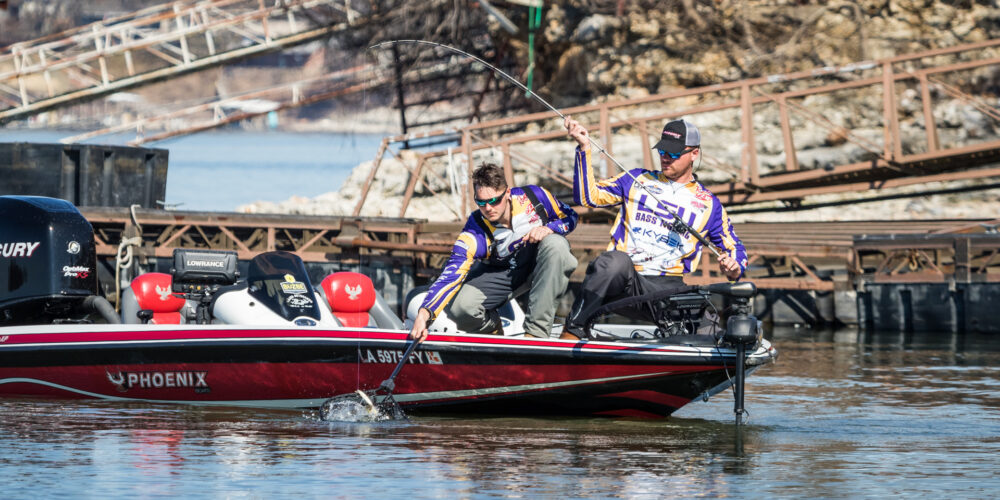 Day 2 of the 2021 Abu Garcia College Fishing presented by YETI National Championship presented by Lowrance on Grand Lake has been about like Day 1 so far. While there are some teams definitely catching bass, a lot of the field is still riding the struggle bus pretty hard.

As far as conditions go, it’s remained sunny and slick since takeoff, with very little wind. Though it was downright cold this morning, the afternoon is going to be truly spectacular and should continue to warm the water. The water certainly could do with some warmth – there was skim ice in places on the lower end of the lake this morning.

As of noon, we managed to catch up with most everyone in the top 10, and all reported a fish or two. Alex Johnson and Zachary Potter are perhaps the most interesting risers – starting in ninth place, they have four fish for about 12 pounds. Otherwise, the top teams seem to be holding serve or are in a position to do so. So, we’ll see exactly how things shake out come weigh-in.

One thing we haven’t found is a team absolutely smashing them. With the weather continuing to warm, there’s a chance someone lands on a true Grand Lake megabag and really shakes things up.

Here’s a rundown of who has fish so far:

Drury University – Cole Breeden and Cameron Smith – four keepers, one is a 3-pounder

The afternoon bite should be the best, and with our crew off the water you’ll have to tune into the live weigh-in starting at 3 p.m. CT to see who’s got ‘em.