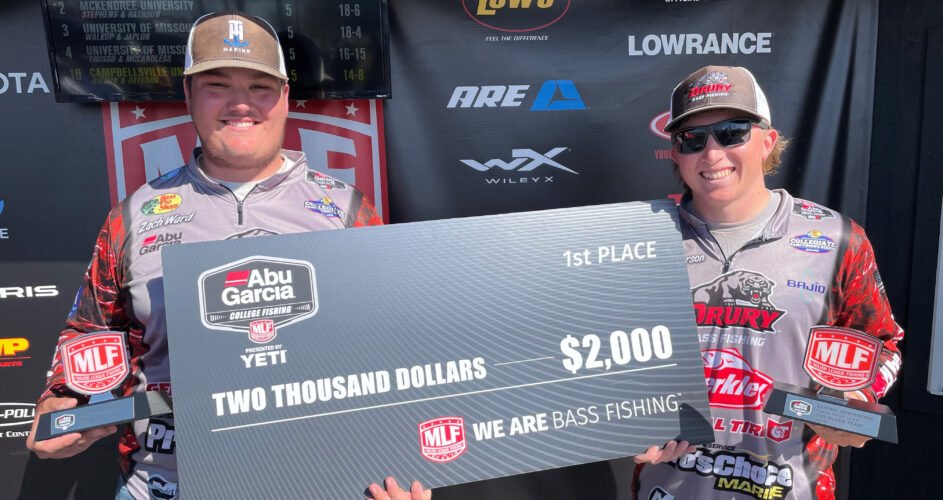 “We made a bit of a long run because I felt the majority of the field was going to fish from the dam to the Kimberling City area,” said Henderson, a Drury freshman. “I grew up on Table Rock, so I ran up past Kimberling City and went to an area I was familiar with.”

Henderson said the morning action was slower than he expected, and the team had only two keepers at 1 p.m., so he changed areas to try to fill their limit. The anglers relocated to a spot Henderson had caught fish on a couple of weeks prior to the tournament. The duo used a Garmin Panoptix LiveScope System to locate a school of fish feeding on shad and filled out their limit in 30 minutes.

Henderson said the morning bite was triggered by a 2.8-inch Keitech Swing Impact FAT Swimbait in Rainbow Shad  and Sexy Shad colors and a 2.8-inch Rainbow Shad-colored Berkley Powerbait Power Swimmer Swimbait. The team’s afternoon baits of choice were a 4-inch Sexy Shad-colored Storm Largo Shad as well as the 2.8-inch Keitech swimbait. Henderson said the team caught 25 short fish and eight keepers during the course of the day.

“If we weren’t looking at the fish on the LiveScope we were targeting pea gravel flats in anywhere from 15 to 20 feet of water,” Henderson said. “We were just scrubbing the bottom. Then when we threw it through schools of fish, it just depended on how deep the bait was; the fish were directly under them. It varied from 5 to 15 feet deep.

“Growing up on Table Rock, I’ve seen how tough that lake can be in post-front conditions,” Henderson said. “To catch 20 pounds on a lake I know and love feels great – especially to do it my freshman year. This feels great.”

MLF College Fishing teams compete in three regular-season tournaments in one of five conferences – Central, Northern, Southern, Southeastern and Western. The Top 10 teams from each division’s three regular-season tournaments and the top 20 teams from the annual Abu Garcia College Fishing Open will advance to the following season’s National Championship. The 2022 MLF Abu Garcia College Fishing Presented by YETI National Championship Presented by Lowrance will be held on Fort Gibson Lake in Wagoner, Oklahoma, March 29-31, and is hosted by the Wagoner Area Chamber of Commerce.