Montevallo Wins School of the Year 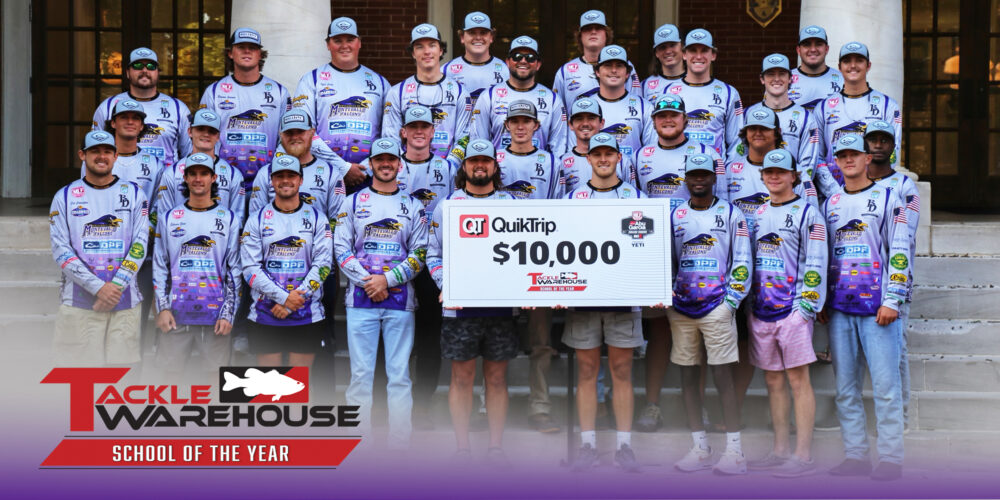 This year the bass fishing team at the University of Montevallo took home the coveted Tackle Warehouse School of the Year Presented by QuikTrip title as the best team in Abu Garcia College Fishing Presented by YETI. With six Top 10 finishes in the Southeastern Conference and the College Open in 2021, the team took the top spot by a solid margin with 2,332 points on the season. For the win, a $10,000 scholarship was awarded to Montevallo from QuikTrip to help offset tuition for the students who contributed to the title. The alma mater of 2018 Forrest Wood Cup champion Clent Davis, Montevallo has been mixing it up in the college ranks for a long time, and with 60 members on the team, they flew high this season.

“We’re proud to be able to have that title,” says William Crawford, the Outdoor Scholars Program Director and Head Fishing Coach at Montevallo. “It was definitely on our to-do list. Every year we set out and have goals for our team to try to accomplish. The School of the Year title was definitely one of those goals we were trying to reach. We’ve got a good group of anglers from across the country, and their knowledge and skillset is unreal. It’s crazy to think how much these guys know and just how good they are out on the water.”

Back in 2015, the President’s Outdoor Scholars program was started at Montevallo to educate students on careers in the outdoor industry. At the time, the bass fishing team was folded into the program, and it seems to have been a success.

“It goes hand in hand with what we do,” says Crawford. “The team here had already been established, and it was a student-run club. In 2015 we made the transition to an actual team where there are scholarships involved in our program, there’s school funding involved in our program. Everything is running and set up just like an athletics team on our campus.”

In 2020, Montevallo was the Southeastern Conference School of the Year and Grayson Morris and Jacob Pfundt won the College Open on Kentucky Lake. Sending 11 or more teams to each regular conference event, Montevallo had numbers on their side all year.

“Montevallo as a team had a really good run, with a lot of strong finishes from everyone on the team,” says Morris, a junior Business Management major. “Everyone contributed to points this year, and in order for School of the Year to be won, it has to be a team effort. Montevallo really focused in on that this year as a whole, our team motto is to make it all about each other, not yourself. Being able to claim that School of the Year title is something that me and the rest of the team will never forget.”

One of the high points that set the team apart in 2021 was their performance in the Open on Chickamauga. There, Aaron Cherry and Chandler Holt finished seventh and Adam Carroll and Trey Dickert knocked out an eighth-place finish. While Dylan Akins and Chase Carey of Emmanuel College finished higher, the next best Emmanuel team finished 32nd, which helped Montevallo get a leg up. Montevallo actually put half their teams in the Top 50 in that event, which is a good testament to their ability to work together.

“One thing our coach really hit on is that sharing information can be shared in multiple ways,” says Morris. “In our team, we don’t focus on specific spots, each angler, each team, works hard to find those spots. Really, we try to break down a lake between the team members at a tournament, and we talk about the patterns at the hotel at night. We always try to stay ahead of the fish and meet them where they’re going. If we figure out a pattern over the whole end of the lake, we can spread out and a lot of teams will have good finishes.”

“We all know that somebody is going to be on ‘em,” says Crawford. “It allows the guys to sit back and relax, there’s not any pressure. If it’s their day it’s their day, and if not, as long as Montevallo is up near the top, that’s what matters.”

The Tackle Warehouse School of the Year Presented by QuikTrip title is determined by the total accumulated points from three regular-season conference events and the annual College Fishing Open tournament. Three hundred points are awarded to the winning team in each tournament, 299 for second, 298 for third, and so on. Each school receives the total points earned by its top two teams in each tournament.

MLF also recognizes the top-performing school in each of the five Abu Garcia College Fishing conferences with the Tackle Warehouse Conference School of the Year award. The point system is structured in a similar way as the overall School of the Year award, but points are only given for the three regular-season events in each respective conference.

Here are this year’s winners:

Southeastern Conference School of the Year

Southern Conference School of the Year

Central Conference School of the Year

Western Conference School of the Year

Northern Conference School of the Year