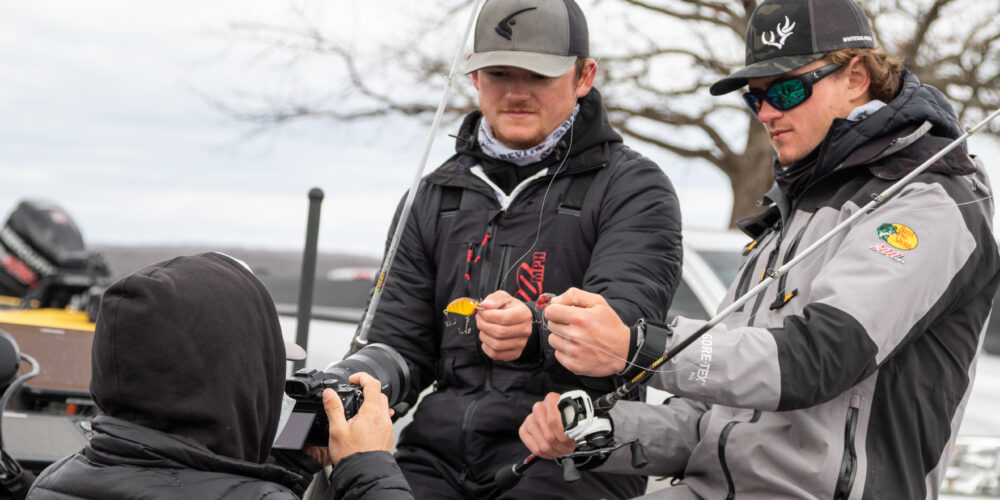 WAGONER, Okla. – The Abu Garcia College Fishing Presented by YETI National Championship on Fort Gibson Lake was a tough tournament for all involved. The weather challenged the anglers, and the bass in Fort Gibson weren’t exactly making things easy either, as no team in the event caught a limit every day they fished. But, sometimes tough events can be revealing, and if you’re looking for an edge in the spring in Oklahoma, some of what the Top 10 did may be of interest.

Here’s what worked best on Fort Gibson this week.

1. Earning the W, Kaden Proffitt and  Cason Ragsdale of East Texas Baptist University caught their fish grinding shallow staging areas and transitions with a 1/4-ounce black and blue jig, a 3/8-ounce Z-Man/Evergreen ChatterBait Jack Hammer in red (and other colors) as well as a handful of crankbaits. For both the vibrating jig and the jig, they used a few trailers including one poured by All-In Custom Baits. On the cranking side, a Storm Arashi Silent Square, a SPRO Little John 50 and a 6th Sense Crush 50X, all in shades of red got it done.

2. Brining the heat from east Tennessee, the King University duo of Donavan Carson and Landon Lawson caught fish off steep banks on lower end of the lake. For a crankbait, they overcame the fishing pressure with a silent Rapala BX Brat. They also used a 6-inch Roboworm Straight Tail Worm (bold bluegill) on a drop-shot and a homemade jig with a NetBait Paca Chunk with the tips dyed orange with Spike-It.

3. Bailey Bleser and Nathan Doty carried the flag for McKendree University with a variety of standard spring baits. Leading the way were a 1/2-ounce War Eagle Spinnerbait with a Zoom Split Tail Trailer and a green pumpkin 3/8-ounce D&L Tackle Advantage Casting Jig with a matching Berkley PowerBait MaxScent Power Chunk. The duo also added a key fish on a Berkley Frittside 5.

4. Fishing shallow wood for most of the week, the Stephen F. Austin squad of Austin Anderson and Cal Cameron had a few baits that got bit. One was a 3/8-ounce Texas rig with a black and blue Zoom Ultra Vibe Speed Craw. Another was a Buckeye G-Man Ballin’ Out Jig with a custom skirt and a Zoom Ultra Vibe Speed Craw trailer. A 1/2-ounce Colorado/willow War Eagle Spinnerbait with a trailer hook completed the arsenal.

5. Lafe Messer and Matt Messer of Kentucky Christian University fished a handful of banks with a SPRO Little John 50 in fire craw and spring craw all week. Rotating the same banks each day, the brothers reeled a little slower than normal, which they think helped the fish to get the baits better.

6. Identical twins, Justin Carr and Austin Carr of Illinois State University used a crankbait and a jig on rock and docks like about everyone else. They started with a Rapala DT 8, but lost them all and went to a Lucky Craft LC 1.5. For the jig, they went with a variety of 1/2-ounce models in black and blue, with matching trailers that included a Strike King Rage Craw and a Strike King Baby Rage Bug.

7. The other ETBU team in the mix, Cannon Bird and Jacob Keith mined a long, narrow creek with inflowing water for their weight. All week, they relied on a few colors of the venerable Z-Man/Evergreen ChatterBait Jack Hammer. For trailers, they stuck with either a Yamamoto Zako or a Strike King Menace Grub.

8. The defending champs from Drury University, Cole Breeden and Cameron Smith executed a gigantic comeback on Day 2, weighing 21 pounds, 9 ounces to rocket up the leaderboard and into contention. Fishing brush with a jerkbait, LiveScope and a jig, their Ozark skills paid off once again in Oklahoma. For jerkbaits, they used a Jackall Squad Minnow 115 in clown and a Megabass Vision 110 in Ito natural. On the jig side of things, basically every bait in the boat got a chance, with the Missile Baits Mini Flip, a Pig Sticker jig and a Jewel J Lock Flip’n Jig all getting play. They also caught a key fish on a drop-shot with a plum-colored Zoom Trick Worm.

9. Dawson Cassidy and Augustus McLarry of Texas A&M – Commerce fished farther up the lake than anyone else, but not really in the most riverine portion. Targeting bluffy banks, points and laydowns, the duo used a 3/8-ounce War Eagle Spinnerbait and a 6th Sense Crush 100X. For rods, they went with a 7-foot, 2-inch Falcon Cara for the spinnerbait and a 7-foot composite Falcon Cara for the crankbait.

10. Kayden Effinger and  David Wisler of Murray State caught all their fish on transition banks with sand, rock and wood. They caught every keeper on a 1/2-ounce Accent Jacob Wheeler Spinnerbait with a Storm Largo Shad for a trailer. Though it didn’t produce, the pair also threw a Strike King Coffee Tube with a 3/8-ounce head on places they deemed to be high percentage.