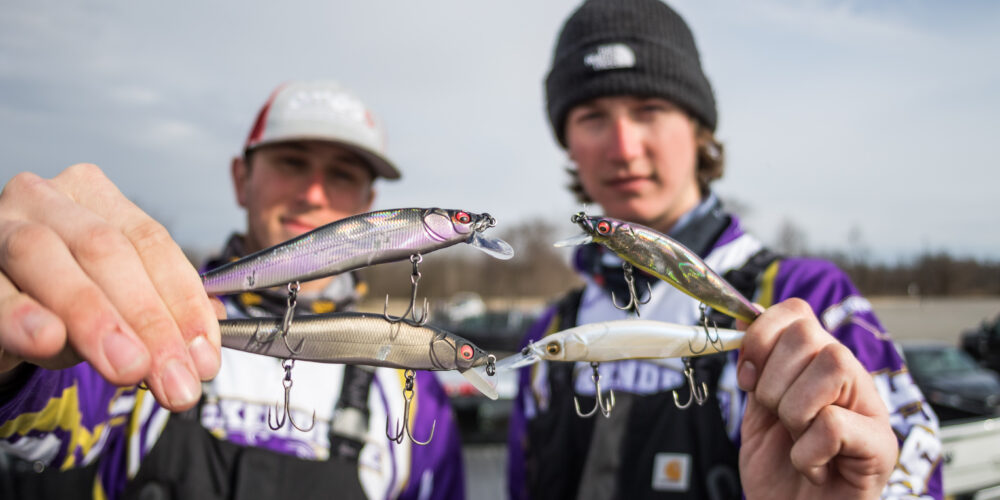 Overall, the bait selection of the top teams didn’t vary much at the Abu Garcia College Fishing presented by YETI National Championship presented by Lowrance on Grand Lake. Some oddball baits made it into the mix, but by and large, it was all about the jerkbait this week on Grand.

With very cold water and the best bite confined to the clearer water in the creeks on the lower end, it’s no surprise that a jerkbait would show out. If you need to expand your arsenal, or you’re headed to a chilly event on Grand, you might consider any of the below.

1. The Drury University team of Cole Breeden and Cameron Smith won the event and relied almost entirely on jerkbaits, using a Jackall Squad Minnow 115, a shallow Strike King Jerkbait and a Megabass Vision 110. On the first two days with sunny conditions, the pair used pro blue and Tennessee shad patterns. With clouds and wind on the final day, they turned to the Megabass in PM twilight chartreuse back.

2. In second, the Murray State University duo of Harbor Lovin and Zachary Martin relied on a jerkbait and a crappie jig. On the normal, jerkbait side of things, the pair used a Jenko Persues 110 in Table Rock and pro blue. For the crappie jig, they used a ¼-ounce head and a Jenko Big T Fry Daddy.

3. Fishing solo, Josh Kelly did most of his damage on a jerkbait this week, relying on the ever-present Megabass Vision 110 in the Ito clear laker color. On the final day, Kelly caught most of his fish on an umbrella rig, using a variety of swimbaits. His two best were the Berkley PowerBait Power Swimmer and the Keitech Swing Impact FAT. Kelley used 3.3-inch swimbaits in black shad for the most part, but he put a 3.8- or 4.3-inch Keitech in black shad or French pearl in the middle of his rig at times as well.

4. Also from Drury University, Beau Browning and Grant Harris did their damage on an umbrella rig, a red Jackall DD Cherry and a handful of jerkbaits. Their best jerkbaits were a Jackall Rerange 110, a Jackall Squad Minnow 115 and a Megabass Vision 110 in pro blue, blue pearl shad and PM twilight chartreuse back.

5. Zachary Potter and Alex Johnson of New Jersey did the vast majority of their damage on a jerkbait this week, mostly relying on a Megabass Vision 110 in elegy bone.

6. The second Racer team in the Top 10, Murray State’s Blake Albertson and Luke Ripple were all about a jerkbait as well. For them, the key bait was a pro blue Megabass Vision 110. The duo say they also caught a few fish on an umbrella rig and an Accent River Special spinnerbait.

8. Not doing anything outside of the mold, Josh Luetkemeyer and Justin Luetkemeyer relied on a YUM YUMbrella Flash Mob Jr.  with shad-colored 3.8-inch Keitech Swing Impact FAT swimbaits on days on and two. On the final day, the pair caught most of their fish on a Megabass Vision 110 in the stain reaction color.