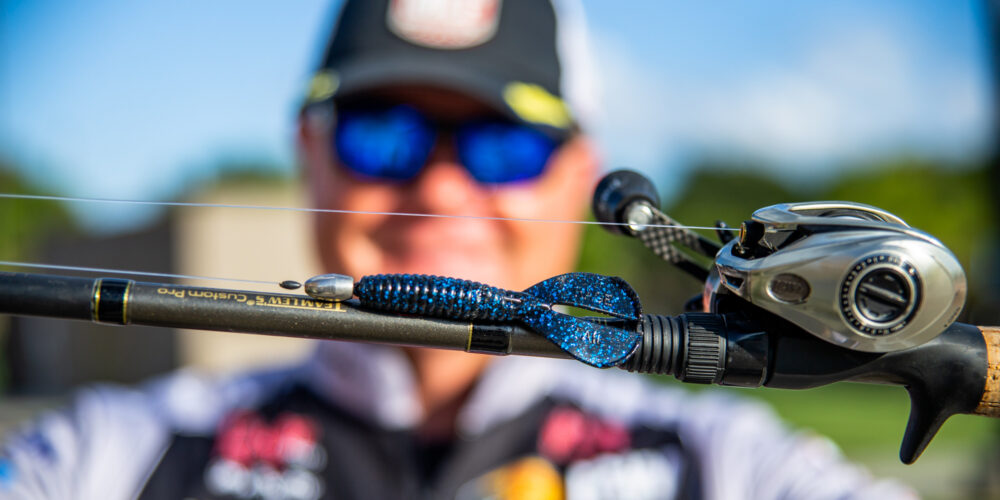 Mark Rose took home the 2020 Patriot Cup trophy from Muskogee, Oklahoma thanks in large part to his dominant display using a Strike King Rage Menace. Rose gives us five reasons why he believes that bait not only won him a tournament but why he likes to keep it in his boat year-round.

Rose found his success on Fort Gibson Lake by targeting green flooded bushes in the backs of creeks. He was able to flip his black-and-blue colored bait through the tight spots in the bushes thanks to the bait’s streamlined profile.

“The Rage Menace has a slender body that goes in and out of cover really well,” Rose detailed. “That’s what makes it so easy to flip. Also, when you want to use it as a jig trailer, it’s easy because that slender body makes it slide underneath the skirt really well.”

The Strike King Rage Menace comes in three different sizes: 3-inch, 4-inch, and the Magnum 5-inch. That variety in size allows Rose to cater to specific situations when he’s out there on the water instead of being pinned down to one specific length.

“I was using that 4-inch model at the Patriot Cup because it was just such a good profile for that lake and that time of the year,” Rose explained. “It’s not a big and bulky profile. It really helped when I was flipping it in and out of bushes. It also imitated those shad really well.”

As Rose mentioned, this bait isn’t just for flipping. Rose was able to put it on the back of certain jigs to add a little—or a lot—more action on the Sooner State lake.

“I love using it as a trailer on football jigs, vibrating jigs, or really any jig that you want to use,” Rose listed. “It’s my favorite swim jig trailer of all time. On the back of a jig, the Menace doesn’t cause any interference with your skirt, but you still get a ton of action.”

4. All Adds Up to Action

Speaking of action, Rose mentions that as one of the biggest reasons he likes using the bait. He says the streamlined body paired with the kicking action of the tail makes the Strike King Rage Menace a solid choice. But there’s also one more factor that adds to the “unbelievable” action according to the Patriot Cup champ.

The final member of the dynamic action trio are the appendages on the side of the bait. Rose refers to these as “phalanges.” While small in stature, the Arkansas pro claims that these make a big difference while the bait is moving through the water.

“Those phalanges catch water really well, adding to the action,” Rose said. “Doesn’t matter if it’s on a jig or you’re just flipping it, those phalanges make a big difference in the overall presentation of the bait.”

While he was flipping his Strike King Rage Menace in Oklahoma, Rose made one minor adjustment that could make a big difference for you. Rose says that usually, when you’re around shad, lightening up your bait is a good call. It allows you to match the color of the shad.

But, if you notice, Rose stuck with the black-and-blue presentation during the Patriot Cup although he was surrounded by lighter-colored shad. That’s because instead of lightening up his bait, his brightened his flipping weight.

“When you’re flipping and you’re around a lot of shad, a lot of people think you have to go to a white bait,” Rose said. “You really don’t need to. I was scraping the paint off my Strike King tungsten weight and giving it a little flash that way while still having my black-and-blue Strike King Menace. That little flash from the weight might be all you need.”

Rose uses a variety of Plano EDGE Series boxes to keep his tackle organized, including the EDGE Terminal Box in 3700 size and the EDGE Soft Plastics and Utility Box.