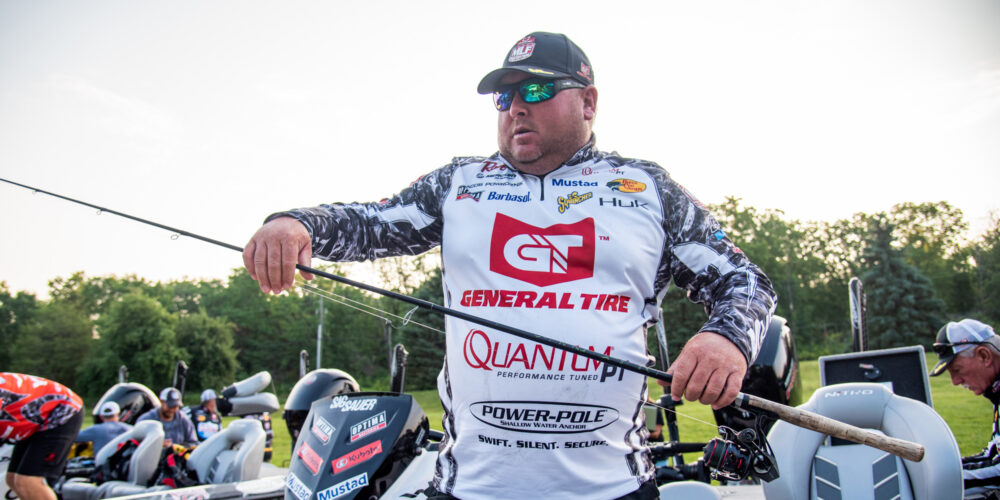 SYRACUSE, N.Y. – Whoever ended up winning the Bass Pro Shops Heritage Cup Presented by Berkley surely earned it as they were forced to fish three varying bodies of water during the event.

They started with the Elimination Round on Henderson Bay of Lake Ontario and then moved to the deep waters of Skaneateles Lake for the Sudden Death Round. Both of those venues were dominated by smallmouth bass.

Finally, they concluded Cayuga Lake, a body of water most in the field had previous tour-level experience on. What they found when they arrived was plenty of vegetation and hungry largemouth bass.

The angler who best handled the gauntlet of changing fisheries was Jacob Powroznik, who totaled 28 bass for 57 pounds, 2 ounces to edge out Aaron Martens for the Heritage Cup win.

Going into the day, Powroznik planned to fish in a way that he knew would help him put up numbers of fish. For him, that was the drop-shot rig.

“I had some experience there and started just targeting keepers. I wanted to start catching fish to get me going,” Powroznik shared. “But, the fish kept getting bigger as I was doing it.”

What he targeted was scattered grass and places where grass transitioned to a bare bottom. “It was 10 to 12 feet of water and the fish were sitting right on the edge of the grass where it started getting spotty with less grass,” he shared.

He fished his drop-shot on a 7-2 Quantum spinning rod with a Quantum Smoke S3 reel spooled with 20-pound Hi-Seas braided line with a leader of 10-pound Hi-Seas fluorocarbon.

For the soft plastic, he used a V&M hand-poured worm as well as other brands and said the color wasn’t important. “I caught some on Morning Dawn, but it really didn’t seem to matter what color you were using,” Powroznik said.

For the rest of the rig, he utilized a 2/0 Mustad straight shank hook with a 3/16-ounce Elite Tungsten weight.

Aaron Martens was able to put up a fierce battle in his attempt to overtake Powroznik and the two fished within sight of each other all day.

“It was a fun day, but Powroznik got me by a little bit. I was about a half-mile from him and could see him catch the fish and then hear the results updated on SCORETRACKER®,” Martens recalled.

He totaled 27 bass for 51 pounds on the day and did so primarily with a spinnerbait.

“I used the drop-shot in the other rounds, but most of my fish during the Championship Round came on a prototype 1/2-ounce Picasso spinnerbait. It did so well in the grass because it had a rounder head that we are going to be releasing it soon,” Martens said.

He had been to Cayuga on past occasions and that gave him a clue about what to target. “There was thick, stringy grass that came from the bottom almost to the surface. I was burning that spinnerbait through it and being later in the year; they wanted that faster retrieve,” he shared.

He fished the spinnerbait on a 7-3 medium heavy rod with a high-speed 8.5:1 Shimano Metanium XG reel spooled with 18-pound Sunline Sniper fluorocarbon line.