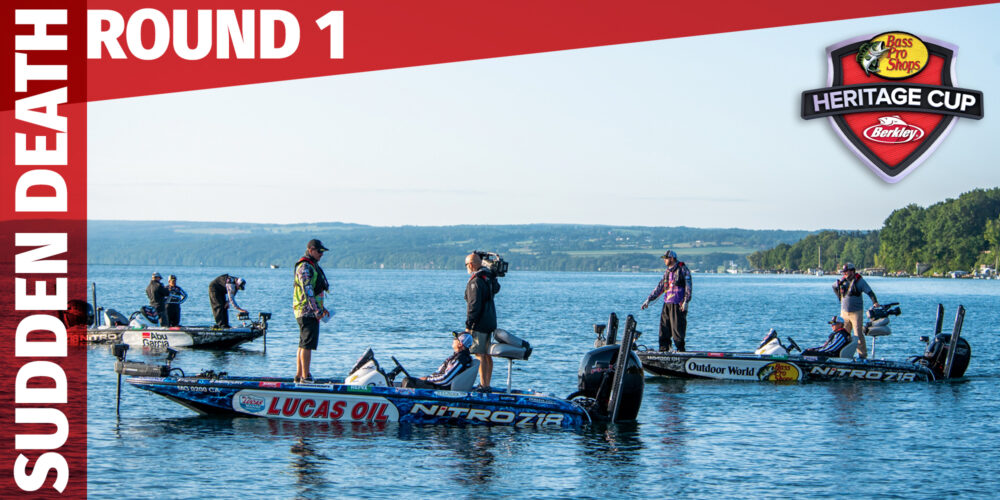 SYRACUSE, N.Y. – Through three Elimination Rounds at the Bass Pro Shops Heritage Cup Presented by Berkley, the Top 18 anglers have been identified. On Saturday, nine pros will fish Skaneateles Lake in Sudden Death Round 1, where they will race to be one of the first four anglers to catch a SIG SAUER Target Weight of 23 pounds.

The nine pros will show up to the boat ramp not knowing where the MLF officials have taken them. They will quickly find out that they are on Skaneateles Lake, which is a finger lake southwest of Syracuse. The glacial lake has a surface area of over 8,800 acres with plenty of structure and cover for the pros to take advantage of.

MLF analyst Marty Stone says that the anglers will hunt for smallmouth along steep walls, rocky banks, points, and rock formations off the bank. For those that want to test their luck with largemouth, the south end of the lake features plenty of aquatic vegetation, boat docks, sail boats and stand-alone floating platforms.

Palaniuk and Roumbanis made it to Sudden Death by winning their respective Eliminations Rounds on Henderson Bay. Both anglers put on world-class smallmouth displays, so look for them to continue the smallmouth trend on Skaneateles.

There isn’t much room offshore on Skaneateles: at its widest, is only 1.5 miles. Still, watch for Aaron Martens to have a drop-shot in hand and searching for smallmouth. Martens finished in second place behind Jacob Powroznik in Elimination Round 3.

How and Where to Watch

The nine competing anglers bring us Sudden Death Round 1 on Saturday, Mar. 7 at 2 p.m. ET on Outdoor Channel.