Omori Out First; Neal, Palaniuk & Lane Moving on to Championship 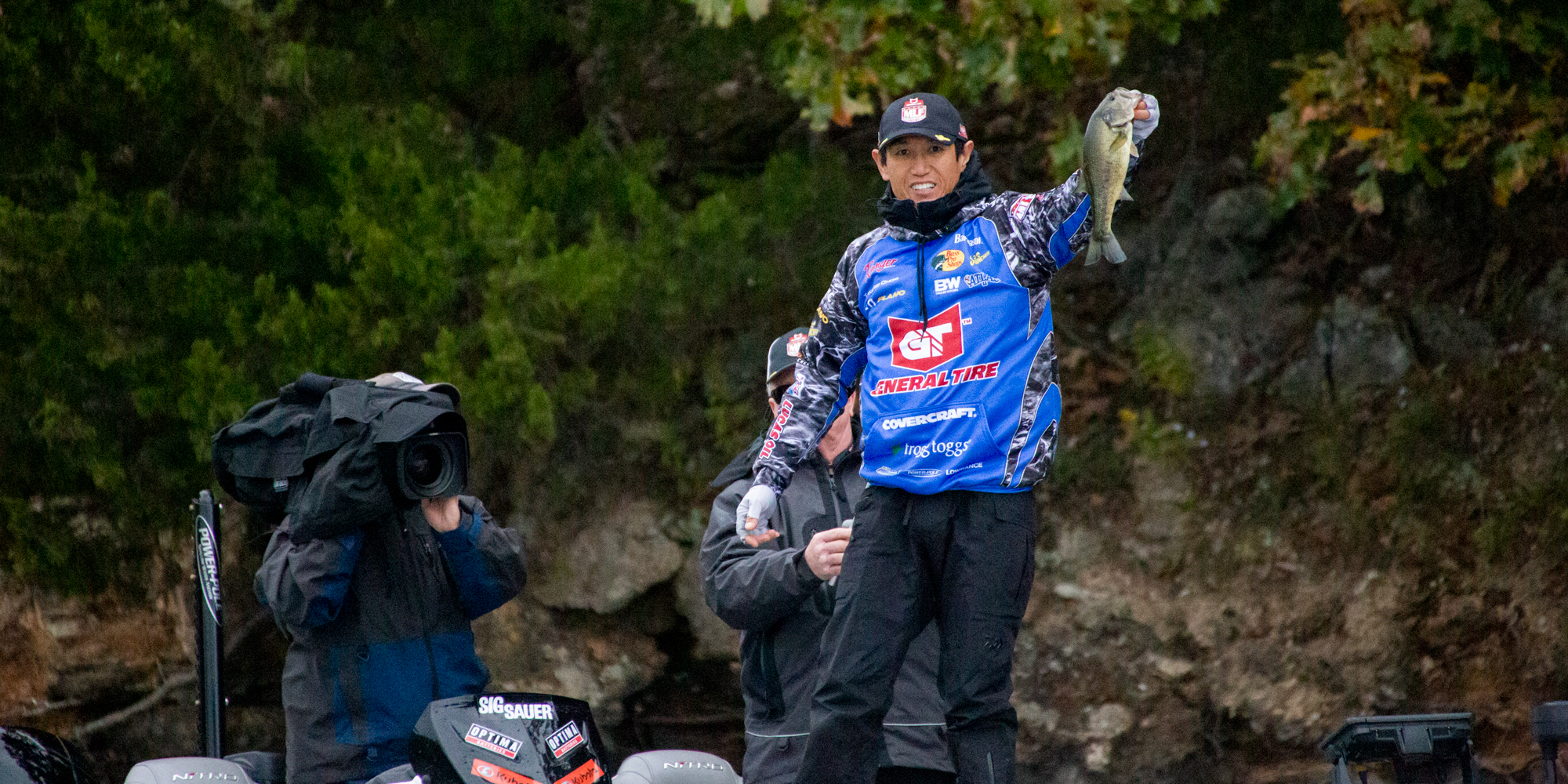 Takahiro Omori was the first angler to reach 17 pounds on Lake of the Ozarks. Photo by Phoenix Moore

OSAGE BEACH, Mo. – Nine anglers began the day with a shot to make it to the Championship Round but only four are moving on after Sudden Death Round 1 of the Wiley X Summit Cup Presented by B&W Trailer Hitches.

Takahiro Omori, Michael Neal, Brandon Palaniuk and Bobby Lane were able to crack the 17-pound Target Weight to secure their spot in the Championship Round. Jared Lintner, Casey Ashley, Jacob Wheeler, Randy Howell and Cliff Pace are heading home empty-handed after failing to reach to Target Weight in time.

Takahiro Omori was the first angler to reach 17 pounds on Lake of the Ozarks. The Texas pro jumped out to a commanding lead in the first period by catching seven bass for 14 pounds, 6 ounces, more than 9 pounds ahead of second-place angler Jared Lintner. Omori found his early success by using a combination of baits and tactics.

“I was looking for a steeper bank with some chunk rock to throw my squarebill crankbait in chartreuse color with a black back,” Omori detailed. “Then, if I was able to find some boat docks, I went with a 3/8-ounce white vibrating jig with a white trailer.”

Omori landed a 2-11 at the beginning of the second period to push himself past the 17-pound Target Weight, putting him into his second Championship Round of the MLF Cup season.

“It’s all about having the right mindset in these Cup events,” Omori said. “When you’re confident in yourself, you’re fishing well. Doing everything your way is the best way to catch them. I’m in a good place right now mentally, so hopefully I can find more success in the Championship Round.”

Neal and Palaniuk Close Behind

While the first period was all about Omori, Neal and Palaniuk were the main headliners in Period 2. Neal was able to boat eight bass for 13-13 in Period 2 while Palaniuk added seven bass for 10-13 to his total.

Both anglers ended the second period just one or two scorable bass away from the 17-pound mark. Neal hooked into a 2-4 largemouth that pushed him past 17 pounds just eight minutes into Period 3.

For Palaniuk, it was the Berkley Big Bass of the Day that sealed his fate. Fishing near a boat dock with a squarebill crankbait, the Idaho pro got a 3-12 largemouth to bite, putting his total weight at 17-2 less than an hour into Period 3.

Lane Holds Off Wheeler and Lintner

Entering Period 3, Bobby Lane only needed 2-6 to reach the 17-pound mark. However, Wheeler and Lintner began to make their run toward the Target Weight, both anglers getting within a pound of cracking the Top 4.

Lane added a 1-7 to his total, making him only one scorable bass away from moving on to the Championship Round. After an agonizing hour had passed, Lane finally got the bite he needed to lock up his spot.

A 1-10 largemouth was the difference-maker for the Florida pro as he celebrated with multiple fist pumps to the onlooking camera boat.

The Wiley X Summit Cup Presented by B&W Trailer Hitches continues with Sudden Death Round 2 on Saturday, June 13 at 2 p.m. EST on Outdoor Channel. Nine anglers will race to be one of the first four pros to reach the Target Weight for the right to advance on to the Championship Round.