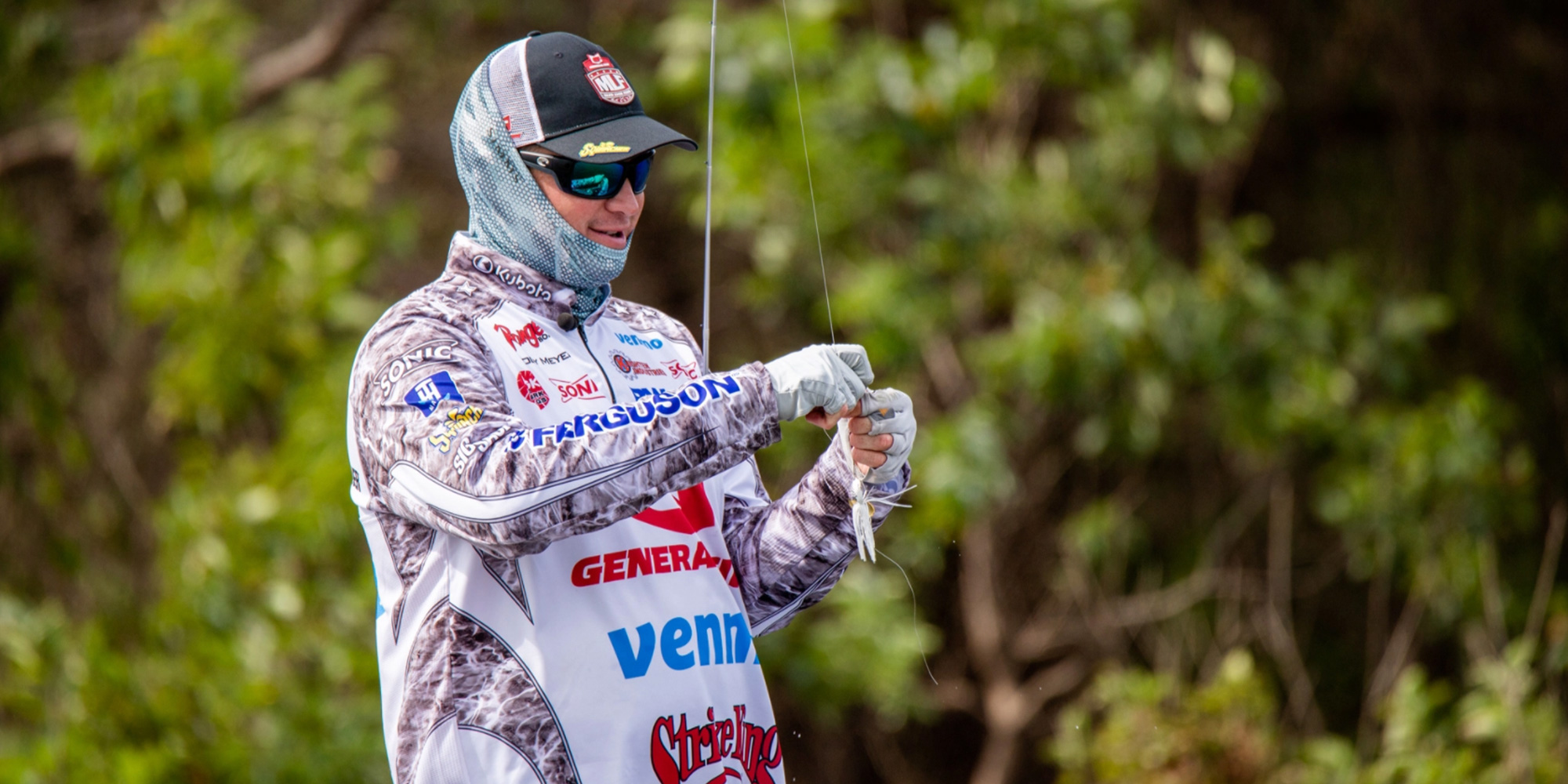 Cody Meyer caught the majority of his 22 bass on a bite-sized spinnerbait. Photo by Joe Branch

MUSKOGEE, Okla. – Elimination Round 2 of the Sqwincher Patriot Cup Presented by Venmo saw 10 more anglers take to Fort Gibson Lake. As always, with the MLF Cup format, the anglers were unaware of where they would be fishing that day until the day began.

Wheeler Sticks with a Buzzbait

Jacob Wheeler doesn’t hide his fondness for a buzzbait and that was his initial plan when he started the day. Although it didn’t produce for him right away, he stuck with it and made a big run to end the day with a victory.

“During the fall, the buzzbait has always been my favorite lure to throw because you can cover water. Even if you aren’t catching a bunch of fish on it, you can start to dial in the pattern and where the fish are,” Wheeler said. “SCORETRACKER® wasn’t going off very often, so I knew the fishing was tough. That told me to stick with the buzzbait until I could figure it out.”

What he discovered through his fast-paced fishing that day was the fish were in the creeks and on flatter points with submerged brush.

“I figured out that they were on the corners of the bushes and once I figured out what to look for, I could run around the lake and go right to what the fish were on,” he shared.

His buzzbait of choice was one he helped to design, an Accent Jacob Wheeler Original Buzzbait that he added a white soft plastic to without a skirt.

California pro Cody Meyer had never seen Fort Gibson Lake before launching and limited the tackle he brought to the event to six or seven rods and small tackle bag. His goal was to simplify things and when the day began, he didn’t go far.

“I started right at take-off and caught two or three pretty quickly on a green pumpkin Strike King finesse jig with a Baby Menace Grub as the trailer. It was an area with some runoff coming out of a pipe and there was a little deeper hole out in front of it,” he said.

He fished the finesse jig on a 7.3:1 Daiwa Tatula SV reel on a 7-foot, 3-inch medium-heavy Daiwa Tatula Elite Brent Ehrler Multi-Purpose rod and spooled the reel with 15-pound fluorocarbon.

As the morning progressed, he noticed small baitfish flickering and decided to match the hatch with a 1/4-ounce white Strike King spinnerbait. Most of the 12 bass for 22 pounds, 9 ounces he caught fell for the bite-sized spinnerbait.

“I was fishing the shady side of the buckbrush and it was funny because I didn’t have a spinnerbait trailer or any trailer hooks. I only brought a few rods and a small tackle bag; it was like I was out fishing a pond and just used what I had with me,” said Meyer.

He fished the spinnerbait on a 7-foot medium/medium-heavy Daiwa Tatula Elite Brent Ehrler Finesse rod with the same reel and line. He opted for a slower 6.3:1 gear ratio for fishing the spinnerbait.