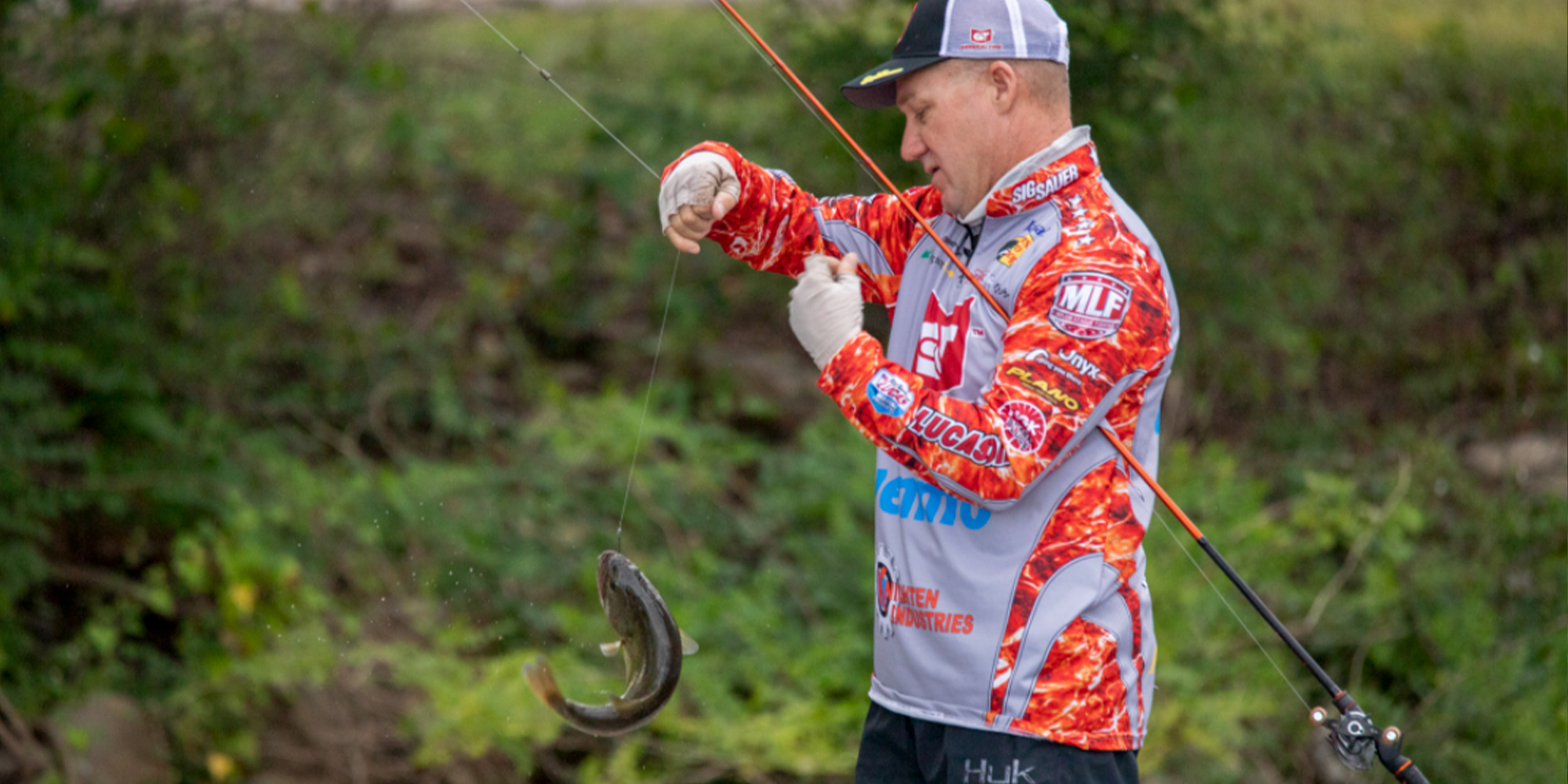 MUSKOGEE, Okla. – The third and final Elimination Round of the Sqwincher Patriot Cup Presented by Venmo saw the last group of 10 anglers launch on Fort Gibson Lake. The high water conditions created a bevy of flooded vegetation and opened up the possibilities for several different patterns to emerge.

Brent Chapman and Ott DeFoe battled it out from the beginning and ended up as the first and second-place anglers for the round.

Chapman’s Creature Bait and Spinnerbait Lead to the Win

Like many in the field, Brent Chapman had some prior experience on Fort Gibson and the zone they were set to fish could not have worked out any better for him.

“We took off in the mouth of my favorite creek on the lake. That is exactly where I would have chosen if we could fish anywhere we wanted to,” Chapman said. “That got me excited right away when we got there that morning.”

Having confidence in the area got him in the right mindset and he went to work with a 4-inch Green Pumpkin creature bait pitched to isolated bushes.

“The water was high and there was flooded cover everywhere, so I focused on the isolated stuff and made my presentations to the edges of the cover,” Chapman added.

He fished his creature bait on a 7-foot, 6-inch KastKing Speed Demon Carolina Rig Rod and paired it with an 8.1:1 KastKing Bassinator Elite reel spooled with 20-pound Gamma fluorocarbon. Chapman rigged the bait with a 1/4-ounce Eagle Claw tungsten weight and a 3/0 TroKar EWG hook.

While the creature bait helped to get him started, the spinnerbait bite was crucial for winning the round. “No matter where you go in the fall, a spinnerbait is going to work. When I want to catch fish and cover water, I gravitate to my confidence lures like a spinnerbait,” Chapman shared and said he again focused on the less prevalent isolated cover.

His bait of choice was a 1/2-ounce chartreuse and white Trophy Bass Company spinnerbait that he fished on a 7-foot KastKing Speed Demon rod with the same reel and line that he used for his creature bait. One adjustment he made was opting for the slower 6.1:1 reel for this approach.

The first thing Ott DeFoe did to begin the day was run to the dam to search for moving water. He found what he was looking for and exploited it with a variety of lures.

“The water was running up there and even though it was still warm, it was cooler. The flowing water was more oxygenated and there were loads of baitfish in there,” DeFoe recalled.

The area had current, rocks, flooded trees, and wood. DeFoe did most of his damage with a small crankbait and a swim jig.

His crankbait of choice was a small homemade flat-sided crankbait with foil sides and a black back to imitate the baitfish. DeFoe fished it on a 7-foot medium-heavy Bass Pro Shops Crankin’ Stick that he matched with a 6.8:1 Bass Pro Shops Johnny Morris Platinum Signature Baitcast Reel that he spooled with 14-pound Bass Pro Shops XPS fluorocarbon line.

For the swim jig, DeFoe went with a white pattern to imitate the shad in the area. “It was a green gizzard shad color and I added a 3-inch Bass Pro Shops Speed Shad swimbait as the trailer,” DeFoe said.

He fished his swim jig on a 7-foot medium Bass Pro Shops Johnny Morris Platinum Signature Series Rod with the same reel that he used for his crankbait. He spooled the reel with 17-pound Bass Pro Shops XPS fluorocarbon.