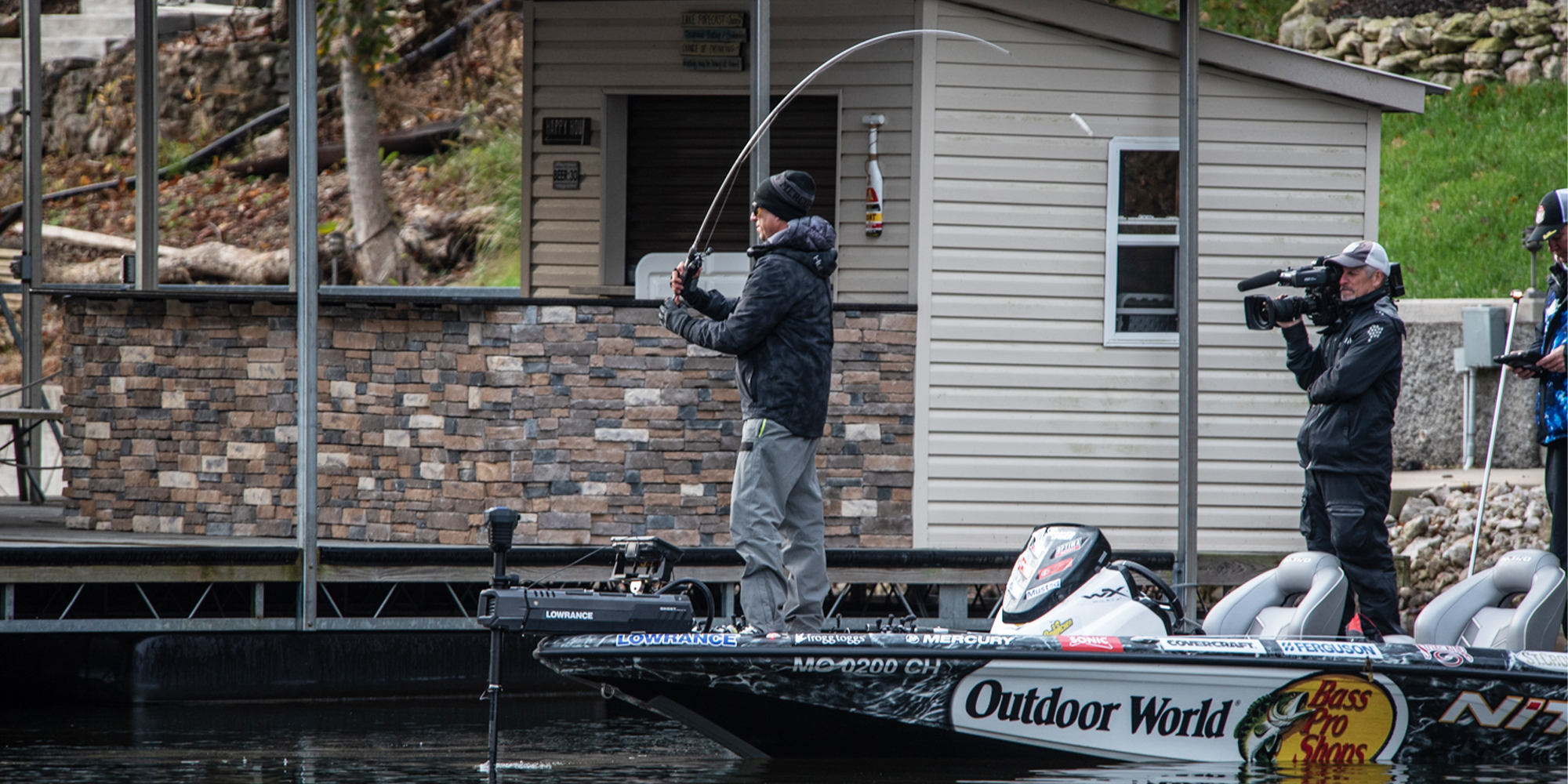 Brent Ehrler used a variety of baits to take first place during Elimination Round 3. Photo by Garrick Dixon

OSAGE BEACH, Mo. – The third and final Elimination Round of the 2020 Wiley X Summit Cup Presented by B&W Trailer Hitches sent 10 more anglers to Lake of the Ozarks.

Winning the round was California’s Brent Ehrler with 23 bass for 33 pounds, 11 ounces. Bobby Lane, Edwin Evers, and Jacob Wheeler joined Ehrler to form the four to advance to the Sudden Death Rounds.

Ehrler Cranks, Jerks and Wacky Rigs to the Win

While Ehrler had long heard of Lake of the Ozarks, it was his first trip to the famed fishery. The first thing he noticed during the ride around was the sheer number of boat docks on the lake.

“Because there were so many docks, I looked for areas with fewer docks and found a channel swing about halfway back in a creek to start,” Ehrler recalled. “I would fish a crankbait parallel to the bank in between docks  and then fish a wacky rig behind docks or if I came across an isolated laydown.”

Ehrler said he was fishing a medium-running crawfish colored crankbait and a 5″ Green Pumpkin Yamamoto Senko on a wacky rig and caught about the same number of bass on these two lures.

For the crankbait, he opted for another of his signature rods, a 7’2” medium glass cranking rod in the Daiwa Tatula Elite lineup. He chose a 6.3:1 Daiwa Tatula SV reel that he spooled with 10-pound Sunline Sniper fluorocarbon.

Once the wind picked up, so did Ehrler’s pace and he did his damage with a variety of jerkbaits. “That’s when I started catching them and I figured out that the fish were on the outside corners of docks on the sunny side,” he said.

The docks were deep, many in 20 or 30 feet of water, but the bass were suspended, ganged up and biting. “I’ve never had that many doubles in a day of fishing and when you caught one, there were three or four following it,” Ehrler said and added that if that happened, he would come back a few minutes later and use a different jerkbait.

He relied on a variety of shad-patterned jerkbaits, including the Lucky Craft Lightning Pointer 100 and a Staysee 90. His jerkbait rod of choice was a 6’9” medium-light Seth Feider signature series Daiwa Tatula Elite paired with the same reel and line that he used for cranking.

When he learned they were headed to Lake of the Ozarks, Bobby Lane immediately thought of jigs and buzzbaits and that’s exactly how he caught them.

“I’d never been there but always heard how good the jig and buzzbait bite is there during the fall. Right away, I caught one on a jig and went to the back of the pocket and got one on a buzzbait,” Lane said and added that he targeted shallow water, less than 5 feet throughout the day. “It was so much fun and I got some of the best buzzbait blowups I can remember.”

He estimated that he caught about the same number of bass on the jig and buzzbait as he amassed 19 bass for 31 pounds, 12 ounces.

“The bite stayed steady all day and I was just running the bank and catching those ‘roaming fall bass’ that you see that time of year. I would throw the buzzbait when going between two docks and then pick up the jig when I got to a piece of cover.”

His buzzbait was a 3/8-ounce black-skirted version with a gold blade and he opted for a 7’3” medium-heavy Abu Garcia Fantasista rod and a 10.1:1 Revo Rocket spooled with 50-pound Spiderwire braid.

“That fast retrieve was crucial because it kept the buzzbait right on top, it was effortless,” he shared.

The jig of the day was a 1/2-ounce black and blue hand-tied jig with a Berkley PowerBait Power Chunk Jr. in Flippin’ Blue. Lane fished it on a 7’ medium heavy Abu Garcia Veracity Rod with an 8.0:1 Abu Garcia AL-F reel spooled with 15-pound Berkley Trilene 100% fluorocarbon.