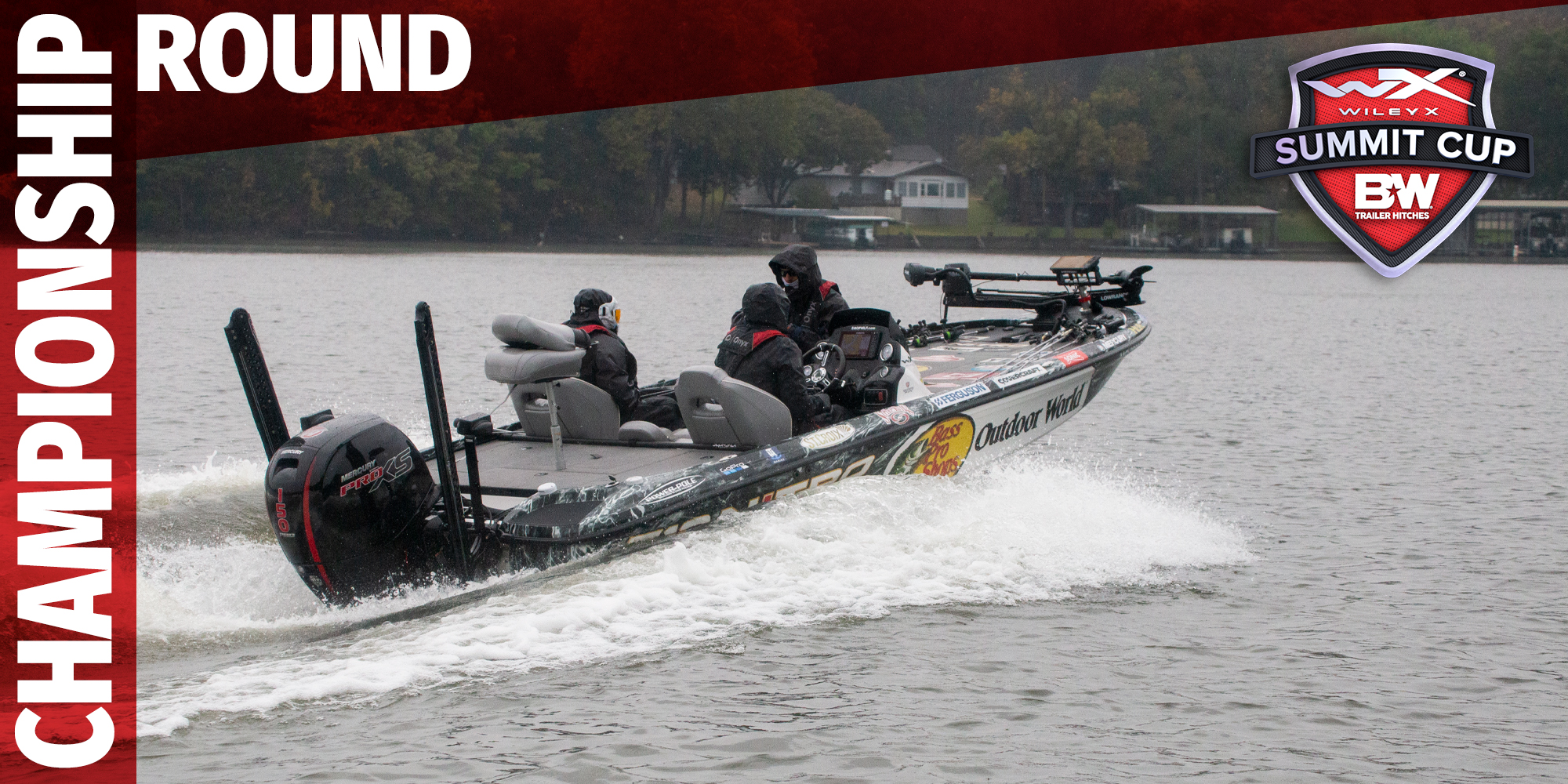 Eight anglers hit the Lake of the Ozarks one last time as they battle for the top spot and title of Summit Cup champion. Photo by Phoenix Moore

OSAGE BEACH, Mo. – Through five rounds of the 2020 Wiley X Summit Cup Presented by B&W Trailer Hitches, some of the best anglers in the world have been battling it out on Lake of the Ozarks. The eight anglers who have weathered the chilly temperatures throughout the week and made it to the Championship Round now have their shot at raising the 2020 Summit Cup trophy.

Brent Ehrler, Bobby Lane, Cody Meyer, Andy Montgomery, Michael Neal, Takahiro Omori, Brandon Palaniuk and Scott Suggs will all fish for three periods in hopes that when the clock runs out, they will be the man left on top of SCORETRACKER®.

Changing Locations on Lake of the Ozarks

A new round means a new area, one the anglers had no idea they would be fishing until they pulled up to the boat ramp. The eight pros will be fishing in the Niangua Creek Arm of Lake of the Ozarks. This area has over 78 miles of shoreline and over 4,300 surface acres.

MLF analyst Marty Stone says there are numerous areas that these anglers will be able to find bites in Niangua Creek.

“This zone is filled with boat docks, laydowns, marinas and retaining walls,” Stone listed. “There’s also the rock formations that this lake is so famous for. There’s plenty of options for these anglers to look to target.”

It was a cold and wet day in central Missouri when the Summit Cup was filmed in October of 2019. The leaves are changing and the temperatures are falling. While that may be uncomfortable for the eight pros trying to win a championship, Stone says these conditions are an Ozark bass’ picture-perfect day to feed.

“The two most important elements in today’s competition is the season and the weather,” Stone explained. “When you get wind and rain in the fall, these fish flat-out bite. Each of these anglers have made major adjustments through their first rounds of competition. Today is going to be about who can adjust to their environment the quickest and most effectively.”

A Lot at Stake in the Show-Me State

Not only can the anglers secure a highly-coveted Summit Cup trophy, but they can also clinch a spot in the 2020 General Tire World Championship with a Top-3 finish in the Championship Round.

In the Championship Round field, only Brent Ehrler, Andy Montgomery and Michael Neal have already secured a spot in the World Championship. As for the remaining five anglers, if they are out of the running for the top spot, watch for them to try and make a move toward the Top 3 as the day winds down.

The anglers will fish for three periods in Niangua Creek on Lake of the Ozarks to try and catch more weight than the rest of the field. The angler on top of SCORETRACKER® after three periods will be the 2020 Summit Cup champion.

The eight competing anglers bring us the Championship Round on Saturday, June 20 at 2 p.m. ET on Outdoor Channel.