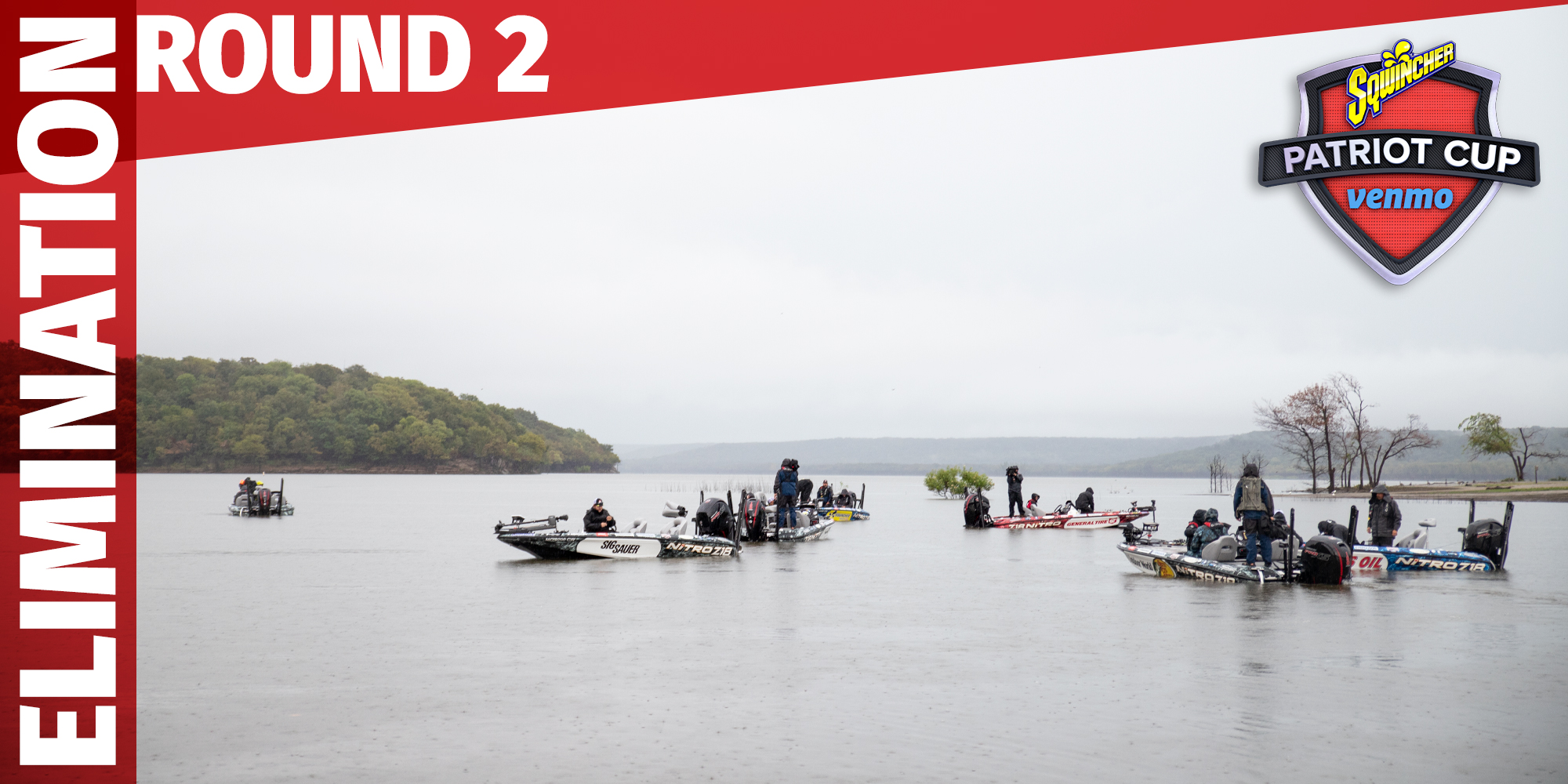 Ten new anglers backed their boats into Fort Gibson Lake in Muskogee, Oklahoma for Elimination Round 2. Photo by Joe Branch

MUSKOGEE, Okla. – Ten new anglers backed league boats into Fort Gibson Lake for Elimination Round 2 of the 2020 Sqwincher Patriot Cup Presented by Venmo. This field of 10 might be one of the most stacked fields in an Elimination Round that we have ever seen during an MLF Cup event. However, stormy weather threatened to end the day earlier than expected.

The anglers had no idea where they would be fishing to begin their day until they pulled up to the boat ramp and saw the signs for Fort Gibson Lake. If they have fished on this body of water before, MLF analyst Marty Stone says that it’s not the same lake they know from previous experience.

“Fort Gibson Lake is a lake of change right now,” Stone explained. “The anglers will fish the upper-third of the lake where it has 104 miles of shoreline and over 5,700 surface acres. The water has been high, but it’s falling, and that’s a good thing.”

Heavy wind and rain blew through the eastern Oklahoma area the night before, adding even more water to an already swollen lake. Still, even with added rain, that falling water level continues to be the story that Stone has his eye on for Elimination Round 2.

“These fish are going to be pulling out of the cover,” Stone predicted. “Earlier this year, the water level was 30 feet higher than normal, pushing a lot of the fish and baitfish into the woods. But now, with the water level receding, the fish should be more accessible than they have been in a long time on this lake.”

Thanks to their finishes in Stages Five and Six, they qualified for the 2020 Patriot Cup. But a lot of the pros didn’t sneak in or barely qualify because there are a handful of proven champions in this group of 10.

We start with Edwin Evers, the man who dominated the 2019 Bass Pro Tour season with Stage Two, Points and REDCREST championships. He will be a big name to look out for in his home state of Oklahoma.

Jeff Sprague finished second to Evers in the Points Championship Race in 2020, but took home a win of his own in the 2020 Challenge Cup in Bull Shoals, Arkansas earlier this year. Watch for the Texas pro to try and win his second Cup trophy of the 2020 season.

Andy Morgan took home a trophy during Stage Four of the 2019 Bass Pro Tour in his home state of Tennessee. Morgan is always an angler to keep on the radar as someone who can win at any lake in the country.

Speaking of Stage champions, look no further than Aaron Martens. The Alabama pro took home the 2019 Stage Six championship on Table Rock Lake. Martens has 11 career wins to his name.

If it wasn’t for Edwin Evers, Jacob Wheeler might have had the most impressive 2019 season. Wheeler is the reigning 2019 General Tire World Champion, the 2019 Stage Seven champion, and the 2020 Stage One winner. Wheeler can catch them no matter where he is and should be a favorite to make a run at the Patriot Cup trophy.

Casey Ashley, Cody Meyer, Fred Roumbanis, Michael Neal and Justin Lucas have yet to win an MLF event. All are seasoned MLF veterans, so they will all be looking to make a deep run in the Patriot Cup.

The 10 competing anglers bring us Elimination Round 2 on Saturday, April 11 at 2 p.m. ET on Outdoor Channel.