FANTASYFISHING.COM INSIDER: Crafty TITLE Picks That Are Sure to Put You on Top 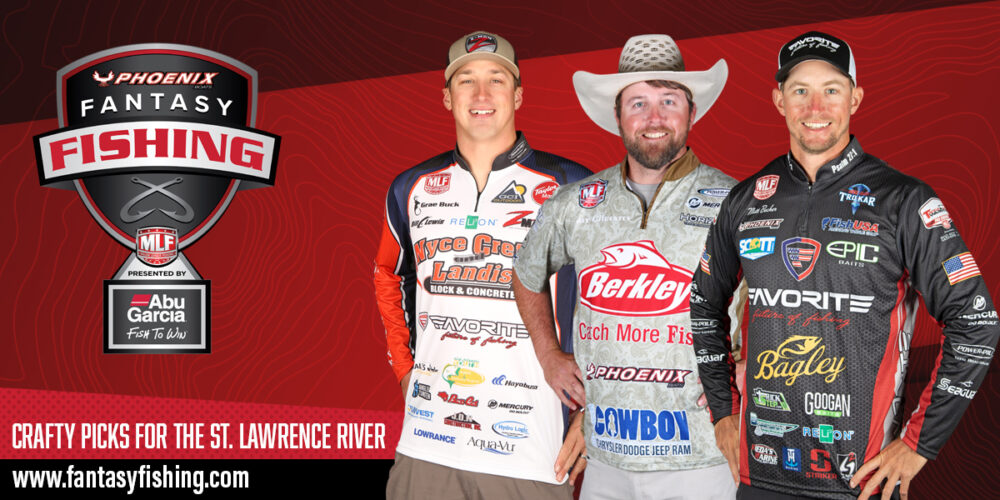 I personally don’t really like picking for championship events that much. Though all the anglers in the field are obviously excellent, the limited size doesn’t give me a feeling of freedom and often leaves a local or technique specialist out in the cold. Still, the roster for the Tackle Warehouse TITLE Presented by Mercury is a very good one, which shouldn’t make picking for Phoenix Fantasy Fishing Presented by Abu Garcia feel too cramped, except for the mandatory angler below 40th in the standings.

For this event, there are a few obvious anglers with a lot of smallmouth and St. Lawrence River experience, but you’re likely going to need to throw a dart or two at some point. Hit the right angler, and you might hit the jackpot, because in the short history of the TITLE, the winners have generally been a little unexpected.

One thing is for sure, this event will provide a good chance to pick up a lot of ground if you do well. Choosing a bunch of anglers who make it to the Knockout Round or the Championship Round should really put on the pounds.

For Group A, I went with Matt Becker, Skeet Reese, Kurt Mitchell, Joey Cifuentes and Andrew Loberg. Group A isn’t quite as locked and loaded as Group B, and I suspect that making the right choices here will be a big difference-maker in the event. There are plenty of smallmouth experts in the group, but Spencer Shuffield hasn’t proven to be an expert on the St. Lawrence yet (it’d be a different matter if Lake Ontario was open) and even Becker hasn’t been his usual invincible self in the heavy current of the Big Larry.

Get Western with Skeet

Reese honestly has an up-and-down history on the St. Lawrence, with most of it coming years ago on the Bassmaster Elite Series. Still, between finishing 78th and 93rd, he’s also made the Top 20 a couple of times, and he’s done well in MLF competition there, too. Lately, Reese has really fished for shallow smallmouth really well, and a lot of his success on the St. Lawrence has come doing that. If you’re all-in on deep fish, Reese isn’t your guy. But if you’re looking for a Scott Dobson replacement, it’s a good bet that “black and yellow” will be slinging a jerkbait to load the boat.

Mitchell is Ready for Deep or Shallow

The winner of one of the 2020 Toyota Series events on Lake Erie, Mitchell is a really stupendous smallmouth angler with a knack for going a bit off the beaten path. In years past, he’s seen success both deep and shallow on the St. Lawrence, and I suspect he’ll have a good game plan for this event. Notably, he’s also caught fish throughout the river, and with 25 pros or fewer on the water each day, I suspect he’ll have almost infinite space to work if he chooses to fish east of Clayton.

Looking for Redemption for Cifuentes

Last year at the Tackle Warehouse Pro Circuit season finale on the St. Lawrence, Cifuentes dropped the ball in a big way on the final day, giving up more than a 6-pound lead. I figure he’s out for revenge this year, and after a good showing at Champlain, he has his smallmouth shoes laced up and ready to roll. Plus, before the final day, Cifuentes was fishing both deep and shallow, which I think bodes well for a tournament that could lean toward the deeper side.

Some of Group B is truly “set and forget,” but there are also some tough decisions to be made here. For B, I went with Michael Neal, Justin Lucas, Jon Canada, Ron Nelson and Grae Buck. I think some other really interesting potential picks in Group B are Nick Hatfield and Martin Villa, both of whom have been fishing great lately and have a moderate amount of St. Lawrence experience.

Don’t Go Without Neal and Lucas

Finishing first and second in the Angler of the Year race, you shouldn’t go without Neal and Lucas in this event. Neal doesn’t have quite as much time on the river as Lucas does, but he has enough. He should fish deep and can fish everything Cody Pike won off of last year. Lucas has a ton of knowledge of the St. Lawrence, and has proven to be a smallmouth maestro everywhere he goes. I really can’t imagine many teams won’t have both Lucas and Neal on them.

Get You Some More Canada

Fishing close to the country that shares his name, Canada should have a really good shot to do well in the TITLE. He’s put in some serious hours on Lake Ontario lately, and on windy days he’s often in the river. Last year, Canada was whacking them deep, and he has achieved a new level with his smallmouth fishing where he’s comfortable in either scenario. Plus, it sounds like Bella the Labrador Retriever is going to be on board for some of the action, and you know she’s guaranteed good luck.