MLF FANTASY INSIDER: Our Insiders Make Their Crafty Fantasy Picks for Stage One 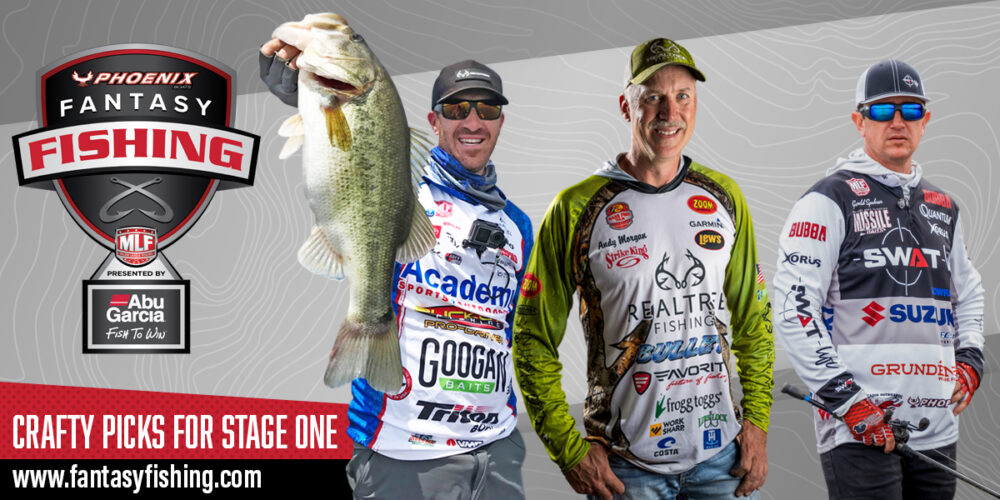 As we head into this first of seven events for the 2022 season, the MLF Insiders Joel Shangle and Mason Prince have decided to let the public in on some of their picks. With plenty of access to anglers throughout the year and a lot of time spent researching the competition waters, our MLF Insiders are well equipped to figure out who will do best on derby day.

All of the pre-tournament chatter you’re hearing about the weather in northeast Louisiana is true: Thursday morning greeted us with freezing rain and snow, and nighttime lows are expected to plunge into the low-20s through the first two days of the tournament. The simple translation is that the first half of the competition will be a grind, and there’s no better grinder in this field than Andy Morgan. Skimming through Morgan’s voluminous list of career Top 10s, you quickly pick up on a pattern: the East Tennessee pro is at his best when fishing is tough. His flipping accuracy is uncanny, and with these bayou largemouth locked down and unwilling to move in the frigid waters of Lake D’Arbonne, every centimeter matters.

Until he proves otherwise, you’d be a fool not to put Ott DeFoe on your team. For ANY game. DeFoe has proven beyond a shadow of a doubt that he can catch fish on any body of water, in any competition format and under any weather condition. And while his Bass Pro Tour wins in Texas and Florida have come on the types of baits that would seem to be an ill fit for the conditions shaping up for Stage One, DeFoe’s biggest strength as an angler is his ability (and willingness) to change things up on the fly. He just figures it out and makes it work, and I believe he’ll do the same all the way into the Championship Round in Monroe-West Monroe.

If REDCREST 2021 proved anything, it’s that Dustin Connell is a legitimate threat to win a tournament in just about any condition you throw at him, and at any time of the year. His resume is loaded with standout performances in places with dirty, shallow water – his first tour-level win at Ross Barnett Reservoir, for example – and he’s proven that he can make the right adjustments at the right time when Plan A and Plan B don’t work out. His REDCREST win is a prime example: Connell entered the week determined to fish the bank at Lake Eufaula, but scrapped that plan and moved to offshore brush when his shallow bite faltered. Connell is on my team this week, he should also be on yours.

If you run into Bryan Thrift at the gas station heading out to Lake D’Arbonne, he’ll tell you that he isn’t going to catch a single fish all week. Don’t believe him. The North Carolina pro is notoriously self-effacing, but also notoriously excellent in the first tournament of any season, no matter what the fishery (he has nine Top 10 finishes in season openers, including eight Top 5s). I expect him to tough it out in the qualifying competition at Stage One and advance on to Caney Creek Reservoir and the Knockout Round. It’ll turn into a horserace once we reach the final two rounds on Caney Creek and Bussey Brake, and Thrift is a horse I’m willing to bet on, every time.

Mississippi pro Cliff Pace is one of a handful of anglers fishing this week who have some experience in northern Louisiana – he, Edwin Evers and Chris Lane earned Top 10s in an Open held on the Ouachita River in the early 2000s – but that distant success isn’t what wins Pace a spot on my fantasy team at Stage One. Like Morgan, “Game Face” Pace excels at putting his head down and grinding, and in my opinion, the first two competition days on D’Arbonne will favor the bulldogs. The weather won’t phase Pace, nor will a tough bite. This is a sneaker pick, but I believe it’ll pay off.

Let’s face it, Jacob Wheeler is the hottest professional angler on the planet right now, and that has to count for something, if not a lot. Forget that he’s the reigning AOY and the winningest angler in Bass Pro Tour history (five event wins in three years)—he also has experience winning in the MLF format in the state of Louisiana. Wheeler won the 2019 General Tire World Championship in Vidalia, LA. Watch for Wheeler to get off to another hot start, as in his three previous season-opening events on the Bass Pro Tour, he has qualified for three Knockout Rounds, including a win in 2020.

If you want local knowledge, look no further than Louisiana native Gerald Spohrer. He’s coming off of his best season on the Bass Pro Tour to date, in which he finished eighth in the AOY race. Spohrer said earlier in the week that all three fisheries (D’Arbonne Bayou, Caney Creek Reservoir and Bussey Brake) are in the same region of the state, but they’re all very different. To me, that means that local knowledge combined with practice time are going to be a huge factor. With one practice day canceled because of the weather, I tend to lean more on the side of local knowledge for this one. Give me Spohrer to have a solid performance.

There’s just something about Jeff Sprague that I can’t shake. The man has been the model of consistency since joining the Bass Pro Tour. He has three straight Top-10 finishes in the AOY race—ninth in 2021, fourth in 2020 and second in 2019. It doesn’t matter where he goes in the country, the man knows how to catch ‘em. Out of 19 regular-season events on the Bass Pro Tour, Sprague has made the Knockout Round 16 times. While he has yet to grab his first win on the Bass Pro Tour, he is a winner in the MLF format with a 2020 Challenge Cup trophy on his mantle. I always say there are three certainties in life: death, taxes and Jeff Sprague making the Knockout Round.

Zack Birge is another pick that I have just based on the consistency he’s shown during his time on the Bass Pro Tour. The man from Oklahoma has qualified for the REDCREST three years running but is still looking for his first MLF win. Birge might be my dark horse out of this group, but he has massive upside potential.

The rules for the Fantasy Fishing state that you must pick at least one angler who is outside of the Top 40 in the AOY standings in each group. My first four picks that I gave you were all inside the Top 40. However, going outside of the Top 40 and I’m still able to grab Louisiana native Keith Poche? Sign me up. Poche was born and raised in Natchitoches, Lousiana before moving to Alabama later on in life. Poche has a YouTube series called “Off The Grid” in which he finds himself fishing hard-to-reach spots all over the country, navigating wooded areas with his aluminum boat. Poche is familiar with Louisiana fishing as well as finding places that other anglers in fiberglass boats won’t be able to get to due to the terrain. I believe Poche is a solid pick to round out your Group B choices.

Make your picks at FantasyFishing.com before 8 a.m. EST on Saturday, Feb. 5.