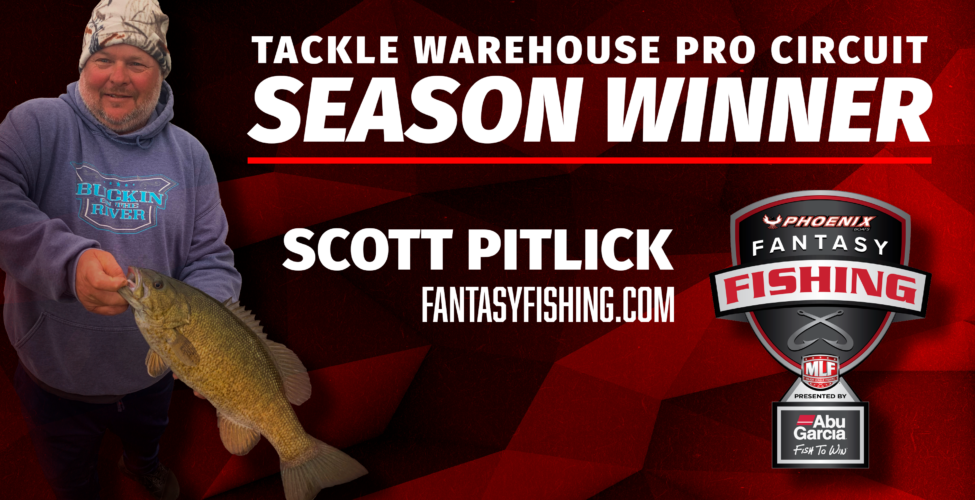 Out of thousands of players and seven events of the Tackle Warehouse Pro Circuit season, there was only one Phoenix Fantasy Fishing Presented by Abu Garcia worldwide champion: Scott Pitlick of Pierre, South Dakota. The 53-year-old won with a year-long total weight of 3,206 pounds, 2 ounces.

Pitlick is no stranger to fishing or fantasy fishing, having fished competitively since 1986 and played fantasy fishing since the early 2000s. Pitlick joined a league with some friends on FantasyFishing.com and ended up doing better than he ever could’ve dreamed.

The South Dakotan made his picks like everyone else for Stop 1 on Sam Rayburn Reservoir without too much thought or effort, since it was just the first event of the year. Pitlick was shocked to find that out of all of the entries online, his team ended up in 20th place.

“That really got me locked into trying my hardest to win the whole thing,” Pitlick said. “From then on I was committed to doing the work and putting the time in. I was ready to let the chips fall where they may.”

Pitlick dedicated plenty of time, effort and research before making his picks for each stop — nearly four hours of it. He would look at previous finishes, and local hammers as well as who was riding a hot streak. The research definitely helped, but his main strategy proved to be the most fruitful.

“I took a ‘ride or die’ strategy when I saw that the scoring format was based off of their total weight for the tournament,” Pitlick said. “I decided from the beginning that I was going to take Michael Neal, Justin Lucas and Spencer Shuffield in every event. It just so happened that they all ended up as the top three in the AOY standings at season’s end.”

While those three remained the same, the other seven spots on his roster rotated constantly. Even with all the changes, Pitlick’s team was a model of consistency, never finishing below 500th in the worldwide standings.

“As the season went on, I kind of discovered my picks turned into something I called the ‘3-7-10’ rule,’” Pitlick explained. “I would have three guys make the Top 10 and seven make the Top 50 out of my 10 picks. That consistency absolutely helped in a big way.”

Getting Real at the TITLE

Even though he continued to build solid finish after solid finish, Pitlick never felt as though he had a shot at ending the season on top. That is, until the first day of the TITLE on the St. Lawrence River.

“I picked a perfect lineup on the first day, as my guys were the top five on the leaderboard. Joey Cifuentes, Kurt Mitchell, Dakota Ebare, Andrew Loberg and, of course, Spencer Shuffield,” Pitlick said. “After that, I really felt like I had as good of a chance as anyone to win.”

After the TITLE ended and everything became official, Pitlick ended the year on top of the leaderboard by just 26-9. Pitlick won a Tackle Warehouse prize pack and the fishing trip of a lifetime with Bass Pro Tour angler and REDCREST III Champion Bobby Lane. When Pitlick finally got the call, it was a mix of shock, excitement and gratitude.

“It was a little euphoric,” Pitlick said. “It took some time for it to all settle in. The prize pack they sent me was amazing and I’m so appreciative. To put all the work in and have it pay off in this way is amazing. It’s been a lot of fun.”