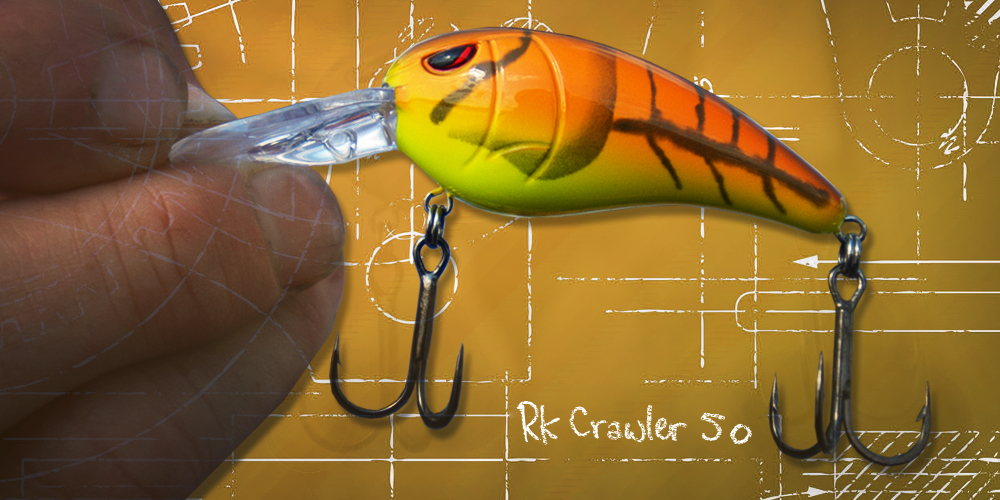 We asked MLF pro Mike McClelland for one bait and five reasons why he loves that bait for the end-of-summer/start-of-fall transition that’s quickly approaching. McClelland’s choice: the RkCrawler 50 by SPRO, a wide-wobbling crankbait that McClelland says is perfect for that seasonal lull when fish begin to escape the dog days of summer, but aren’t quite on an aggressive fall bite.

First, the qualifications: To say that McClelland was born with a crankbait in his hands is a little bit of an exaggeration – but it’s not too far off. McClelland grew up and learned to fish in the Motherland of crankbait fishing, the Ozark Mountains region of Missouri/Arkansas, catching his first fish on a crankbait at the age of 10.

McClelland designed the RkCrawler 50’s larger cousin (the RK 55) in 2014, a crankbait that became a quick go-to for anglers looking for a versatile, wide-wobbling bait with a definitive hunting action. But almost as soon as the RK 55 hit the pegs at Bass Pro Shops and Cabelas, McClelland was already campaigning SPRO for a smaller version.

“The RkCrawler 55 was the crankbait that I’d always wanted,” McClelland said. “I grew up fishing Table Rock, Beaver Lake, Bull Shoals, Grand Lake … places where I’d always wished for a bait that had the type of action and depth range that we hit with the RkCrawler 55. But almost as soon as SPRO put out the 55 size, I started asking for a smaller-profile 50 mm size.”

At 50 mm and 5/16 ounces versus the 55 mm/1/2-ounce size of the original RkCrawler 55, the RK 50’s smaller profile is perfectly suited to the smaller forage and pressure-sensitive bass that define the September/October time frame.

One characteristic that has defined Ozarks-influenced baits like the original Wiggle Wart and the RK 55 is a legendary “hunting” action that causes baits to kick harder to one side or the other upon contact with the bottom. One of the RkCrawler 50’s most attractive characteristics is the same hunting action as the 55, which is made possible because of the shape and width of the bill.

“When I designed the bait, I didn’t want a bait that deflected off the bottom and then came back to ‘true’ immediately,” McClelland said. “The RK 50 deflects and hunts. Whatever direction it gets kicked, the flatness and width of the bill grab more water and make the bait roll a little to that side before it ‘trues up’ again. It’s going to hunt a little before it comes back to ‘true’, and that’s probably the biggest factor why the bait’s action works when others won’t.

“There are times of the year when you want that tight, true action, but once fish start edging shallow again at the end of summer, the RK 50 is the first crankbait I’ll pick up because of that action. I really believe that when fish are a little more lethargic – like they are when they just barely get out of summer mode – the action of this bait will generate more strikes. ”

The RkCrawler 50’s packaging professes a depth range of 4 to 9 feet, but McClelland isn’t afraid to throw it in shallower water depending on the cover, or crank it a little deeper with lighter line. But regardless, that 4- to 9-foot range is a key depth for McClelland in late summer/early fall.

“As long as you have fish in the upper 10 feet of the water column, you can reach those fish with the RK 50,” he said. “The simple fact is that we have shad, bream, perch, a lot of different forage in that depth range. I wouldn’t be afraid to throw the RK 50 in a foot of water and start it cranking diagonally, but it’s designed to be the most effective fishing the right cover in the 4- to 9-foot range.”

Varying water clarity and diverse forage require even the most basic crankbait box to contain an array of colors, and according to McClelland, the RkCrawler 50 thoroughly covers the range of proven fish-catching colors, with 12 currently on store pegs and four additional colors hitting the market soon.

“You never want to be pigeon-holed into having limited colors, so the RK series covers everything from shad to bream to the variety of craw colors you’ll see across the country,” he says. “There are some solid, opaque colors and some really cool, translucent ‘Phantom’ colors that are key for clearer-water situations. That all goes back to the 50 being a versatile bait: you’re able to fish in water that ranges from stained to gin-clear.”

Fishing with McClelland on the Upper Mississippi River this summer, I watched him catch both smallmouth and largemouth on the RkCrawler 50, throwing it to riprap, sand bars and laydowns, and that versatility is what ultimately puts the 50 high on his list of baits for late summer and early fall.

“There’s just all kinds of different situations you can fish with this bait because of that wide-wobbling, hunting action­,” McClelland confirms. “I’ll throw it on boat docks, gravel banks, out on shell beds, basically just about anywhere with a hard bottom. It’s not designed to be like a squarebill where I’m throwing it into laydowns all the time, but I can downsize or upsize the hook without killing the action, so I can switch the No. 5 Gamakatsu hooks to a No. 6 Gamakatsu if I’m throwing it around a lot of wood and make the bait more buoyant. If I hit a limb, I can kill the retrieve and let the bait’s buoyancy float it back off.”