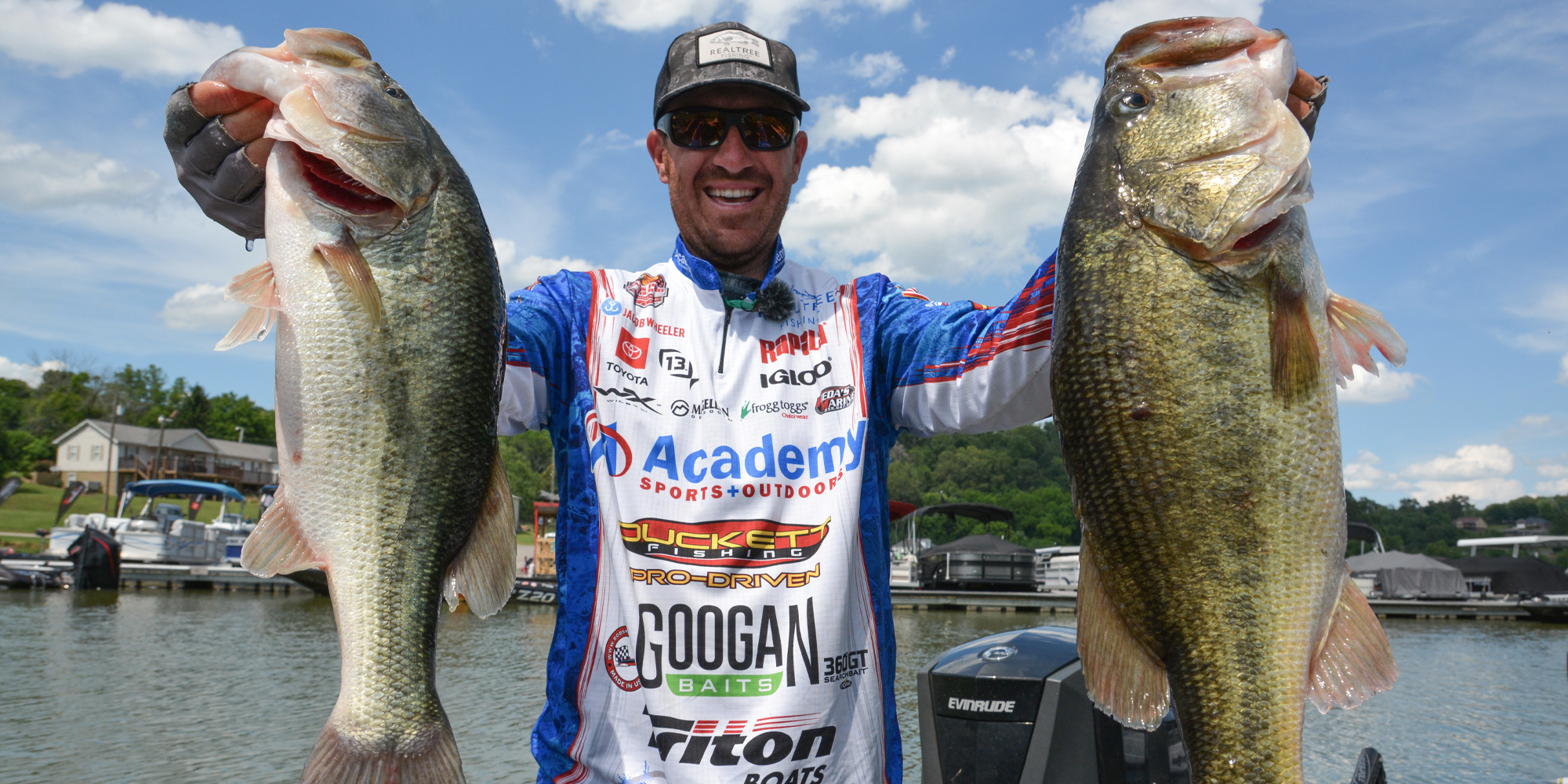 Tournament leader Jacob Wheeler has his sights set on another giant like the 10-pounder he caught on Day 3 on Lake Chickamauga. Photo by Joel Shangle

DAYTON, Tenn. – Through the first three days of the FLW Pro Circuit Super Tournament on Lake Chickamauga, the difference-maker between first and second places were big fish.

For Day 1 and Day 3 leader Jacob Wheeler, it was a 7 1/2-pounder on the first day, and a 10-pound monster on the third day. For second-day leader Jason Reyes, it was a 7-pounder early on Day 2.

Expect today’s final round of the first-ever mega event among both FLW and MLF pros to play out in similar fashion.

“It’s all about finding the bigs here,” Wheeler admitted before takeoff from Dayton Boat Dock on Championship Friday. “There are so many 4- and 5-pound fish in this lake, it’s not out of the question for all 10 of these guys fishing today to catch a 20-pound bag. My goal coming in this week was to catch at least 20 a day, but to win, a guy has to find at least one big bite.”

For Wheeler – who has stacked up days of 24-9, 22-1 and 25-12 – his biggest bite came on an offshore spot that he suspected would produce big fish. That 10-0 (the biggest fish the Tennessee pro has weighed in in his career) catapulted Wheeler past Reyes and Cole Floyd for a 4-13 cushion heading into the final day.

But it’s a lead that he’s not comfortable with.

“It would be so easy for somebody else to go catch another 10-pounder,” Wheeler said. “I really have to catch a big bag today, there’s no doubt about that.”

Reyes caught the biggest bag of the tournament on the second day with 27-2, starting the morning with a 7-pounder, and then grinding it out for the rest of the day dead-sticking a Yamamoto Senko. While the Reyes’ days haven’t produced fast and furious action, the quality of his bites have kept him in the Top 3 since the start.

“I’m not doing anything special or fancy,” Reyes told FLWFishing.com. “They come in spurts. I’ll have a 40-minute window where I’ll catch three or four, then I’ll go an hour without one. It took me a little bit to get dialed in. They want it so slow. I’ll throw a bait in there and just hold it and they’ll walk off with it. If I pump it, or shake it at all, they won’t bite it.