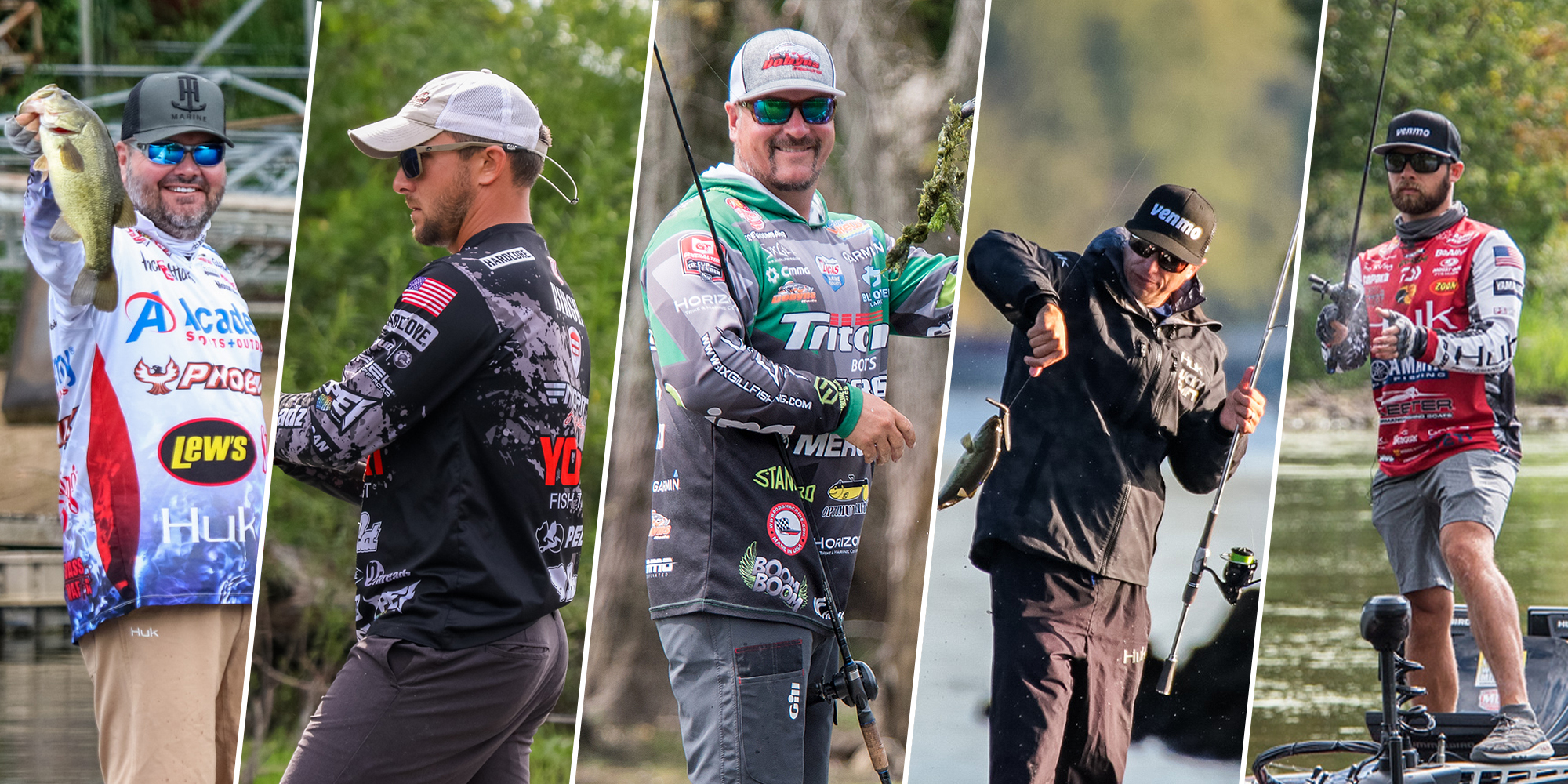 LA CROSSE, Wis. – The Championship Round field at REDCREST Presented by Venmo is set. Ten anglers will compete for the inaugural title, on an Upper Mississippi River fishery that has proven to be an excellent venue for the MLF “every scoreable bass counts” format.

Some anglers made it look easy during the second Knockout Round, cruising through the day thanks to excellent catches. For a handful of anglers, though, it was anything but easy. Like Friday’s Knockout Round, it was a dramatic finish that went down to the final moments on Pool 8 of the Upper Mississippi.

Greg Hackney, Zack Birge and Fred Roumbanis all started strong and were never in any real danger of falling out of the Top 5. The next five anglers in the standings continually swapped places and battled for the remaining two spots.

Tomorrow, the anglers will be forced to adapt again as the location will switch to Pool 7. Each angler was granted a four-hour ride around during their off day, but they were not able to make a cast. Whoever wins tomorrow will be the one who figures the bass out the fastest.

This week on the Upper Mississippi, most of the field was focused on a handful of techniques, but not many caught them as Hackney did. He relied on a Strike King 5XD, a deep-diving crankbait that will reach depths of 15 feet.

“Every morning the fish were getting on tops of these sand ledges pushing shad. I had a few deep holes that this was happening and that was my main pattern,” Hackney said.

When the action slowed with the crankbait, he also mixed in a Strike King Rage Cut R Worm.

This was a unique pattern and location, and Hackney doubts he’ll be able to replicate it on Pool 7, but he isn’t worried as he’s had success on the championship venue.

“I feel good about Pool 7, and I really like it, I rode around and looked at it yesterday, and it looks good,” said Hackney. “I think it’ll be more like we are used to on the Upper Mississippi with frogs, swim jigs, and squarebills being the dominant patterns.”

After getting his boat stuck during the Elimination Round, Birge had a penalty waiting for him when the day started.

“Today was good, despite that 15-minute penalty to start the day,” he said. “I went to my first spot, and they were biting. I was banking on that area, and it all worked out. I fished it hard until I felt like there weren’t any more fish around.”

“The bite started strong today, but I think the boat traffic finally got to my area,” he said. “I made a change and went to my prime frog spot, and the water was really low, so I started to focus on outside weedlines, almost like a low-tide situation.”

Brent Ehrler stayed in the mix of the things for much of the day and his 36 bass for 54-9 was more than enough for him to advance. He spent the day in the Black River area and did most of his damage with a small topwater bait and finesse worm.

As Palaniuk caught his last fish of the day, MLF NOW!’s Chad McKee stated: “The deal is sealed, Palaniuk has advanced to the Championship Round.”

Even at that point, Palaniuk didn’t feel relieved.

“It was intense, and I didn’t relax until the last five seconds, and I had a 4-pound lead,” Palaniuk admitted. “It was a great way to finish.”

Several catches in the closing moments separated him from Mark Rose and proved to be enough to advance.

Mark Rose spent much of his day near the I-90 bridge, the area that got him this far, but he ran out of fish. Late in the day, he made a gutsy move to another section of the river that required a long no-wake zone before he could resume fishing. It almost paid off as he found a new area with hungry bass. In the end, he fell one place short, just under 5 pounds behind Palaniuk.

For much of the day, Casey Ashley was hovering around fifth place, but he had a drought at the worst possible time. As Rose and Palaniuk continued to catch fish in the closing minutes, he fell to seventh with 27 fish for 42-06.

Knockout Round 2 daily awards were:

Competition continues on Sunday at 7 a.m. CT, with live, official scoring available via SCORETRACKER® on MajorLeagueFishing.com and the MLF app. The Berkley Postgame Show follows the action at approximately 4 p.m. CT.

Join us at the Onalaska Omni Center in Onalaska, WI, for the ultimate REDCREST experience for MLF fans! Fans are invited to the MLF Midway and Postgame Show Presented by Berkley.