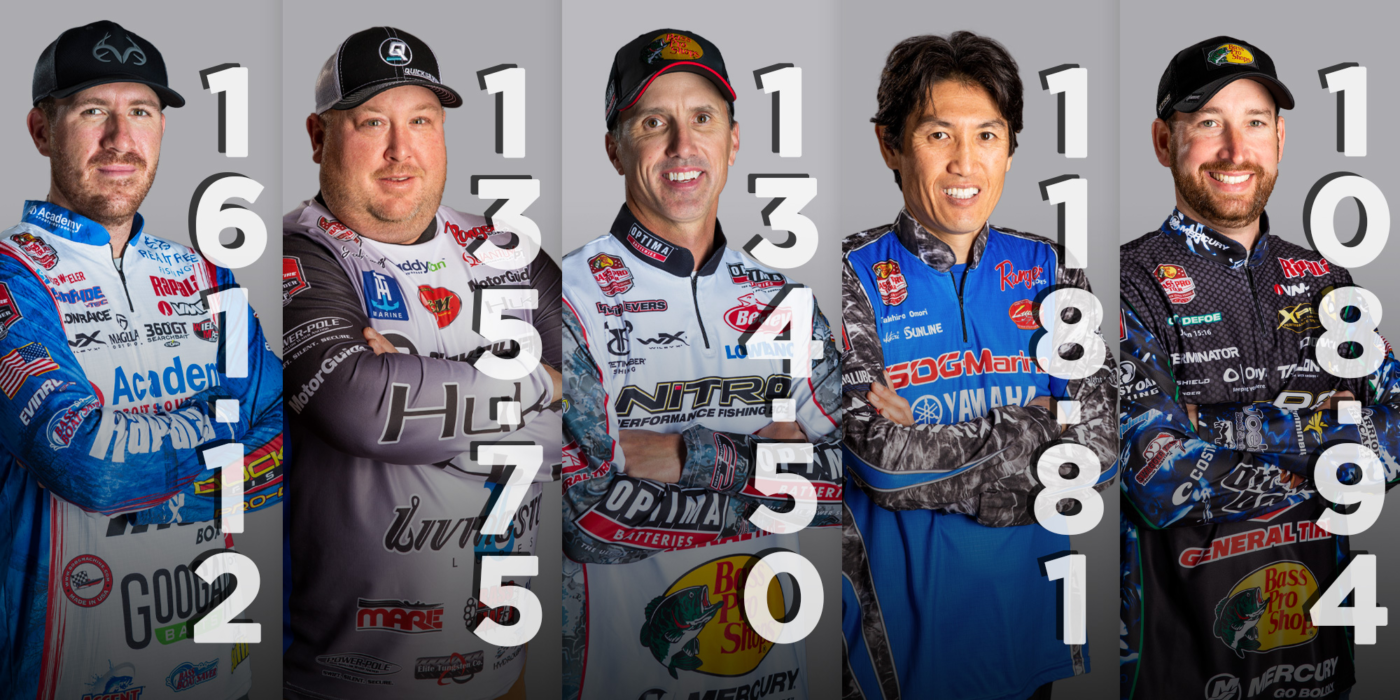 If ever there was a single day of competitive, tour-level bass fishing that qualified as “heavy,” it was the first Shotgun Round of the MLF Bass Pro Tour Stage Three on Jordan Lake near Raleigh, North Carolina.

Heading into the March 26-31 competition – which Jacob Powroznik won thanks to a 63-pound, 4-ounce day on Shearon Harris Reservoir – MLF NOW! analyst Marty Stone had touted the quality of the largemouth fisheries around Raleigh, predicting that the 80 MLF pros would achieve numbers previously unheard of in tour-level bass events.

And was Stone ever right.

On the first day of competition, the 40 anglers competing in the Group A Shotgun Round rang up an astounding 975 pounds, 15 ounces of scorable northern-strain largemouth. Perhaps more impressively: that near half-ton of bass was caught on a fishery that the majority of the field had never even seen before their abbreviated practice sessions two days prior.

“That was one of the best fishing days I’ve ever had,” said Mark Daniels, Jr., who put 12 fish on SCORETRACKER that day, to the tune of a whopping 52-1. “It got to a point where I was getting a little nervous every time I got a bite because I didn’t know how big it was.”

The Definition of “Heavy”

While the Bass Pro Tour record bass – Brett Hite’s 9-12 from Lake Toho – survived Stage Three, the overall number of big fish weighed in during six days of competition in Raleigh was impressive. Todd Faircloth’s 9-4 (caught during the first Shotgun Round) was the biggest fish of the week, and 57 6-pounders made their way onto SCORETRACKER during the event.

“The number of fish 6 pounds and over was pretty impressive, wasn’t it?” asked Powroznik, who put two 8-pounders on SCORETRACKER in a two-hour span in the Knockout Round on Falls Lake. “It just kinda goes to show you, you put this pack of lions on any lake where there are big ones, they’re going to catch them.”

Even though he finished second to Powroznik, Jacob Wheeler was the heaviest hitter in his four days of competition on Jordan, Falls and Shearon Harris lakes. The Tennessee pro piled up 55-7 in his combined Shotgun/Elimination rounds, backed that up with 46-1 in the Knockout Round, and finished the week with 59-10 on the final day.

His combined weight of 161-2 is the most recorded thus far on the Bass Pro Tour.

“I’ve had days from a numbers standpoint where I caught a good bunch of 2- and 3-pounders, but I can’t remember a day in my life where I could consistently catch 3- to 5-pounders all day long like we were able to do in Raleigh,” Wheeler said. “I’d hook a 4-pounder and say to myself ‘That was a little one.’ When can you say that a 4-pounder is a little one? Never! You look at those numbers and understand that what just happened in Raleigh was on a whole new level of ‘good’.”

Wheeler’s per-fish average for the event was a sturdy 3 ½ pounds.

Wheeler’s Favorite Fishing teammate and travel buddy Daniels fished his first Bass Pro Tour Championship Round, eventually weighing in 106-10 in four days. But as he hinted at above, the quality of the West Coast transplant’s catches on Day 1 of the competition was particularly impressive: Daniels averaged 4-5 on the day, and had a stretch where he caught four fish that averaged 5-12.

“It just got kinda comical,” Daniels joked. “I got toward the end of the day, and I just started giggling every time I hooked a fish because I just couldn’t believe how solid of a day I was having. It was just a simple case of seeing (a condition) that looked good and keep throwing (to it).”

Jordon’s Heavy-Hitter Day for the Books

Just how good was MLF veteran Kelly Jordon’s day in the Group A Shotgun Round on Jordan? Simply the best to date in Bass Pro Tour history.

Jordon powered his Skeeter/Yamaha over logs and through shin-deep water to reach a honey-hole on Jordan Lake that he exploited for 82-4, the heaviest single-day weight recorded in the Bass Pro Tour’s brief history. Jordon put 26 fish on SCORETRACKER, including seven fish 5 pounds or heavier, finishing the day with a 5-2 and a 5-6 in the final five minutes of competition.

But what’s even more astounding is the weight that the Texas pro could have achieved if he had batted 1.000 with his hook-to-land ratio.

“I should’ve been well over 100 pounds,” Jordon said matter-of-factly. “I hooked several more fish over 5 pounds and jumped off a couple that I know were giants. Don’t get me wrong, I had a truly awesome day of fishing, but it could’ve been even better.”

Jordon finished the event with 107-0, which is sixth for total weight, despite fishing only three of the four rounds.