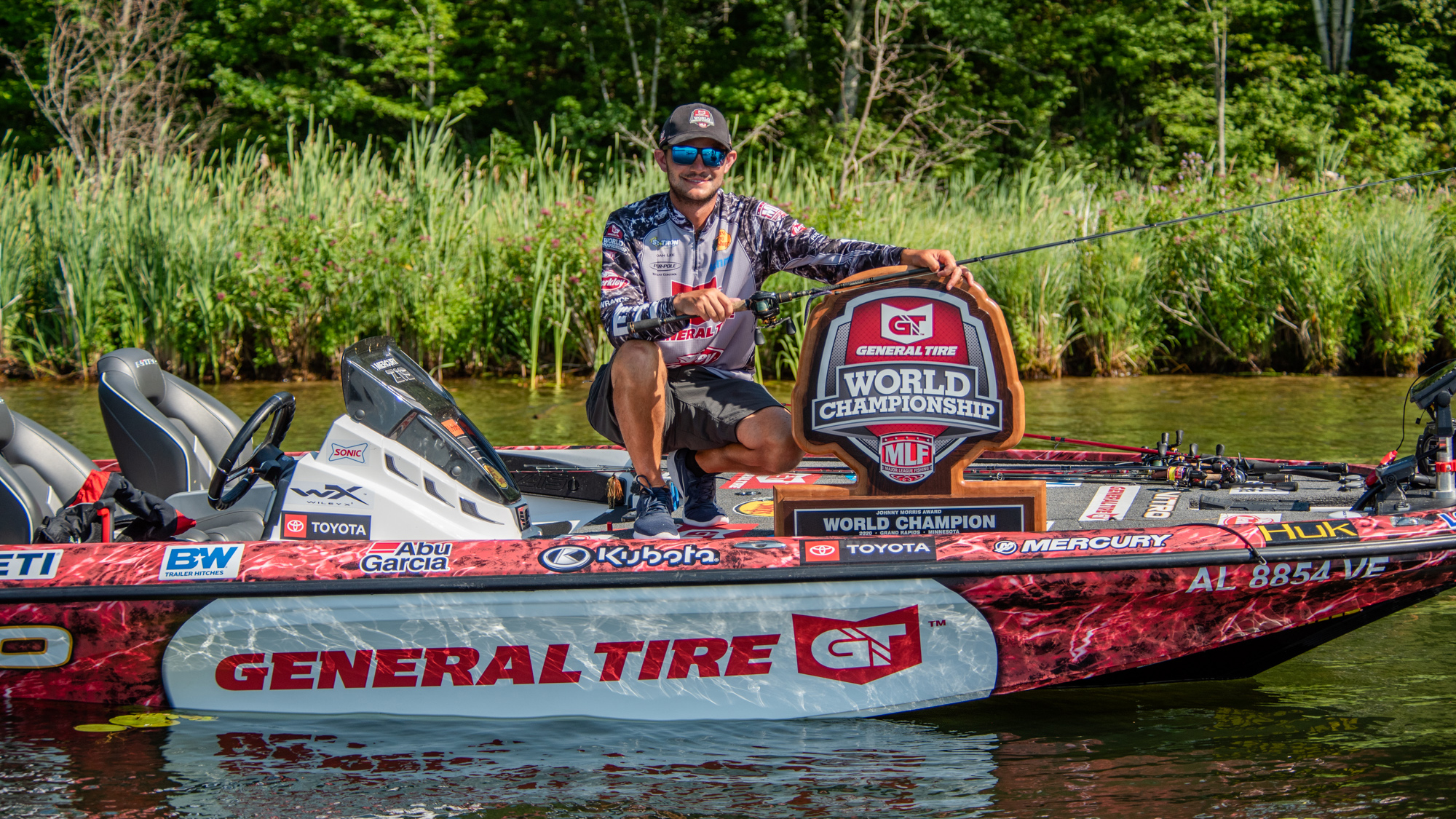 After an outstanding season on the Bass Pro Tour and 2020 Angler of the Year title, Jordan Lee added one more win to 2020: the General Tire World Championship Presented by Bass Pro Shops. Photo by Garrick Dixon

It was a nail-biting finale that came down to the wire in the final day Championship Round that aired Saturday on Discovery. Lee caught his last fish – a 2-pound, 2-ounce largemouth – with just 14 minutes to spare in the final period, overtaking Ashley, who had put together a frantic 17 bass third-period rally to move to the top of the leaderboard. Lee’s last fish came on a Berkley PowerBait MaxScent The General worm.

“Oh man, what a feeling,” said Lee, who was the 2020 Bass Pro Tour Angler of the Year, winner of the inaugural Heavy Hitters tournament in June, and now the 2020 General Tire World Champion. “Casey was just killing it right there at the end. It seemed like every time I caught one, he would catch two. It was gut-wrenching. I was listening to him bumping up the SCORETRACKER® and he just kept coming and I couldn’t do anything about it. I just had to keep my head down and focus on every single bite. That last fish turned out to be the difference maker. We fished all day long and I won by less than a pound. Unreal.”

Lee started out his day on Spider Lake targeting largemouth with a vibrating jig and a swim jig, before mixing in a frog and eventually the Berkley The General worm (black and black-and-blue) as the day progressed. He keyed on the shallow reeds and lily pads on the 1,392-acre lake.

“It was mostly a fun day of flipping and frogging, and that’s what I love to do,” Lee said. “I mixed up a couple of different baits to start with, but the swim jig really got me started. It clued me in that the fish were around the reeds and the pads, and then I started catching some good ones.”

Lee led after Period 1 of competition and had a near 20-pound lead into Period 2 before his bite slowed in Period 3. Meanwhile, Ashley’s pattern caught fire. Ashley took the lead with 40 minutes remaining in the event, and the two anglers battled back and forth before Lee’s last-minute heroics clinched the victory.

“We were so close, I pretty much knew that whoever caught the last scorable bass was going to win,” said Lee. “As the clock ticked down, I kept expecting my boat official to tell me that Casey had caught one at the very end to take it, but luckily for me that didn’t happen.

“To win this event is just the best feeling in the world,” Lee went on to say. “MLF puts us out in the middle of nowhere – down dirt roads, places we’ve never fished before. I love that part of this game. It’s a level playing field, and to come away with a win against this bunch of guys – they’re the best in the world. This has been a special, special week. Nothing comes easy in this sport and I don’t take it for granted. I’ve had a great year. I’m fishing with confidence and I hope I can keep the good vibes going next season.”

Complete results and photos from the event can be found at MajorLeagueFishing.com.

Meyer caught the Berkley Big Bass of the day – a 5-pound, 2-ounce largemouth at the end of Period 1 that came on an unnamed finesse worm.

Overall, there were 159 bass weighing 297 pounds, 5 ounces caught by the final six pros during the Championship Round of competition on Spider Lake.

The 2020 General Tire World Championship Presented by Bass Pro Shops was hosted by Visit Grand Rapids and premiered on the Discovery Channel as six, two-hour original episodes debuting on October 10, 2020, and running through November 14, 2020. The event, shot over six days in Grand Rapids, Minnesota, showcased 16 MLF pro anglers culminating the 2020 Cup season and competing for the top prize of $100,000.