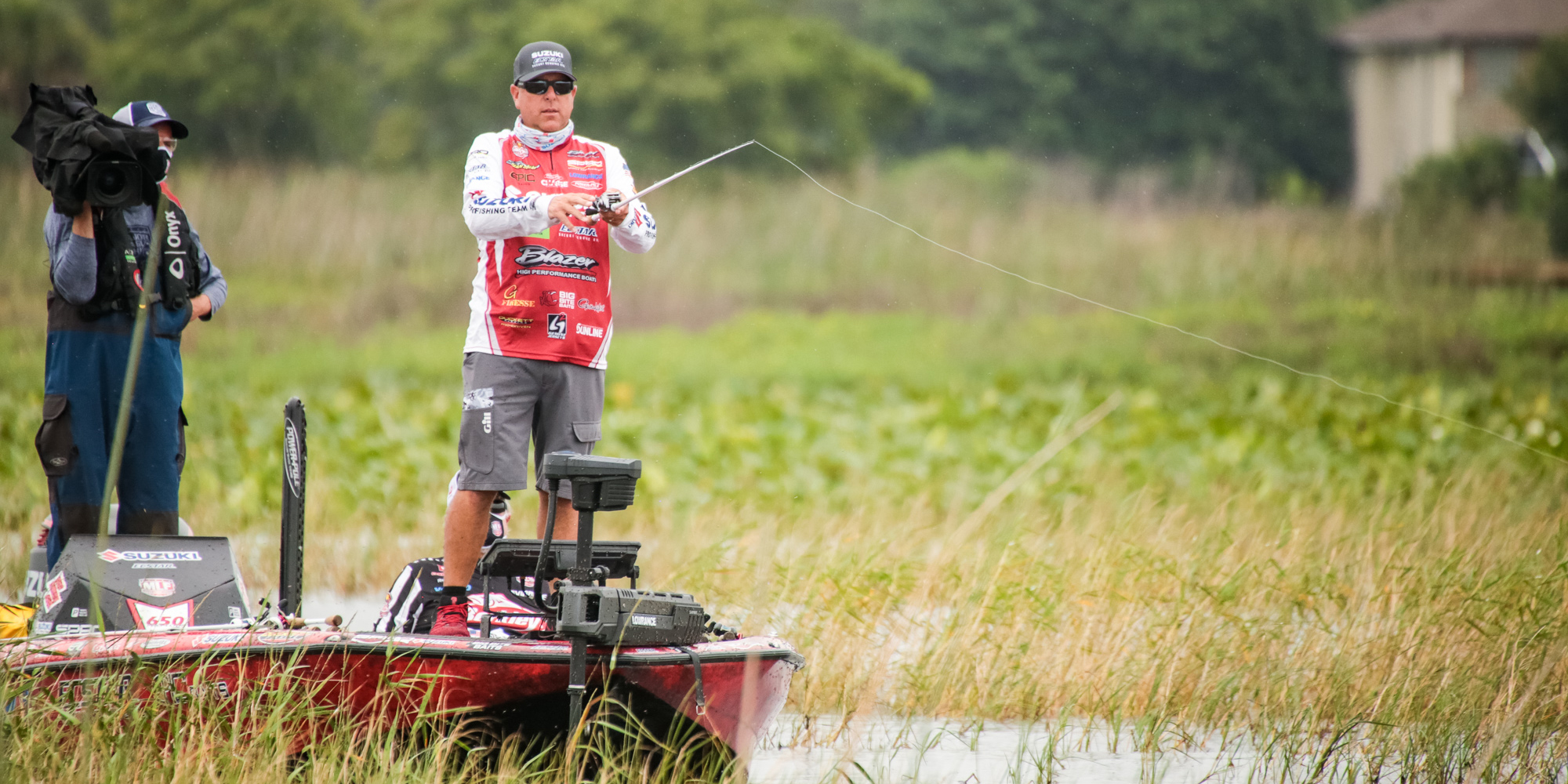 The pro bass world knows Dean Rojas as the “dean of frog fishing,” and the California-raised angler who now lives on Arizona’s Lake Havasu has proven time and time again that he is worthy of the title.

My first chance to watch Rojas work his froggin’ magic came during spring high-water on Georgia’s Lake Lanier. He tied on a prototype of the Bronzeye Shad, a frog-style bait he had designed with a walking presentation in mind.

The first bay we entered was lined with freshly flooded wood, dead and alive. A shaded clay point with a bare flooded bush caught his eye. He dropped the Bronzeye Shad on target. Two twitches later, a hefty largemouth exploded on the bait and came to boat.

So where’s his favorite place to fish a frog? What mix of elements comprised the perfect blend of cover, conditions and habitat? Would he find them in a flooded reservoir arm in spring? Mixed beds of milfoil and hydrilla on a TVA reservoir? A Mississippi River backwater area filled with deadfall, lily pads, duckweed, overhanging tree limbs, and floating debris?

“The best place to throw a frog will vary with the particular angler,” Rojas says. “Some guys like to throw frogs over huge mats of grass. But I know what I like. I’m more of a target fisherman. I’m looking for ambush points no matter the habitat – whether it’s wild rice fields, hydrilla, grass mats, lily pads…whatever it might be.”

Rojas envied the field at the Bass Pro Tour’s season-ending REDCREST championship in 2019 on the Mississippi River near LaCrosse, Wisconsin, which many expected to be a wild frog-fishing festival. Low water conditions marginalized the effectiveness of hollow-body frogs. But the diverse mix of habitat, cover and current in the Mississippi River backwaters made for interesting speculation.

“I really like to fish targets on a river system like the Mississippi,” he said. “I pay particular attention to the current breaks, things that cause the water to do something different from the normal river flow.”

The prospect of catching smallmouth on faux frogs added another wrinkle.

“Smallmouth can set up in eddies and points brushed by current from the main river,” said Rojas, who had bronzebacks in mind when he designed the Bronzeye Spit Shad for SPRO. “And they really like that popping frog. I’ve caught more smallmouth on the Spit Shad than all the other types of frogs combined.”

Debris deposited by wind and wave action or current is a favorite target.

“Floating grass gets balled up, creating a canopy, and that is usually where bass are sitting,” says Rojas. “The frog is perfect for that. And if you can find an area where grass is pushed to duck weed and the fish have access to deep water, it’s perfect for a Bronzeye Frog.”

Thick beds of hydrilla and milfoil create prime froggin’ acreage on many bodies of water. As the season progresses and vegetation dies, cheesy cavities in the vegetation create targets within otherwise featureless expanses.

Rojas concedes that not all the pros adhere to his “target” approach to frogging, and he emphasizes that the smart angler will adapt to whatever conditions he finds. Ish Monroe fished duck weed expanses on his way to his 2018 Bassmaster Elite win on the Mississippi River. He adopted a strategy quite different than Rojas’ “target” approach.

“Ish fished duck weed that was nearly matted across whole coves,” recalls Rojas. “Some of those bass were 10 or 15 or more feet off the bank. So if you ask ‘What’s my favorite spot to fish a frog?’