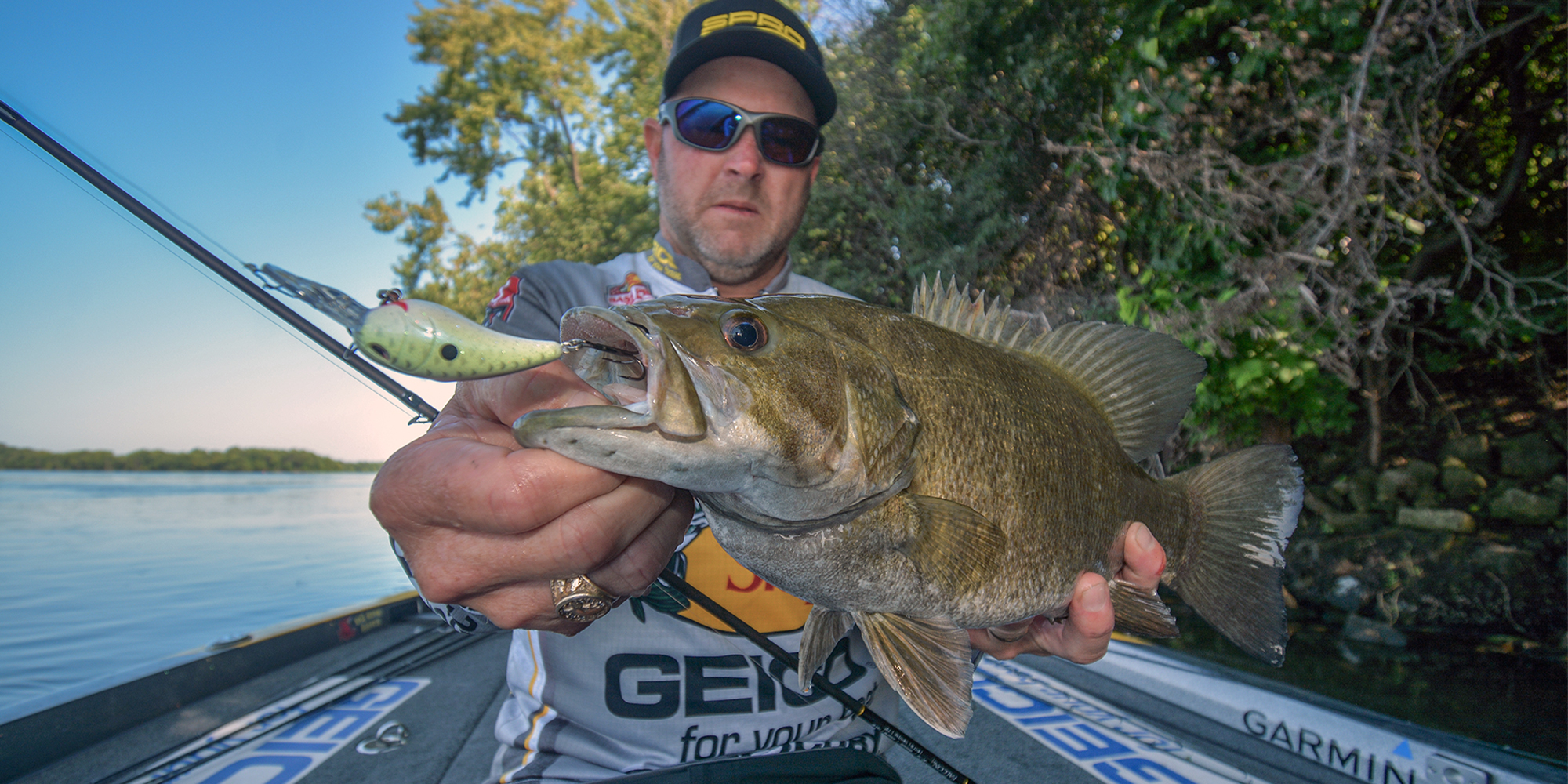 Whether they be smallmouth, spotted bass or largemouth, Mike McClelland says that late fall is a key time to catch fish with a crankbait. Photo by Joel Shangle

It’s a technique and a season that MLF pro Mike McClelland looks forward to every year: throwing crankbaits in the late fall and early winter. McClelland can’t help himself, really: the SPRO pro grew up (and still resides in) the crankbait-crazy Ozark Mountains region of southern Missouri/northern Arkansas, and would gladly throw a wiggler 12 months a year.

His 31-year professional career supports his fondness for cranking, too: McClelland’s list of 63 tour-level Top 20s is peppered with results where a crankbait was a key pattern, and some form of cranking bite played into “roughly half” of McClelland’s eight major professional wins.

And this time of year, when he’s simply fishing for fun or picking up the occasional local wildcat tournament near his home in Blue Eye, Missouri, McClelland has at least two cranking rods on deck at all times.

“Year after year, I can look back at days when I’ve had really good success fishing a crankbait all the way through winter,” McClelland admits. “It’s just a bait that I can imitate any food source with and it allows me to cover a ton of water during one of the major periods of transition of the year.”

Water temperatures around McClelland’s home took a quick dip in mid-November, which signifies to him that the shad-centric crankbait bite of early fall will fade quickly toward a more crawdad-heavy late fall pattern.

“Once I stop visibly seeing fish chase shad, I really focus primarily on a craw-colored crank,” McClelland says. “Here in the Ozarks, we’ve had a quicker progression of fall than usual – water is already in the high 40s and low 50s. There are still those occasional days where the sun is up and shad get active, and you can catch ‘em on a shad-style bait, but now as we stop seeing active shad, it’s time to focus on baits that look like a craw.”

Noting that 16 of the 18 patterns of the SPRO RkCrawler 55 crankbait – one of his fall go-tos – are variations of a craw color, McClelland says that he’s currently throwing Phantom Brown and Phantom Green, and will narrow his colors even more the later he fishes in the fall and early winter.

“The exact color you fish is a process of elimination,” he says. “Anytime you see a craw that a fish has regurgitated, pay close attention to what color is predominant. The colder the water gets, I tend to veer a little more toward patterns that are more pale like Molting Craw and Green Craw. Craw will get a little more ‘creamy’ appearance as the water gets colder, so paler colors tend to match the hatch better.”

Whereas early fall provides visible cues about where to fish (shad on the surface), late fall requires more attention to electronics. McClelland typically bypasses the main lake and starts his search in creeks with springs, preferring creeks that face south (“You don’t want a creek that catches a cold north wind all the time,” he advises), leaning heavily on his Garmin mapping software to locate steep contours that run into channel turns, and then allowing his SideVu and ClearVu to tell him whether to fish a spot, or move on.

“In these particular months of the year, I still try to go all the way to the back of the creek, to where I have that last deep-water channel swing as a good starting point,” McClelland says. “Start at the back and work our way out, unless you’re familiar enough that you just know where they set up. Look for bait. If you go into a creek, idle around and don’t see any bait, it’s probably a good idea to move on to the next creek.”

Connecting on the “Lift”

As the name of McClelland’s RkCrawler indicates, he prefers his crankbaits to dig, grind and crawl on the bottom on the retrieve, which naturally imitates the bottom-hugging movement of a crawfish. But the Missouri pro is also attentive to a tiny little window at the end retrieve, where he first begins to pull the bait out of its intended dive-to depth to wind it back to the boat.

McClelland refers to this split second as “the lift” and swears that it can be a key to instigating bites.

“I see this in these Ozarks lakes a lot, where fish tend to be super-aggressive toward a bait right when it first lifts off the bottom,” McClelland advises. “Maybe it’s just an instinct for them to bite because it’s a different action – I think those fish sometimes track the bait, and when it finally breaks free of the bottom and starts to lift, that’s a good opportunity for them to eat it.”

With this in mind, McClelland will frequently position his Ranger in 2 to 4 feet of water deeper than his bait’s primary diving depth, so he has a “lift” zone at the end of every retrieve.

“If I’m throwing a RkCrawler 50 with a depth that maxes out around 8 to 9 feet, I’ll set the boat in 10 to 12 feet of water so that bait lifts just off the ends of those breaks,” McClelland says. “You can literally see fish sitting just off those breaks sometimes. Once you start looking at fish with Panoptix LiveScope and determining what depth those fish are hanging at off the break, you can run that pattern really well this time of year.”