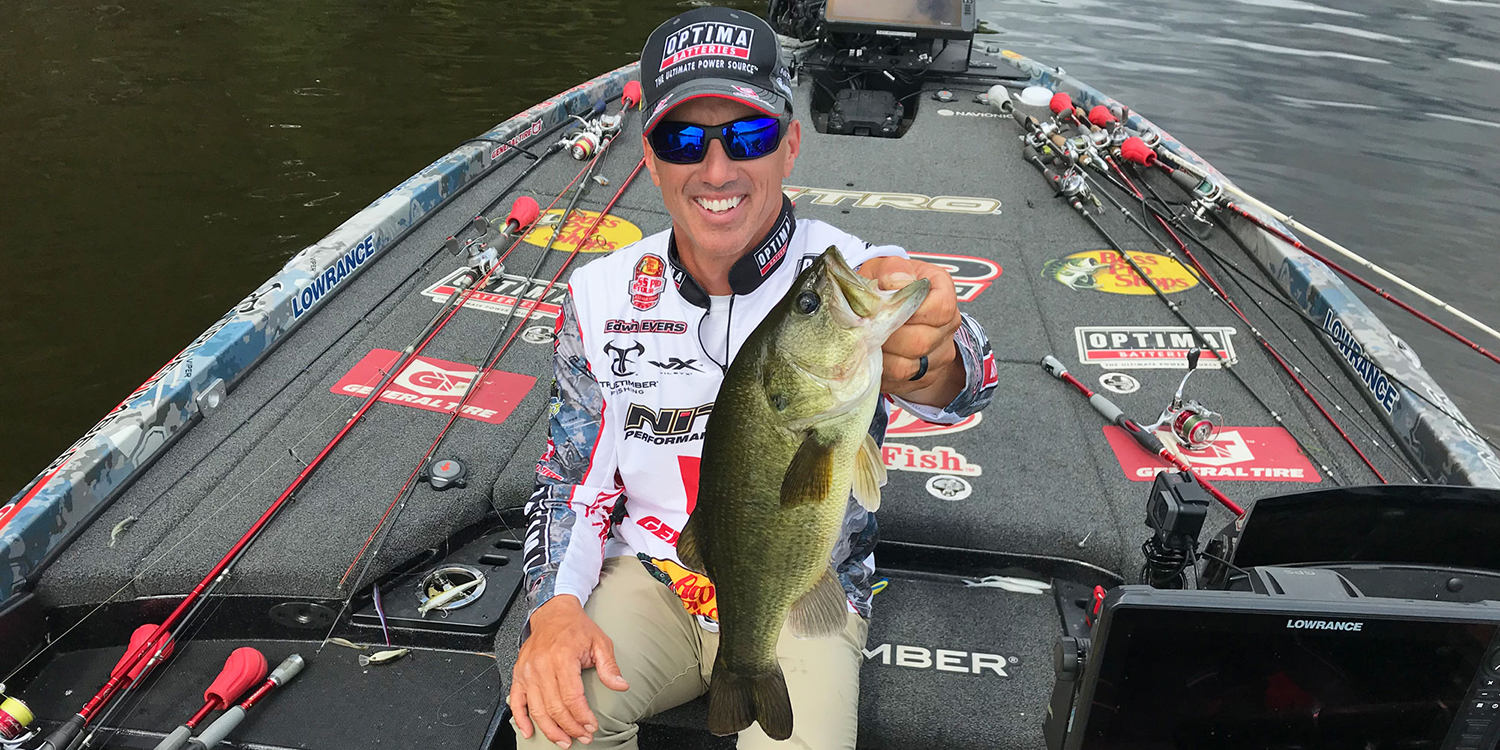 Edwin Evers is safely inside the Top 20 as time winds down on Pool 8.

LA CROSSE, Wi. – If there’s anything predictable about an Elimination Round in the MLF competition format, it’s that NOTHING is predictable. As we approach the end of the day, we’ve seen some things that most of us probably didn’t count on when we arrived to the fog-shrouded Upper Mississippi River this morning. See below!

You can follow live, official scoring on SCORETRACKER® for the rest of the day. The MLF NOW! live stream with Chad McKee, Marty Stone, JT Kenney and Natalie Dillon will call the action until lines out, followed by the Berkley Postgame Show at 4 p.m. CDT.
–Joel Shangle

3:00 p.m. CT – It is official, we have our 20 anglers that will be moving on to the two Knockout Rounds. Seeding has yet to be determined, but we do know the pros:

2:44 p.m. CT – Zack Birge is still stuck on that sandbar and he will not be able to serve his 15-minute penalty until his boat comes free. It was discussed that Birge would move on to a MLF relief boat and then immediately serve his penalty. That will not be the case as MLF officials have told Birge that the clock will not start on his penalty until his boat is loose. That means that Oklahoma pro will begin his Knockout Round in the penalty box.
-Mason Prince

2:08 p.m. CT – Zack Birge is stuck and the reinforcements are coming. Birge got his boat caught on a sandbar and according to MLF NOW! analyst Marty Stone, MLF is sending two boats with straps to try and get him out of the shallow water. Unfortunately for Birge, both Stone and JT Kenney are not sure that it will be enough. Both said that they think a fan boat is needed to get Birge free. The Oklahoma pro left his boat and tried to get assistance from his MLF official, so it is likely he will serve a 15-minute penalty once he is able to get his boat free. Good news, Birge remains in the lead.

1:50 p.m. CT – MLF photographer Jesse Schultz has watched Greg Hackney take a totally different approach for brief moments today, adding in a bait that hasn’t been mentioned in two days on the Upper Mississippi: a deep-diving crankbait. Hackney has added 41-4 to SCORETRACKER® today, some of it targeting sandbars with deeper “dugout” spots. The water is around 20 feet deep in the creek Hackney has been fishing, but with sandbars running out into the creek, basically creating a ledge. Hackney has been flipping shallow, but occasionally pulls up on a sandbar and makes a few casts with a deep-diving crank. So far so good on that: his last two casts with the crankbait added a 2-14 and a 2-5.
-Joel Shangle & Jesse Schultz

1:26 p.m. CT – Jeff Sprague is now in 20th place and on the Elimination Line, but it may not be time for him to panic just yet. After starting the day in ninth place, Sprague has continued to fall down SCORETRACKER® all day. However, he is ahead of Dustin Connell by more than 13 pounds with about an hour and a half remaining in the round. Sprague may have spent most of his day practicing, but it may be time to catch a couple of more scoreable bass to put Connell out of reach.
-Mason Prince

12:45 p.m. CT – Into Period 3 we go and Randall Tharp is the man on the Elimination Line. Tharp is 11 pounds ahead of Dustin Connell who is in 21st place. Andy Montgomery needs 12-14 to catch Tharp while Cody Meyer is 19-9 behind. Anything can happen as time winds down on the Mississippi River.
-Mason Prince

11:50 a.m. CT – There are some big names who seem to be in practice mode as we get closer to Period 3. Mike Iaconelli, Fred Roumbanis, Brent Ehrler and Jeff Sprague all have fallen on SCORETRACKER® due to lack of production, but their may be a method to their madness. All of those pros finished inside the top 10 yesterday and we know for a fact that Ike and Roumbanis both spent the end of their Shotgun Rounds practicing. Brandon Palaniuk is another angler who might have been comfortable enough with his positioning heading into the Elimination Round because he is now in 15th place.
-Mason Prince

11:13 a.m. CT – Something we are not used to seeing, Jacob Wheeler is now on the Elimination Line. The Stage Seven champion is in 20th place and is 11-11 ahead of 21st-place Wesley Strader. Wheeler hasn’t had to experience much Elimination Line drama lately so we will see how responds.
-Mason Prince

11:00 a.m. CT – Greg Hackney is having a quietly productive day as he sits in seventh place. With 30 pounds today, his total is now 69 pounds, 11 ounces, putting him almost 22 pounds ahead of the Elimination Line. The 2018 General Tire World Champion has had a crankbait in his hand for most of the morning which has proved to be the right choice.
-Mason Prince

10:10 a.m. CT – Randall Tharp began his day in 18th place and needing to have another solid day to secure his spot in the next round. The Honey Badger is off and running this morning with 21-8, pushing him up three spots to 15th place. It looks like Tharp may be relying on a swim jig to get his bites today, at least his last seven. Tharp has pulled in a good amount of 2-pounders today, five in total. The Florida pro is hoping quality will outweigh quantity on the Upper Mississippi.
-Mason Prince

10:00 a.m. CT – Whatever Mark Rose is cooking, I’m sure the rest of the field would like a taste. The Arkansas pro has continued a steady climb up SCORETRACKER®, and currently sits in third place with 41-2 on the day. The longest Rose has been without a scoreable bass was the 15-minute break between Periods 1 and 2: he’s averaging a scoreable fish every 5.6 minutes.

On the other end of the spectrum, it’s probably time for the for the bottom half of the bottom 10 to get worried: from 25th place down, the gap above them to the Elimination Line is 21 pounds or more.
-Joel Shangle

9:33 a.m. CT – At the end of Period 1, Casey Ashley is holding on to the final spot in the Top 20 at 50-9. Wesley Strader trails Ashley by 3-14, while Cody Meyer needs 9-13 to work his way above the Elimination Line. Chad McKee just mentioned on MLF NOW! that there has only been one angler to move from outside of the Top 20 to inside, and that is Mark Rose. He started the day in 22nd place and he just ended the first period in fourth. Not a bad start to a birthday for Mark Rose.
-Mason Prince

9:08 a.m. CT – Andy Morgan had a rough start to the morning, with only one bass for nearly two hours. We watched the Tennessee pro methodically fish a grass line with a flipping stick, and then switch up to a spinning rod and immediately catch two scoreable bass. Morgan has added two more quick ones after that, including a 3-9 to boost him back up to fifth.
-Tyler Brinks

8:58 a.m. CT – Zack Birge has now cracked the 100-pound threshold. The Oklahoma pro just reeled in his 61st bass of REDCREST and it weighed in at 3-3, pushing his two-day total to 102-14. Birge was the first angler in Bass Pro Tour history to break the 100-pound mark with a two-day weight total back on Table Rock Lake in Branson, Missouri. His lead over Stephen Browning is now 29-12.
-Mason Prince

8:45 a.m. CT – There’s a little space between the Elimination Line and 21st place. Jacob Powroznik owns the final spot as of right now with 48-14. Wesley Strader is the first man out currently with 42 pounds, 6-14 behind Powroznik. Cody Meyer is 11 pounds behind Powroznik in 22nd place.

8:01 a.m CDT – Brent Ehrler is working a topwater bait along bank mixed with docks and trees, working it fast with quick twitches. He just missed one and made three more casts to the same spot before getting another bite. Ehrler had a solid day yesterday, and each catch brings him closer to fishing another day.
–Tyler Brinks

7:55 a.m. CDT – A couple of names jump out at you as they make their ascension up SCORETRACKER this morning: Greg Hackney, who already has 13-4 on the morning and is currently in 11th place; Mark Rose, who has added a whopping 15-3 already in the first hour to climb above the Elimination Line into 17th.
-Joel Shangle

7:40 a.m. CDT – Cody Meyer is slowly fishing up and down a point in the Black River, picking apart every piece of cover and alternating between a baitcaster and a spinning reel. So far he has two scoreable bass. Meyer was right around the Elimination Line at the end of competition yesterday and needs a good day to advance into the Knockout Rounds.
-Tyler Brinks

7:20 a.m. CDT – Mark Rose and Andy Montgomery are fishing near the I-90 bridge on the Black River, but on opposite sides. Montgomery is working the pilings with a moving bait (can’t identify it yet) as he weaves around the bridge. Rose is out further from the bank, fishing slower, and catching them.
-Tyler Brinks

7:17 a.m. CDT – Heavy patches of fog running downriver this morning. That doesn’t seem to be slowing Michael Neal down at all: the Tennessee pro already has five fish for the morning for 7-5. MLF photographer Garrick Dixon started the morning shooting on Neal’s boat, we’ll see the action up close when Dixon jumps off and uploads.
-Joel Shangle

6:35 a.m. CDT – Interesting to see which anglers headed in which direction out of the Veteran’s Freedom Park launch this morning. Andy Morgan – who comes into the morning in sixth place with 52 pounds, 9 ounces – ran the farthest upriver to Onalaska. Day 1 leader Zack Birge hightailed it straight downriver, back toward the honey hole that produced over 82 pounds for the Oklahoma pro in yesterday’s Shotgun Round.
–Joel Shangle

Ask the Anglers: Which MLF Pro is the Best Chef?