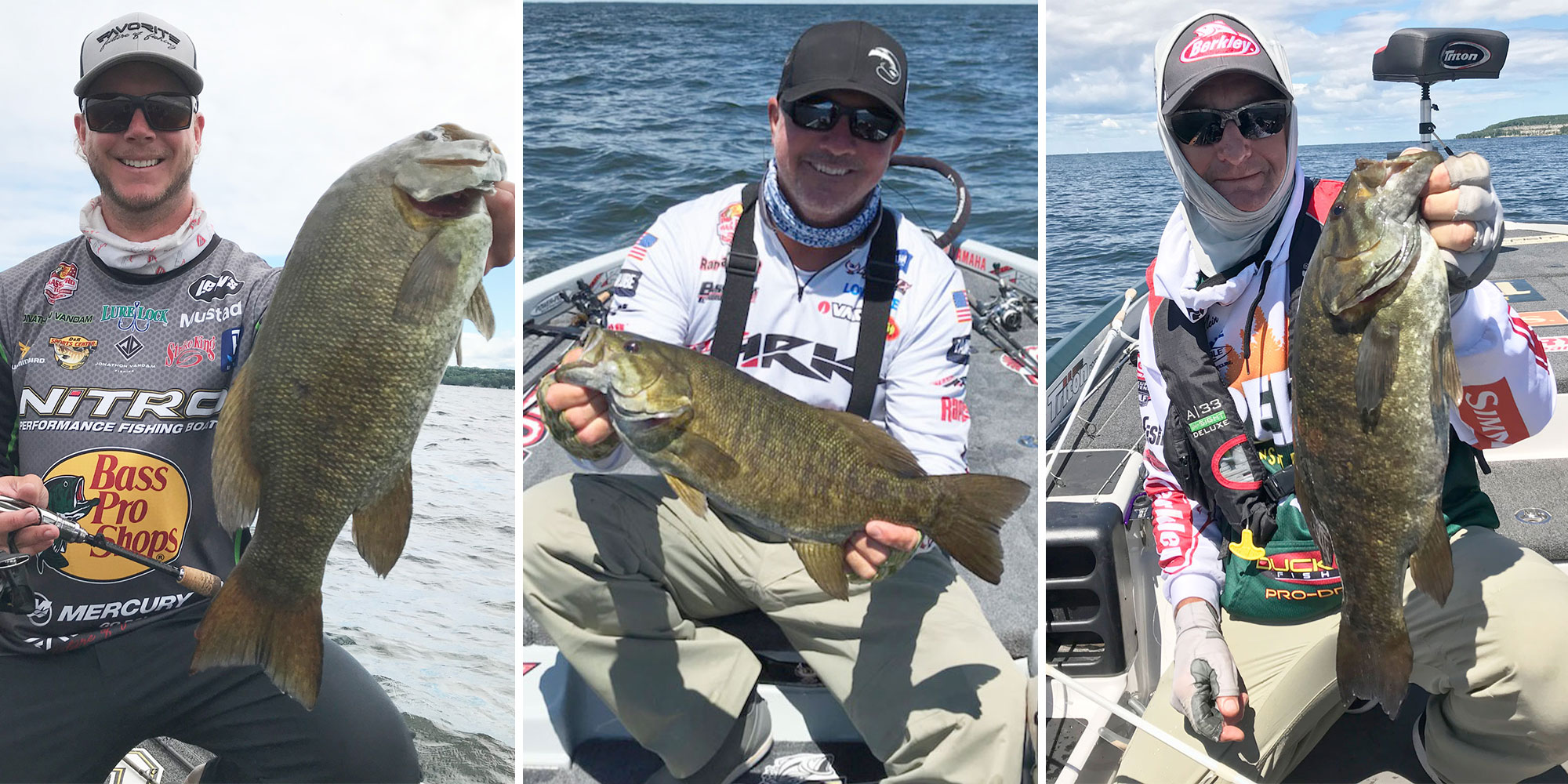 The bite is heating up in the final period of Qualifying Day 3.

STURGEON BAY, Wis. – After two days of heavyweight smallmouth-catching action and multiple MLF records at the Covercraft Stage Five Presented by Abu Garcia, Justin Lucas, Josh Bertrand and Scott Suggs have just started their three-way battle for the top spot (and automatic advancement to the Championship Round) in Group A competition.

That trio of Berkley pros put an astounding 384 pounds of smallmouth on SCORETRACKER® on Day 1, and are far and away the frontrunners in the battle for Sunday’s top spot. But Lake Michigan smallmouth being the nomads that they are, the question of the day is: Will Justin Lucas’ mega-school still be there today?

Lines are in and the first smallies of the day have arrived on SCORETRACKER®. We’ll be following the action here on the live blog all day.

3:38 p.m. CT — Casey Ashley just landed a 4-2 to push himself into the Top 20 ahead of Gary Klein, John Murray and Aaron Martens. Ashley is less than one scorable bass ahead of Murray and Klein while Martens will need to make up nearly 7 pounds.

3:33 p.m. CT — Justin Lucas wanted to crack 200 pounds, and he just did it. Lucas just added a 2-5 smallmouth to push his two-day weight total to 201-6. He is the only angler in MLF history to ever hit that mark. He will now waltz into Wednesday’s Championship Round for the second straight event.

2:46 p.m. CT — Justin Atkins added a couple of scorable bass to move above the Elimination Line and into 18th place. Those were the first two bass for Atkins today.

In the Points Championship race, Fletcher Shryock has now dropped to 30th place and is making another move. He will need to make the Knockout Round if he wants a chance at taking down Jordan Lee.

1:16 p.m. CT — Jeff Sprague and Fred Roumbanis both went on an impressive run to end Period 2. Boom Boom has now moved into the Top 20 while Sprague has gone from 30th place to 24th. One more period to go for Group A on Sturgeon Bay and it looks like a place in the Top 20 is going to come down to the wire.

12:52 p.m. CT — Jacob Wheeler is showing why he is one of the best anglers in the world. He has moved from 34th place to 17th in the second period due to 40-2 of bass. Wheeler is third in the points standings behind Jordan Lee and Fletcher Shryock. Shryock continues to struggle, as he is now down below the Elimination Line in 25th place.

12:10 p.m. CT — Rojas has now fallen out of the Top 20 and is 2-4 behind Jesse Wiggins for the final spot. Justin Atkins caught 64-8 on Day 1 but has yet to catch a scorable bass today. While he may have spent the first few hours of his day practicing, it might be time for Atkins to put some bass into the boat.

11:55 a.m. CT — David Dudley is now into the Top 10 thanks to more than 70 pounds of fish caught today. It looks like Dudley has been working with a soft plastic bait, no word yet if it’s a drop-shot or a Ned rig.

10:57 a.m. CT — Mark Davis has now moved into the Top 20 thanks to more than 28 pounds of bass today. Davis began the day in 31st place and he began the event in 34th place in the REDCREST qualification standings.

9:56 a.m. CT — David Dudley started his day in 37th place after only catching three scorable bass on his first day of competition. Today, he has shot up SCORETRACKER® with 11 bass for 32-8 and is now up to 21st place and only 1 ounce behind 20th-place Fletcher Shryock.

Upon hearing he was in 20th place, Shryock has decided it’s time to move and take advantage of the trailering policy. He just called his longtime girlfriend, Rose, to come pick him up and drive the boat to another area.

9:37 a.m. CT — Justin Lucas has now set another MLF record–highest two-day weight total–with 161 pounds, 14 ounces. Lucas is now over 32 pounds ahead of Scott Suggs for the lead in Group A. A win for Lucas would mean a second-straight trip to the Championship Round.

9:20 a.m. CT — John Murray has made a big move this morning. The Tennessee pro has 12 bass for 35-2 in less than an hour and a half. He has moved from 34th place to 14th in Period 1 and it looks like a drop-shot/crankbait combination is the difference maker for him.

8:46 a.m. CT — Justin Lucas has stayed consistent to start his morning. After catching 141-9 of bass on his first day, he’s added 11-2 to begin Day 2. He has the third-most bass today behind Takahiro Omori and John Murray.

8:21 a.m. CT — Something to keep an eye on as the day develops: with Jordan Lee’s strong showing yesterday, it is imperative that Fletcher Shryock and Jacob Wheeler make the Knockout Round if they want to continue to challenge Lee for the Points Championship. Lee finished in third place yesterday and looks like he will comfortably make at least the Knockout Round. Shryock started the day in 17th place while Wheeler began in 27th in Group A.

Ask the Anglers Presented by Champion: Whose Boat Would You “Borrow” Tackle From?