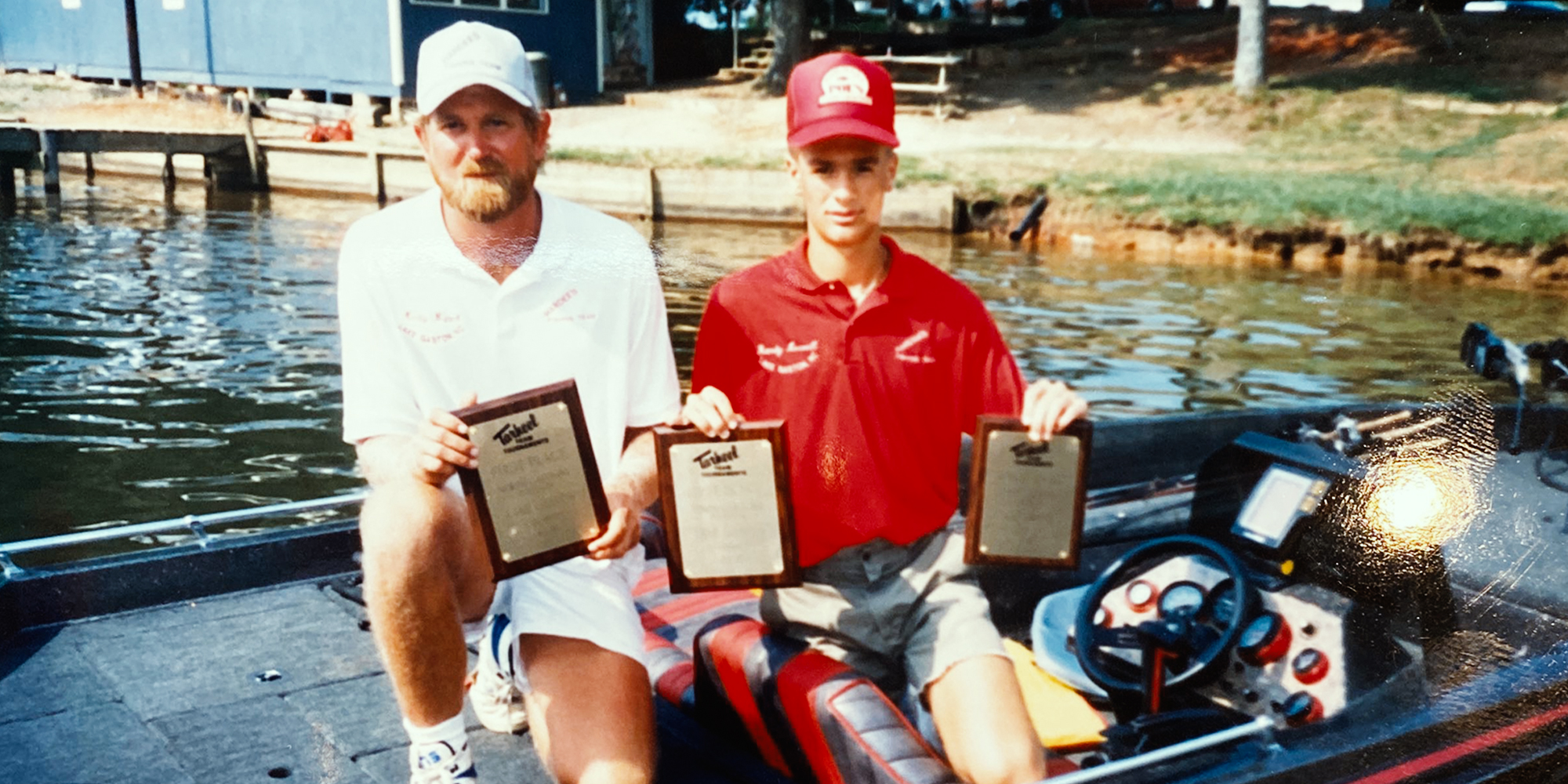 Randy Howell shares the story of a serious health issue that nearly took his life at 18 years old and how it taught him to choose faith over fear in everything he does. Photo Courtesy of Randy Howell

In the fall of 1992, 18-year-old North Carolina angler Randy Howell catapulted onto the professional fishing scene with no idea that his luck – and his health – were about to drastically change.

Howell had fished his entire life, helping his parents run a marina and leading fishing excursions on Lake Gaston, North Carolina as a guide from a very young age.

While seemingly on a fast track to pro status, Howell suddenly found himself lying in a hospital bed surrounded by intimidating tubes and whirring machines, afraid of dying.

Howell was the youngest angler to have qualified for the Top 100 after fishing the first year of the B.A.S.S. Invitationals. He earned his tour card to start the pro circuit in May of 1993 and was well on his way to achieving his dream of being a pro angler.

But in an instant, his whole world shifted.

“After spending a day out on the water in the middle of a tournament I began throwing up blood and knew something wasn’t right,” Howell said. “I was about eight hours from home and knew I needed to get back and figure out what was wrong.”

Howell slowly made the drive toward home, stopping at gas stations and getting sick the entire way, before finally making it to a hospital in Rocky Mount, North Carolina, just in the nick of time.

Once admitted, doctors informed Howell that his colon had ruptured and he was within hours of developing Peritonitis, a deadly bacterial infection which could have resulted in his untimely death.

“I woke up in intensive care, nurses pulling bandages off of me, with part of my intestine sticking out of my body,” Howell reminisced. “It was terrifying and an overwhelming thing to face at 18 years old.”

Only four months prior to this fateful day, Howell had exchanged vows with his high school sweetheart, Robin. What should have been a year spent basking in wedded bliss quickly turned into a nightmare.

“Robin was going to college to get her teaching degree, but suddenly found herself a newlywed and a nurse, having to take care of me night and day,” Howell said. “I’m so thankful she came from a good, strong family with a foundation of faith.

“I guess being in love that young, you sign up for better or for worse – our worse just happened right at the beginning. She let me know every day that she was there for me and wasn’t giving up on me so I knew we would make it.”

Howell had developed ulcerative colitis when he was 15 years old after taking a drug used for acne treatment that can have serious side effects. The condition, which was seemingly under control, had apparently continued to escalate through the years unbeknownst to Howell, eventually taking over the colon and causing the rupture in November.

With the 1993 tour season starting in a few short months, it seemed that the distraught Howell would be forced to watch from the sidelines not only the following year but, according to his doctors, potentially the rest of his life.

“I had my first major surgery immediately, in November of ’92,” he said. “My doctors kept telling me being a pro fisherman was going to be a very difficult dream for me to pursue because of the issues this illness caused.”

With the May 1993 deadline for his first pro tournament looming, Howell went in for his second major surgery in January of 1993, and again for a third major surgery the following month.

“Within three months, all of my colon, large intestine and involuntary muscle was taken out,” Howell said. “I had to use an ileostomy bag and relearn how to function. Only being 18 years old, I didn’t really have a true sense of the world and reality. I had grown up in a Christian school but had never really had any adversity at such a young age.”

Howell attributes his faith and family for carrying him through this trying time.

“Thankfully my mom kept me in church growing up and I had been rooted in a strong faith in God,” he said. “I honestly didn’t know if I would make it past this, physically. That faith in something much larger than myself ended up being the foundation that gave me the strength to make it through.”

While it should have taken more than 18 months to recover from the illness and subsequent surgeries, Howell had all three surgeries and recovered in less than four months.

“It was nothing short of a miracle,” Howell said. “ I should have been down and out for the count, but the healing power of God enabled my surgeries to go smoothly, my recovery to be swift and my journey to continue without missing a beat.”

At 5 feet, 11 inches and only 118 pounds, Howell returned to fish a tour-level circuit in May 1993 without ever needing to miss a tournament.

“When adversity truly hits you for the first time, you quickly move from ‘religion’ to ‘relationship’ in your faith.“

“In that moment, at my darkest place, God’s power came in and not only healed my body, but restored me and solidified my faith and trust in Him.”

Howell said he sees many parallels between his career as a professional angler and the lifestyle of faith he chooses to live.

“Day in and day out, we’re out there on the water, chasing after that green fish. We can’t always see it, but we know it’s there,” Howell laughed. “That’s much like faith because you are chasing after something you can’t always see, but you know exists. Occasionally you’ll get a glimpse of it, or will have experiences in life where you know beyond a shadow of a doubt it’s real.”

Shortly after his third surgery, Howell was at a Fellowship of Christian Athletes (FCA) event when a traveling evangelist asked if he had been sick. Howell conveyed his story to the man, who told him the only way to make anything good come out of that tragedy was to use it to help someone else.

Paying Forward the Power of Faith

Howell took those words to heart and prayed about them. He had never done any public speaking, but knew he wanted to be able to use his experience to help others. At 19 years old, Howell drove to Lake Eufaula, determined to share his story with a local youth group.

“I remember it like it was yesterday,” Howell said. “I had written a ton of notes and felt like I was super prepared, but then I got up in front of everyone and began crying as I told my story. Within a few minutes, I was crying so hard the ink was running on my papers and I couldn’t read any of it. It was a disaster! But somehow, through the lack of my ability, God used that experience to reach those students.”

Howell knew God had placed a special calling on his life, not only to be a fisherman, but a “fisher of men” and to share his story of faith and provision with others on this journey.

“I started going to more events and sharing my miraculous testimony time and again,” he said. “Over the years I’ve been blessed to encounter others with some of the same types of health issues and have been able to point them in the right direction to find better medical attention or assistance they didn’t know was available to them.”

Howell went on to have a dozen more surgeries and hospitalizations over the next 28 years, but in each situation he was always reminded of the faithfulness and peace he found in the midst of those trials.

“Our faith in God has matured so much as Robin and I have grown together. We chose faith over fear and to live with a thankful mindset long ago and have met people all over the country who have found hope and healing through our struggle.

The Platform of Faith Takes a National Stage

As Howell stepped out in faith to share his story and his fame, his platform continued to grow with his 2014 Bassmaster Classic win at Guntersville, Alabama, his biggest win to date and another victory where he experienced divine intervention.

“I was in 11th place after two days of fishing and no one thought anyone outside the top 10 could have a chance of winning,” Howell said. “I was speeding up the lake during the tournament when I felt like God was telling me to turn around. I could see myself clear as day, catching fish by a bridge, but the only bridge I knew about was in the opposite direction.”

He followed the feeling and turned his boat around, heading for the bridge.

“I pulled up, threw off my life jacket, threw a line in and began catching a fish on every cast,” Howell said in amazement. “I won that world championship by 1 pound that day, making the greatest comeback in bass fishing history at the time.”

Howell walked away from that tournament with not only a $300,000 paycheck, but another example of faith that triumphed in the face of adversity.

“The COVID-19 pandemic is a reminder that we live in an imperfect world and everyone goes through the same struggles,” Howell said. “Trusting solely in ourselves leads to worry and fear because we can’t do it alone, but when we put our faith in Him, we can be assured He will carry us through the hard times.”

The MLF pro and 27-year veteran of tour-level competition has since accumulated 45 Top-10 finishes and more than $2.2 million in winnings in his career. Even more impressive: He’s helped to raise $1.5 million over the past nine years for King’s Home, a charitable organization that is dear to the family’s heart. To raise these funds, the Howells organize an annual giveaway of his tournament boat at the end of each season.

“King’s Home provides Christ-centered homes and services for at-risk youth, women and mothers,” Howell said. “They contacted me and asked if I would come share my story. While doing so, we fell in love with the people, the ministry and the organization and knew we were given this public platform to help those in need.”

“The bad times certainly hurt, but I wouldn’t appreciate the good times near as much if I hadn’t gone through pain and struggle,” Howell said. “Hard times allow us to see how fragile our lives really are and how quickly things can change. You have to fall in love with Jesus, choose faith over fear and go all in – that’s the only way to know for yourself what’s real.”

Quantum Hooks Up with James Watson