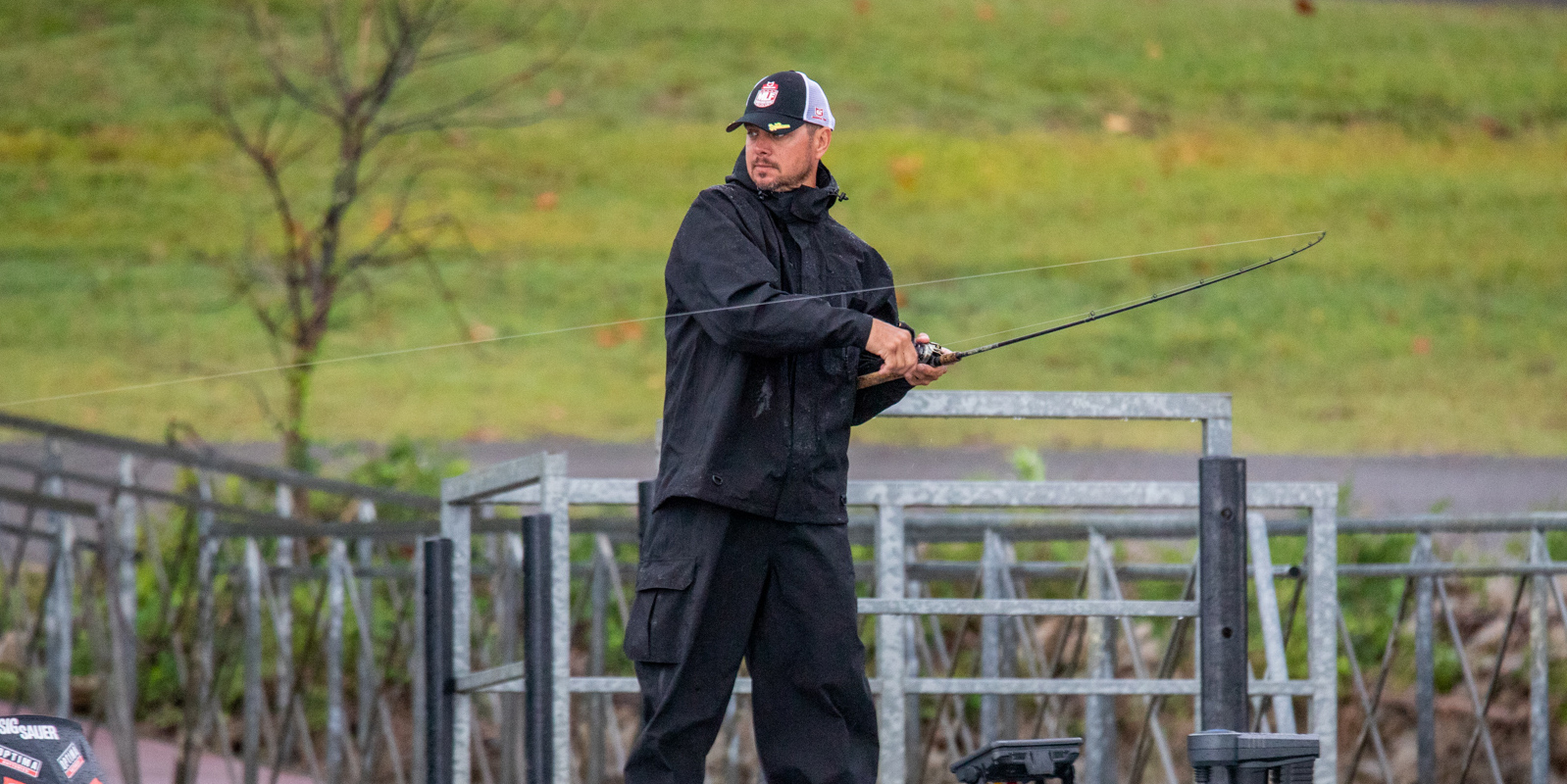 Jason Christie was the second MLF pro to reach the 14-pound Target Weight for Sudden Death Round 1. Photo by Joe Branch

MUSKOGEE, Okla. – After three Elimination Rounds of the Sqwincher Patriot Cup Presented by Venmo on Fort Gibson Lake, the qualifying anglers moved on to the Sudden Death Round.

The anglers were given a Target Weight of 14-pounds. The first four anglers to reach the weight goal moved on to the Championship Round, with Mark Rose and Jason Christie being the first two to advance.

Rose Starts to Figure Things Out

Mark Rose found a pattern that reminded him of his early years bass fishing the oxbows on the Mississippi River during high water periods, by targeting suspended fish around green bushes.

“The fish were sitting just under the canopy on the surface and feeding on shad. The bushes had to be 8 or 10 feet of water, but the bass were just under the green canopy,” Rose began.

“The Menace had the perfect profile and the shad were really dark, so I went with black and blue. It was small and compact and that’s what they wanted,” he said. “It’s all a process during Cup events because you have no practice and have to rely on what you’re seeing. I was noticing big balls of shad and that bait was a perfect match to their size.”

Rose rigged the bait on a 4/0 Mustad KVD Grip-Pin hook and fished it with both a 3/8 and 1/2-ounce Strike King Tour Grade Tungsten weight.

“I started to scratch off the painted finish of the weight so I could have a shiny silver finish to give it some flash like a shad,” Rose said and said that would pitch into the bushes, let it fall through the canopy and then repeat the process.

His rod of choice was a 7’2″ Lew’s Team Custom Pro Mark Rose Ledge casting rod that he paired with a 7.5:1 Lew’s HyperMag reel spooled with 20-pound Seaguar Tatsu fluorocarbon.

“I designed that rod for deep football jigs, but it is an excellent pitching rod as well,” added Rose.

Oklahoma pro Jason Christie has fished Fort Gibson many times over the years and had more experience there than most of the other anglers in the field.

“A home-field advantage always has some advantages and disadvantages, but that day it helped me. I caught some fish on places that have been good to me in years past,” said Christie.

With Fort Gibson’s high water, Christie started off fishing flooded bushes before switching to another pattern.

“I couldn’t find a concentration of them up shallow, so I started targeting hard spots and underwater points to look for groups of fish. They were all in water that was six or seven feet deep,” Christie added.

He caught fish on a handful of lures that day, including a 1/2-ounce Booyah Hard Knocker in the Flashy Momma color. Christie fished it on a 7′ Falcon Rods Cara “All-Around” rod with a 7.5:1 Team Lew’s HyperMag reel spooled with 16-pound Sunline Sniper fluorocarbon line.