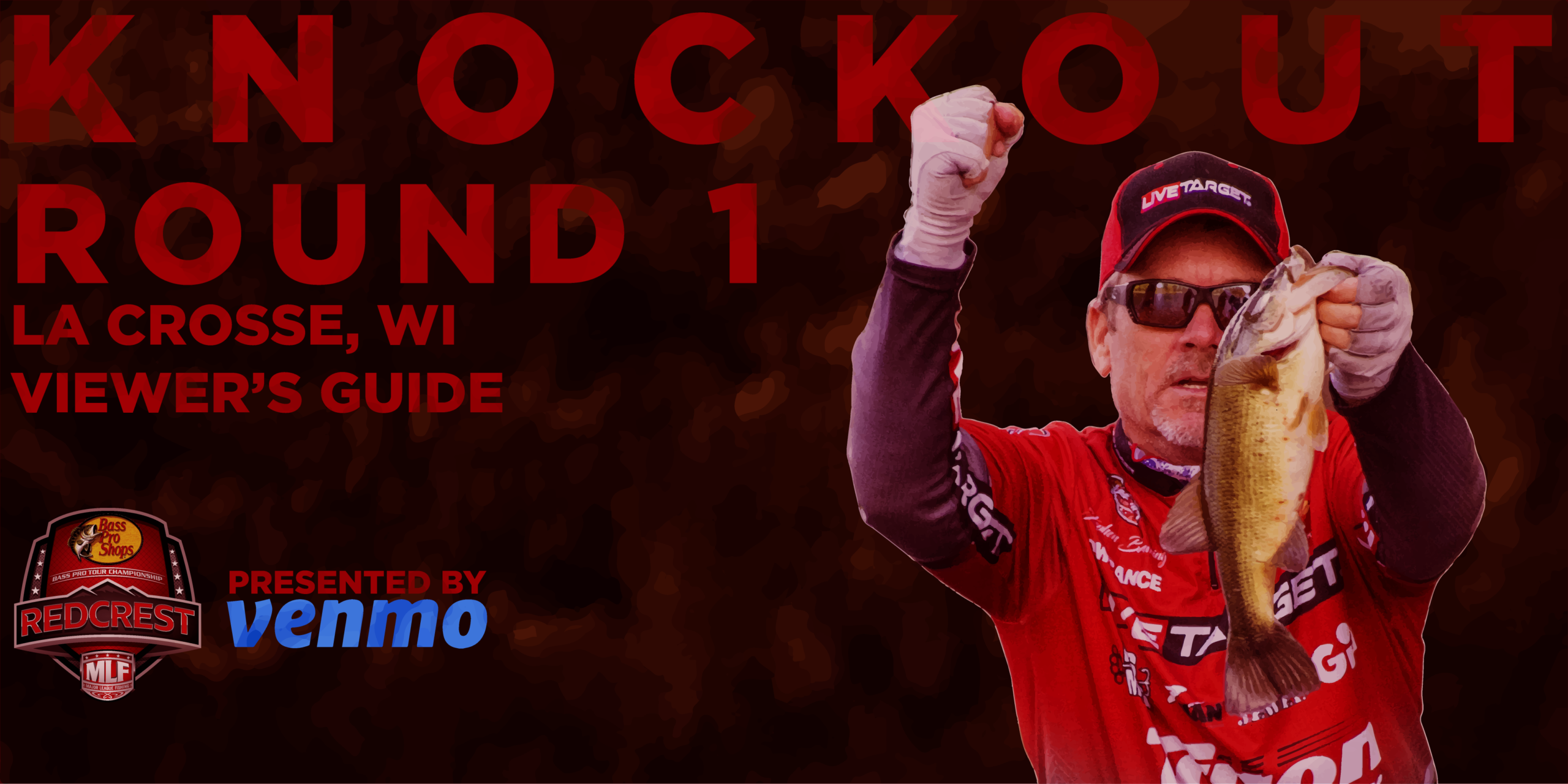 Stephen Browning is part of the field of 10 pros vying for a Top-5 finish in the first Knockout Round at REDCREST Presented by Venmo.

LA CROSSE, Wis. – The sure sign of a successful professional bass angler is the ability to figure out a volatile river on the fly. And for the first Knockout Round of REDCREST 2019 Presented by Venmo, the fishing world was able to witness 20 of the best pros in the world continue to make hour-by-hour adjustments in an effort to advance to a $300,000 Championship Round.

Those instinctual adjustments will be part of the storyline this Saturday when the third episode of REDCREST premieres on Discovery Channel (simulcast from 7 to 9 a.m. in both the Eastern and Pacific time zones).

Time to Pick up the Pace

As Knockout Round 1 got underway on Pool 8 of the Upper Mississippi out of La Crosse, Wisconsin, the field of 10 competing pros had already worked the river from La Crescent, Minnesota to Genoa, Wisconsin, eking every spare bite out of backwater sloughs and main-lake stretches that were becoming stingier by the day.

But because of the “win and you’re in” format of the Knockout Rounds – where weights from the Shotgun and Elimination Rounds were zeroed and only the Top 5 advance to the final day – the necessity to conserve fish and fishing spots went out the window. Add the fact that the Championship Round would be contested on a different fishery (Pool 7) and you had the recipe for a 10-angler sprint for a Top-5 finish, and a shot at the $300,000 REDCREST championship.

“This Knockout Round will be the first day all week that I’ve gone ‘full tilt,’” admitted Greg Vinson. “(Instead of) just trying to manage the fish I have to make it to the finals, now it’s about winning. Somebody is going to leave here the first-ever REDCREST champion. I’ve been close to winning a lot of tournaments in the past – and some big ones – and it’s time to win one. There would be no bigger win than the first-ever REDCREST.”

Vinson is an angler to watch out for in this Saturday’s broadcast of the first Knockout Round. The Alabama pro had kept an even keel through the first two rounds of competition, putting 48 pounds, 7 ounces on SCORETRACKER® in the Shotgun Round and 50-4 in the Elimination Round, connecting with the same volume of fish in both rounds.

“The Mississippi River, even though it’s a long way from home, I’m fishing a lot of similarities (with my Alabama fisheries),” said Vinson. “(I’m) fishing current, and how fish relate to that current. I’m real comfortable with that.”

On the opposite end of the spectrum, a handful of anglers fishing Knockout Round 1 had put up impressive numbers in the Shotgun Round, and then laid off in the Elimination Round to look for new water or develop new patterns. Tops among those were Stephen Browning and Mike Iaconelli, both of whom connected with more than 50 fish on Day 1 (58 for Iaconelli, 53 for Browning) but then backed off in Elimination Round competition to the tune of 34 and 35 fish, respectively.

Major League Fishing’s REDCREST Knockout Round 1 Presented by Venmo premieres Saturday, Dec. 14 on Discovery. Viewers on both the East Coast and West Coast (Eastern and Pacific time zones) can watch from 7 to 9 a.m.