Rojas, Myers, Montgomery Make the Most of Stingy Lake Okeechobee 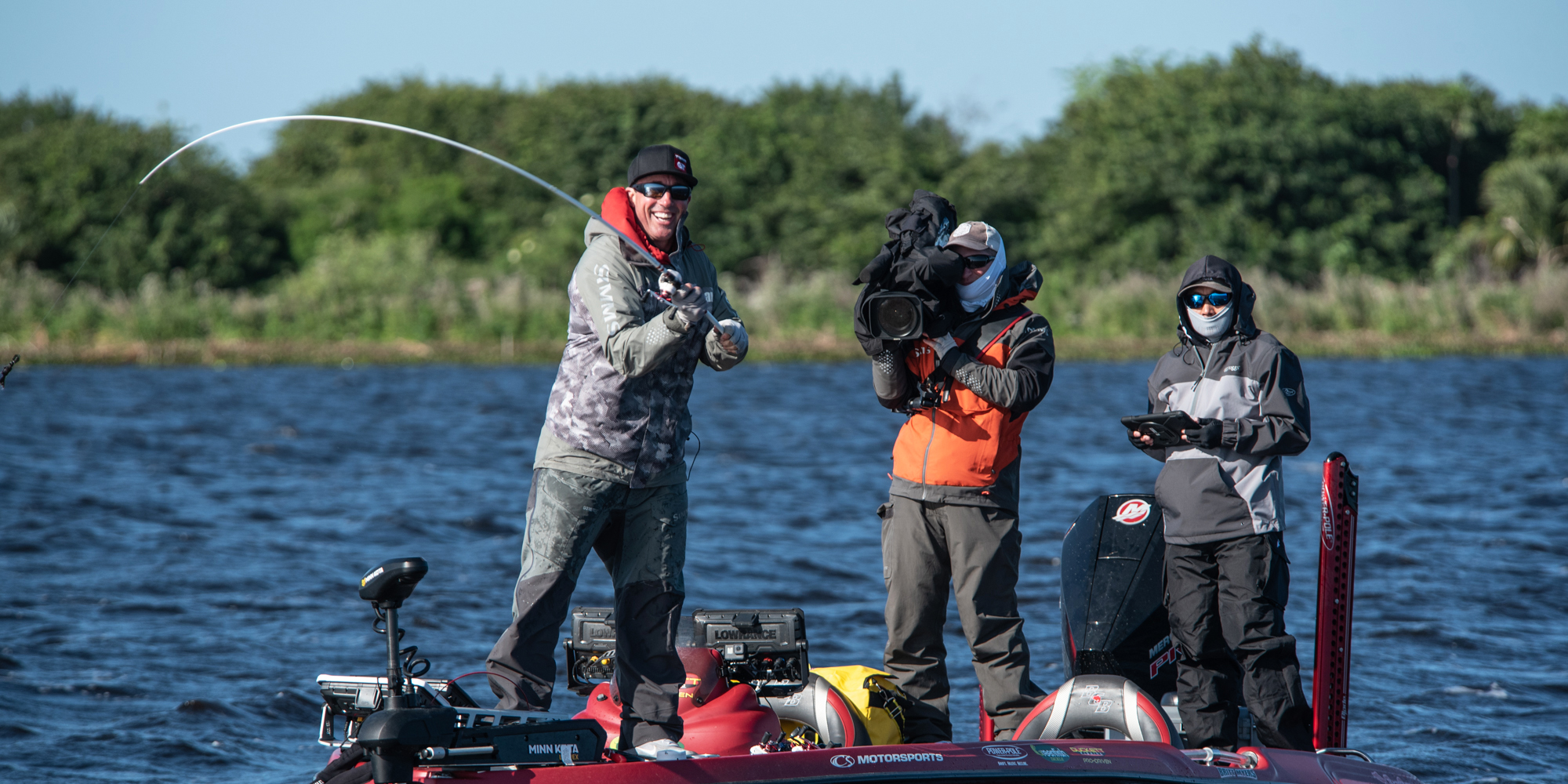 Britt Myers held the lead for the majority of Qualifying Day 2 before Dean Rojas hit an afternoon flurry. Photo by Garrick Dixon

OKEECHOBEE, Fla. – Leading up to the Bass Pro Tour Favorite Fishing Stage Two Presented by Bass Cat, MLF NOW! analyst JT Kenney shared his “Kenney’s Keys” for the week on Lake Okeechobee. Kenney acknowledged that the first day of a cold front is generally not bad fishing, but the days right after the temperature drops are frequently slower.

Kenney was spot-on with that assessment.

Water temperatures dipped on Saturday as overnight lows fell into the 40s on Friday night/Saturday morning, something that Florida bass are definitely not fond of. As a result, the bite was noticeably slower in today’s Qualifying Round than the previous day thanks to high winds and cooler water temperatures.

Saturday’s Group B anglers scored 71 bass for 214 pounds, 7ounces, a noticeable drop in the action from the previous day, when Group A landed 106 bass for 312-9.

The good news for the anglers who fished on Day 2 is that nobody is out of contention. Two anglers finished in the Top 20 with a single bass, including Scott Suggs with a 6-11 that was the biggest fish of the day. The final spot inside the Elimination Line (20th place) is just 4-3.

Rojas at the Top

Dean Rojas started slowly, failing to land a scorable bass until 11:31 a.m., but then ended the day with the most fish caught and the highest total weight. Rojas totaled seven bass for 20-5.

“What a day,” Rojas said. “It didn’t start very good, but it ended much better.”

Rojas made a gamble that his main area wouldn’t be blown out by the wind, and it almost cost him as his primary spot didn’t produce a single scorable fish. He made a small move to a different area and found better water clarity and biting bass in the afternoon.

“I’m excited about the finish and we’re halfway through the Qualifying Round,” Rojas said. “The weather is going to get better starting tomorrow and I like my chances the rest of the week.”

The 2-pound variable minimum weight affected the strategies of anglers all week. Rojas was bit especially hard by the rule and weighed multiple bass weighing 1-15, or just one Lake Okeechobee shiner away from being scorable.

Britt Myers didn’t start in his best area from practice due to the wind, but where he did stop ended up producing for him right away, and he never left. He closed the day with five bass for 18-4.

“The place I wanted to fish was going to be trashed with the wind blowing in on it, so I told myself I would give myself an hour at another area,” he said, and the result was an almost immediate success. Myers landed a 5-9 within 20 minutes of starting the day.

About an hour later, he put a 5-12 in the boat and decided to camp there all day.

“The fish told me they were there, so I stayed,” Myers added.

He was able to catch three more fish and held the lead for a good portion of the day. Looking ahead, the General Tire pro is confident in his area and is banking on conditions improving.

“Having a day off and letting the water clear up a bit and giving the area rest should be good,” he said.

Andy Montgomery only caught four bass total, but they were all solid. His total for the day was 17-02, and that included a 6-6.

“It was a really good day considering the conditions,” Montgomery stated. “I practiced specifically to find areas that were protected from the wind, and it still got muddy.”

Montgomery, like Rojas and Myers, is confident and thankful for what they brought in today.

“I feel like I put myself in good condition to go straight to the Championship Round,” Montgomery said of his chances to win his group and skip the Knockout Round.

Group A is back on Okeechobee tomorrow and the conditions should be much better than the first two qualifying days. The predicted high is 75 degrees with winds less than 10 miles per hour, a vast improvement on their previous attempt to tame Okeechobee.

Qualifying Round daily awards were:

Watch all three periods of competition during the MLF NOW! live stream beginning at 7:45 a.m EST February 21-26. Watch free on MajorLeagueFishing.com, the MLF app or the MyOutdoorTV app.

The General Tire Takeout begins at approximately 4:15 p.m. EST after each day of competition.