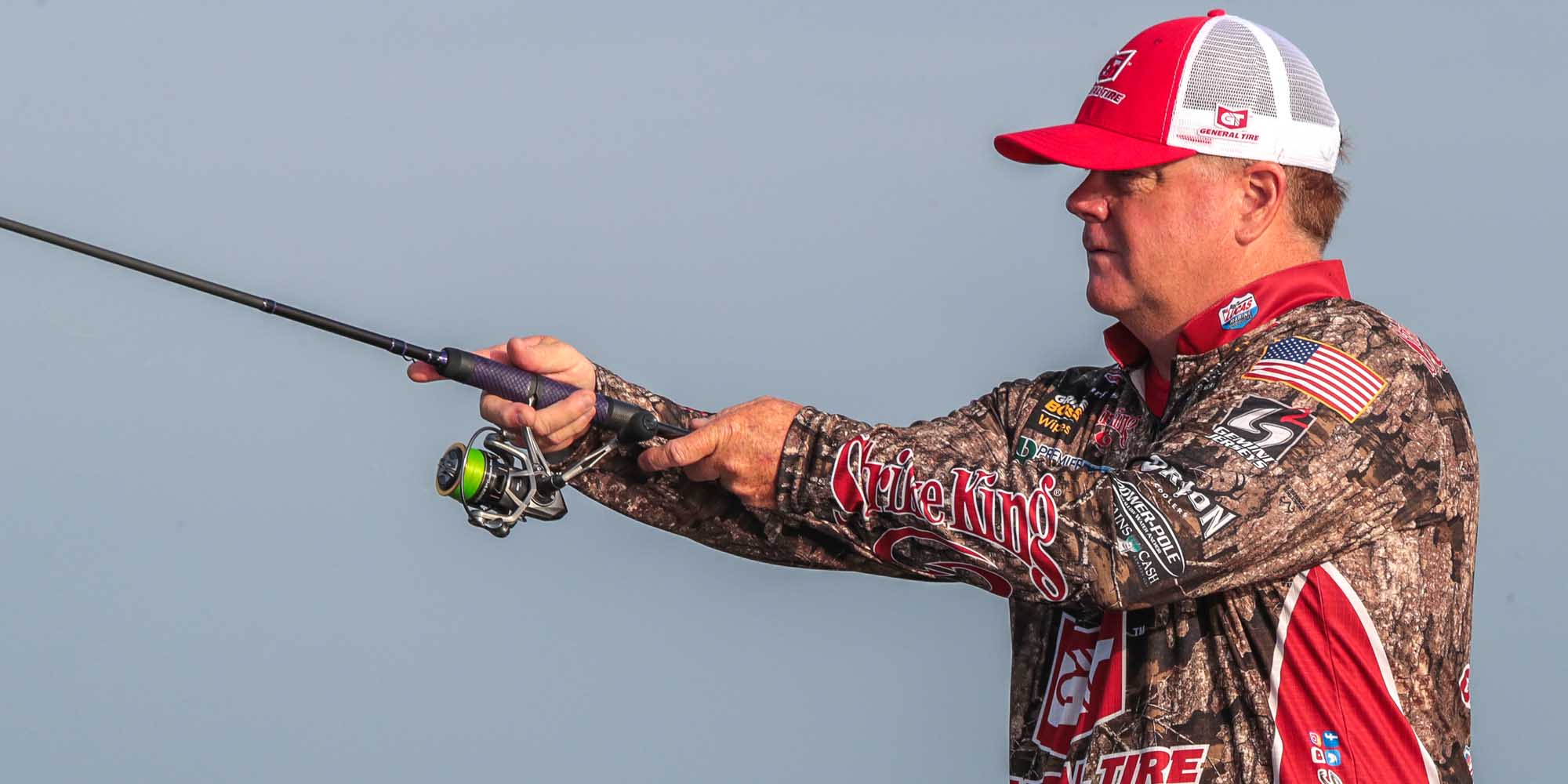 Fishing offshore with finesse presentations is nothing new to the world of bass fishing. Anglers use drop-shots, shaky heads and all sorts of small offerings in deeper water when the fishing gets tough. But Plano pro Mark Rose has refined the offshore finesse approach even further.

For him, it’s about cashing checks, making championships, staying relevant in the points race, and winning when he can.

“For me, I take into consideration the format I’m fishing,” Rose admits. “Am I fun fishing or fishing competitively? If I’m fishing in a tournament, you’d better believe I have a finesse rig of some nature ready.”

The most recent example of Rose’s decision making was at Heavy Hitters on the Kissimmee Chain in Florida. Rose employed finesse gear throughout the competition, finishing third in the event and weighing a behemoth 9-pound, 2-ouncer that won him a $25,000 big-bass bonus check.

“At Heavy Hitters on the Kissimmee Chain, I had a competitive decision to make,” Rose says. “Since the event was changed to be fished by the entire field and points were counted, I was thinking more about making REDCREST. My goal is to always stay consistent. For my entire career that consistency involves producing as many bites as I can get.

“A 2-pound minimum scorable bass had to be taken into consideration in Florida, so moving offshore and using finesse baits made sense to me. That same type of move will work in other parts of the country as well.”

“Deep” is a relative term, depending on the body of water you’re fishing. While many anglers are geared toward pitching at visible targets, Rose uses the same concept, but includes non-visible offshore targets to reap the benefits of less pressured fish.

“In many lakes, like we fished in Florida, offshore grass is a big key for finding summertime bass,” Rose advises. “Cover, food, and oxygen are what you need to find bass in the area you’re fishing. Offshore is where you can find a lot of these things during the summer, and you tend to find more fish in offshore areas than you do fishing the bank. Plus, the bank tends to be beaten up because it’s the most obvious cover to fish.”

Rose is well known as one of the most adept offshore anglers in the world, as his resume of wins and Top 10s prove. But he didn’t start his professional career as a master of the offshore bite – quite the contrary, he started his FLW career fishing the bank, and made a conscious decision early on to learn all that he could about locating fish offshore.

“Moving offshore can also apply to a farm pond, a lake or a river, wherever we fish,” Rose says. “As lakes oxidize during the summer, the fish move around for most oxygen, shade, and food. That’s where the shad have gone, and the bass will follow the food source. Summertime is a great time to fish deeper water.

“Fishing offshore, like fishing visible cover, boils down to the ability to see things. That’s why a lot of guys fish the shore, it’s easier to see where you need to cast. The more experience you have with electronics, and the ability to understand you’re still fishing the cover like you are on the shore, the more success you’ll have.”

The bigger the water, the more intimidating it can be to fish offshore. Rose points out that it’s pretty easy to find out who’s put the time in learning to fish offshore when they roll into the Great Lakes.

“The Great Lakes are a good example of how anglers become dependent on shore fishing,” Rose says. “Inexperienced anglers will stay close to shore. Those with more experience will have more success out in the middle. We all grow up needing to fish by trees, stumps, logs, along shore – all that same stuff is out deeper as well. It all has to do with time on the water and experience. Plus, if you’ve never fished the Great Lakes, they can be intimidating and the shore can feel more comfortable.”

As he proved at Heavy Hitters, the offshore bite is not only about numbers of bass, but big fish as well. Rose is an advocate for smaller baits bringing home the bacon and the biggies.

“At Heavy Hitters, the choice to use a small worm was due to fishing pressure,” Rose says. “Those lakes mostly get fished with big swimbaits, big worms, big spinnerbaits, big swim jigs. People think big equals big. At Kissimmee, there’s a lot of fishing pressure and very hot summer temperatures. I just tried to go against the grain to test it and see if it would work.

“Going with finesse helps generate bites. I had previously caught lots of big fish on a shaky head and Carolina rig with a little worm. Caught bigs on them in the past. I tried it and caught 3-pounders early. I also caught the biggest bass of the tournament on a finesse worm. Still, I ended up getting beat by a bigger swimbait and crankbait, but I did take third and get plenty of valuable points for REDCREST.”

Rose Keeps it Simple with Baits

The Texas rig with a light bullet sinker is his choice for fishing grass. For fishing larger areas of open and hard cover – like shell beds and rocks – it’s the Carolina rig. Anytime Rose fishes hard cover, wood, or rock, and is throwing to specific cover, the shaky head is his go-to.

“I throw various Strike King Perfect Plastics finesse worms,” Rose says. “The 7-inch, 5-inch, or the Fat Baby finesse as well. You may say a little finesse worm can’t catch big fish, but I caught a 9-pounder on that little bait in Florida. The worm I throw the most is the 7-inch finesse worm. It’s probably the bait I’ve caught the most bass on in my entire life. If I had to narrow down to one bait, that’s it.”