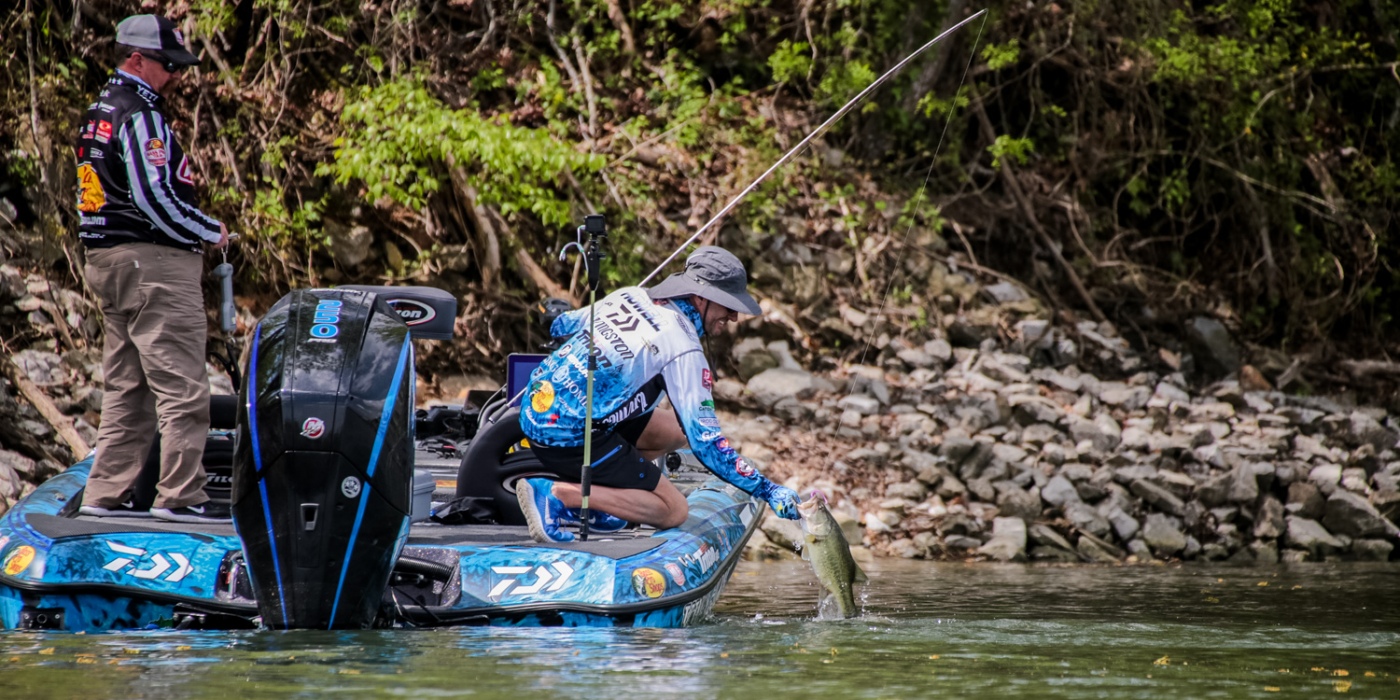 That might not have been exactly what Randy Howell heard in his mind as time wound down on his Elimination Round at the Bass Pro Tour Stage Five on Smith Lake, Alabama, but the 21-year veteran admits that he absolutely felt the pressure of the minutes dwindling by on the game clock.

Based on a pattern that he described as “so good in practice,” Howell entered the Smith Lake event with hearty confidence that he would do well. His first day was a little less than expected – he weighed in 20 pounds, 12 ounces to settle into 28th place, 6 pounds below the Elimination Line. But still, on a fishery where Jesse Wiggins racked up over 72 pounds in two periods of work, Howell wasn’t terribly anxious about re-establishing his pattern and making up the weight needed to make the cut.

But it never happened. Smith Lake’s post-spawn spotted bass transitioned away from Howell’s strong practice pattern, and while the clock kept tick, tick, ticking, Howell couldn’t relocate the bite. He finished that Elimination Round in 35th place with 37-5, placing him 70th overall in the competition, a turn of events that flummoxed the Daiwa pro.

“Man, it just makes me so mad that I couldn’t make the adjustments I needed to make to be successful in that event,” Howell says. “My pattern was just so good in practice, but those fish progressed so quickly with the warm weather. They move fast on those mountain lakes, and it really bit me. I didn’t move fast enough to keep up with them.”

Playing the Most Mental of Mental Games

Howell wasn’t the only one. Wiggins, who eclipsed the Bass Pro Tour daily catch record with 49 fish for 72-4, felt the same tick, tick, ticking pressure in the Knockout Round, where he weighed only seven fish for 9-9. Jacob Wheeler, who blasted 31 fish for 61-15 in his first day of competition, caught only four fish for 6-10 that same Knockout Round.

As Howell watched it all on the MLF NOW! live stream, he saw explicit proof of how debilitating the tick, tick, ticking of the SCORETRACKER® clock can be.

“If you don’t meet your expectations or you feel like you’re getting a hole, mentally, it absolutely kills you,” Howell admits. “I was watching that day when Jesse Wiggins was saying ‘Man, I just hope I don’t finish last!’ just a couple of days after he caught 72 pounds, and I knew exactly what he was going through. I fell into the same hole where you just don’t think you can overcome it, and it rattled me bad. It’s one of those times in my career where I wish I had four hours to do over again.”

As Howell begins to piece together his internal Jenga tower of strategy and fish-catching acumen in preparation for the Berkley Stage Six Presented by TrueTimber on Table Rock Lake, he’s already hyper-aware of the need to stay flexible and diverse on a fishery that will probably be in the same unpredictable post-spawn condition as Smith Lake was.

“Water has been really high (on Table Rock), so it’s up in the trees and bushes,” Howell says. “There’ll be a lot of numbers caught, but water will be fluctuating and fish are finishing up the spawn. I’m thinking that adaptability and versatility are going to be key. You’re going to have to figure out a way to stay on top of it daily, and try your best to be open-minded.”

How Do You Spend Your Time?

Table Rock’s serpentine, multi-fingered layout will likely be the cause of more tick, tick, ticking-clock anxiety as the two 40-angler competition groups pursue the patterns and locations they identify in a day-and-a-half of practice. Commit too long to a spot or run too far to find your fish and you’re up against the clock.

“Table Rock is just HUGE,” Howell says. “Of all the places well go all season, this is the fishery where you can run the farthest. It has the James and White River arms, both of which you can run up into an hour from takeoff. It’s a place where you can run and run and run if you choose to, but that’ll be a big strategy factor: do you run to an area where you think you can do better, or do you try to stay put and get the most out of the spots you’re already fishing?”

The action starts on Table Rock on Friday, May 17 as the Bass Pro Tour Berkley Stage Six Table Rock Presented by TrueTimber starts Shotgun Round competition.

GALLERY: Tharp’s Practice Hints at Things to Come on Okeechobee