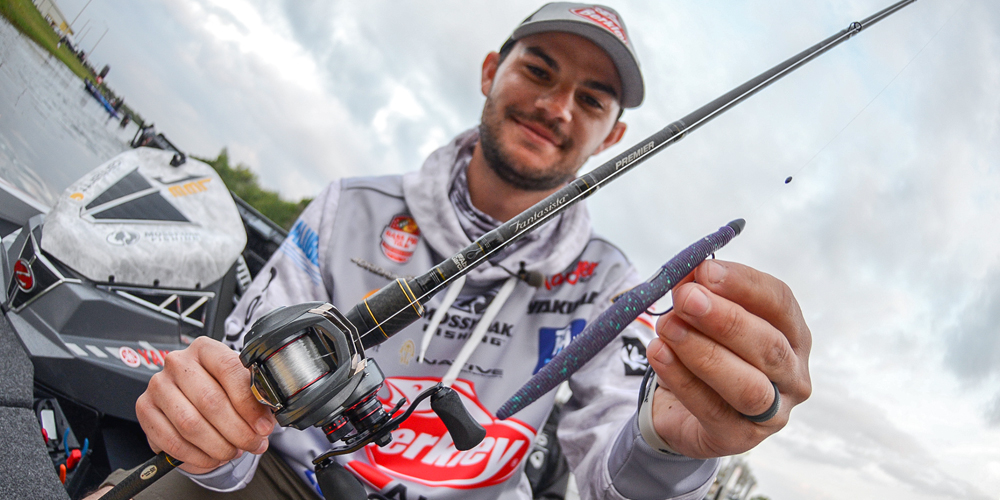 The Top 10 at Lake Okeechobee used a variety of baits to find success. Photo by Garrick Dixon

OKEECHOBEE, Fla. – Legendary Lake Okeechobee was stingy at times during Stage Two of the 2020 Bass Pro Tour regular season. Okeechobee presented a tremendous practice for many anglers, followed by a strong cold front, wind, rain and falling water temperatures for the first three days of the tournament.

Blown-out hot spots and some muddied up, cool water, and you get the idea: it was tough. But plenty of big bass were weighed and the Top 10 clawed and scratched their way through for an epic give-and-take battle to decide the eventual winner, Jacob Powroznik.

Here are the baits the Top 10 relied on most on Lake Okeechobee:

“I was swimming 7-inch Junebug worm, that’s it,” Powroznik said. “The Junebug color just looks right, kind of brown, in that tannic water.”

Powroznik Texas-rigged on a 6/0 Mustad Grip-Pin Wide Gap Hook with a 3/16-ounce Elite Tungsten weight ahead of it, using a 7-foot 6-inch medium-heavy Quantum rod and a Quantum Smoke S3 8.1:1 reel loaded with 65-pound Hi-Seas Braid.

He also caught a few earlier in the tournament on a black-and-blue V&M Baits Heavy Flipping Jig.

“The bass didn’t make it that hard,” Powroznik said. “They let you know what they wanted pretty quickly. In practice, I caught them on the worm and thought it might work out. I just swam it back pretty fast, maybe 4 or 5 inches under the surface.”

Clear water was a huge help on the final day. It allowed Powroznik see the targets he was casting to so he could be accurate in his presentation, specifically in hard-bottom areas, spawning areas in eelgrass, and off the reeds.

“Okeechobee has always been a special place to me,” Powroznik said. “Any cast you make can produce an 8-pounder. I won fishing where I fished with my dad for the last time before he passed away. I don’t care if that spot is getting pounded by 6-foot waves the next time we come back, I’ll still check it out.”

Neal used a ⅜-ounce homemade swim jig in black and blue with a Big Bite Baits Kamikaze Craw in 1099 color and a 5-inch Big Bite Soft Super Stick in black with a 4/0 Gamakatsu Hybrid Worm Hook.

He used a one-two punch of swimming the jig through vegetation and casting his stick bait at beds.

Neal’s prime area was the North Shore between Indian Prairie and Harney Pond, fishing eelgrass or hydrilla in 1- to 2-foot depths.

Wheeler fished a ¼-ounce black-and-blue or green pumpkin swim jig with a Googan Baits Krackin’ Craw in the Bama Bug color for the first two days and part of the Knockout Round. He fished the jig on a 7-foot 2-inch Wheeler Signature Series Duckett Rod with a 8.3:1 Duckett Paradigm reel and 40-pound Sufix 832 braid.

For part of the Knockout Round and the Championship Round, Wheeler fished a combination of a Rapala X-Rap Prop, Skitter V, and a custom-made prop bait, along with a popping frog.

Harney Pond, Monkey Box, and Bird Island were his most productive areas.

All lures were fished with 50- or 65-pound Sufix Braid on Tharp Series Ark Rods and Shimano Reels.

“I fished 1 to 1½ feet of water with hay grass and reed heads,” said Tharp. “I was keying on bedding areas with hard bottom.”

Sprague fished a variety of baits to make it to the final day. He fished a 5/16-ounce Strike King Tour Grade Swim Jig in perch color, alternating a Gene Larew Hammer Craw in Sooner Run, with a Strike King Rage Menace in Sapphire Blue as the trailer. The swim jig was fished on a 7-foot 4-inch heavy Lews Pro Ti rod with a Lews Pro Ti reel 7.5:1 loaded with Strike King 50-pound Tour Grade Braid.

Shryock stuck with a ⅜-ounce black-and-blue homemade swim jig with a Yamamoto Double Tail Grub and a Flappin’ Hog as a trailer.

“I looked for spawning flats with clean water,” Shryock said. “My best areas were Observation Shoal, Bird Island, and Kings Bar. Swimming a jig is how I caught all of my scorable fish.”

“It wasn’t a normal Lake Okeechobee to me,” Lee said. “I had nothing on Day 1 and ended up fishing pads and grass in the Taylor Creek canals off the lake on the second day. I found a couple of canals with some 3 and 4-foot deep water and those produced the bigger fish. The decision to go there on Day 2 saved my tournament.”

The jig was pitched to isolated cattail clumps around bedding areas.

Omori also had success fishing a ½-ounce Z-man Ever Green ChatterBait Jack Hammer in green pumpkin around lily pads. His combo of choice to fish the ChatterBait was a Daiwa Tatula Elite 701MHRB rod and a Zillion baitcasting reel loaded with 20-pound Sunline FC sniper.

Also in his arsenal was a Yo-Zuri Rattl’n Vibe that he fished using a 7-foot-5 medium-heavy Favorite Hex rod with 16-pound Yo-Zuri Top Knot Fluorocarbon.

Elam made his way to the final day by flipping and pitching black-and-blue creature baits with a ⅜-ounce weight and a 4/0 Gamakatsu G-Finesse Heavy Cover Hook and a Yamamoto Senko in black and blue with the same 4/0 hook and a 3/16-ounce weight.

He used a Shimano Expride 7-foot-6 heavy action rod with a 8.5:1 Shimano Metanium reel loaded with 20-pound Seaguar INVIZX. Elam got to the final day fishing canals, though they weren’t productive during the Championship Round.