VIEWER’S GUIDE: Sudden Death Round 1 Should Be Soggy 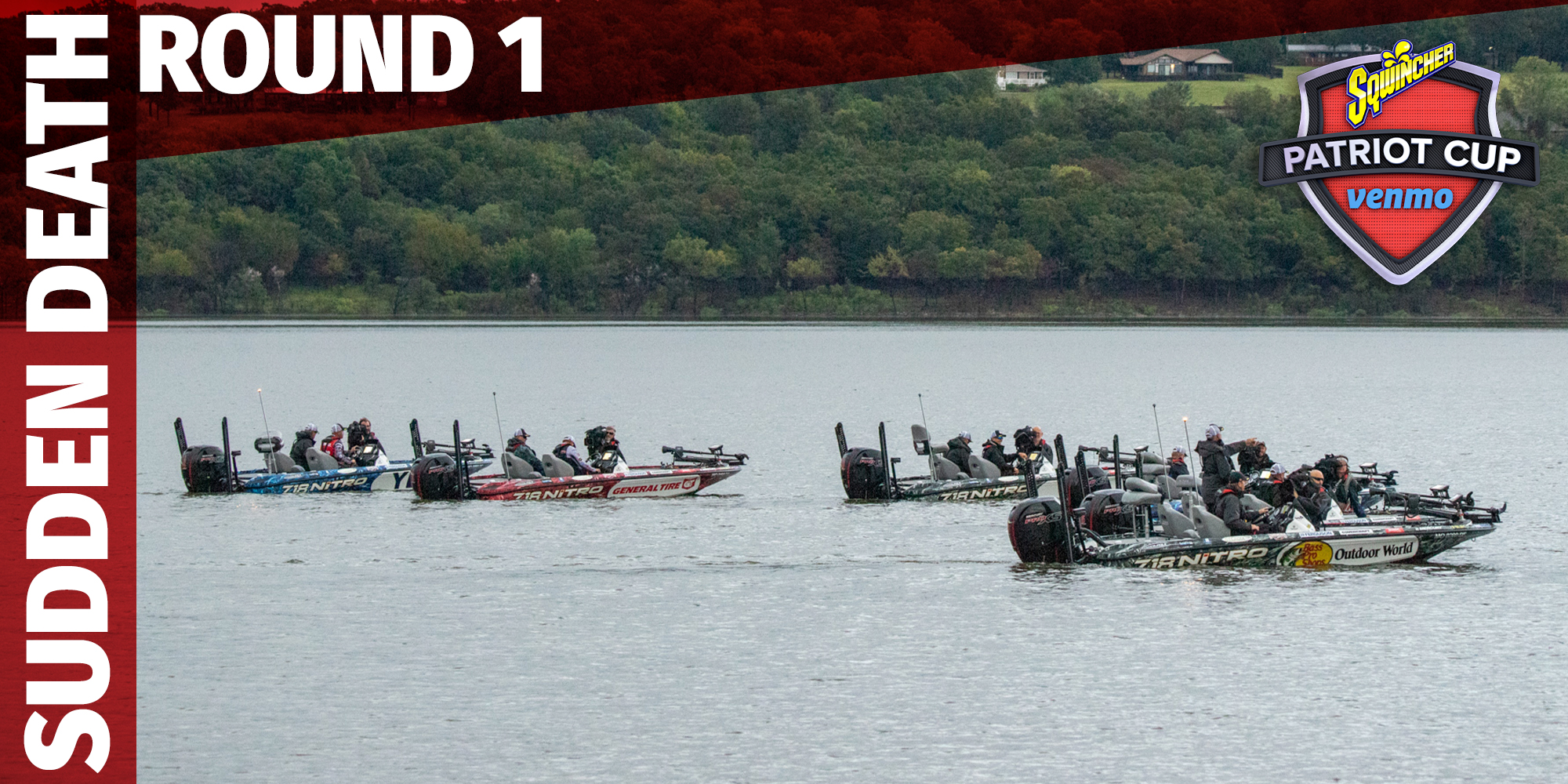 The nine anglers competing in Sudden Death Round 1 return to Fort Gibson Lake aiming for a 14-pound Target Weight. Photo by Joe Branch

MUSKOGEE, Okla. – The nine anglers competing in Sudden Death Round 1 will be battling with a soggy start to their Sooner State showdown. The pros will race to be one of the first four to hit the 14-pound Target Weight for the right to move on to the Championship Round of the 2020 Sqwincher Patriot Cup Presented by Venmo.

The nine anglers will return to Fort Gibson Lake, the site of all three Elimination Rounds. However, this time they will be on the complete opposite end of the lake: the southern third of the lake that includes Jackson Bay.

Although they’ve seen the lake before, MLF analyst Marty Stone expects this round to be a completely different animal thanks to the weather that rolled through eastern Oklahoma the night before competition.

“Sudden Death Round 1 is going to be different than any day they have fished here before,” Stone predicted. “Heavy rain is expected throughout much of the round and there was plenty of lightning with it the night before. That’s going to affect the fish and how they are positioned.”

The lower third of Fort Gibson Lake is filled with the same flooded cover the pros have seen in previous rounds. Pole timber, willow trees, buck brush and flooded shoreline bushes will be the main sources of cover for these fish. Jackson Bay is also home to multiple marinas, giving plenty of options for hard cover if that’s what the anglers are looking for.

The 14-pound Target Weight shouldn’t be that difficult to reach according to Stone. The big question is how quickly will the Top 4 need to hit the mark to move on?

“With the rain and cloud cover over the area paired with the lack of lightning, it shows me that the fish could adjust quickly,” Stone predicted. “We could see a major feed that this lake hasn’t seen through the first three Elimination Rounds, which means these fish could be biting early and often.”

Fighting for Four on Fort Gibson

Getting into the Top 4 out of this group of nine anglers is not going to be an easy task. There are proven winners everywhere in Sudden Death Round 1. The 2020 Bass Pro Tour Stage Three Champion Ott DeFoe finished second during his Elimination Round while Stage One Champion Jacob Wheeler is coming off of an Elimination Round 2 win.

Greg Vinson won Elimination Round 1 after a dominating topwater display on the upper third of Fort Gibson. Jeff Sprague already has a 2020 Challenge Cup on his mantle as he looks to win his second Cup event of the season.

Of course, you can’t look past the Oklahoma pros: Edwin Evers and Jason Christie. We all by now know Evers’ impressive stats from his domination of the 2019 Bass Pro Tour season. Christie’s home is just down the road from Fort Gibson Lake, a place he is certainly familiar with.

Mark Rose, Brent Ehrler and Luke Clausen are also looking to make some noise. Ehrler is the only one of the three with an MLF win to his credit.

The anglers will fish for three periods on Fort Gibson Lake, attempting to be one of the first four anglers to reach the 14-pound Target Weight. Those four will move on to the Championship Round while the other five will pack up their rods and head home.

The nine competing anglers bring us Sudden Death Round 1 on Saturday, April 25 at 2 p.m. ET on Outdoor Channel.