VIEWER’S GUIDE: What to Watch for Saturday on Discovery (7-9 a.m. ET/PT) 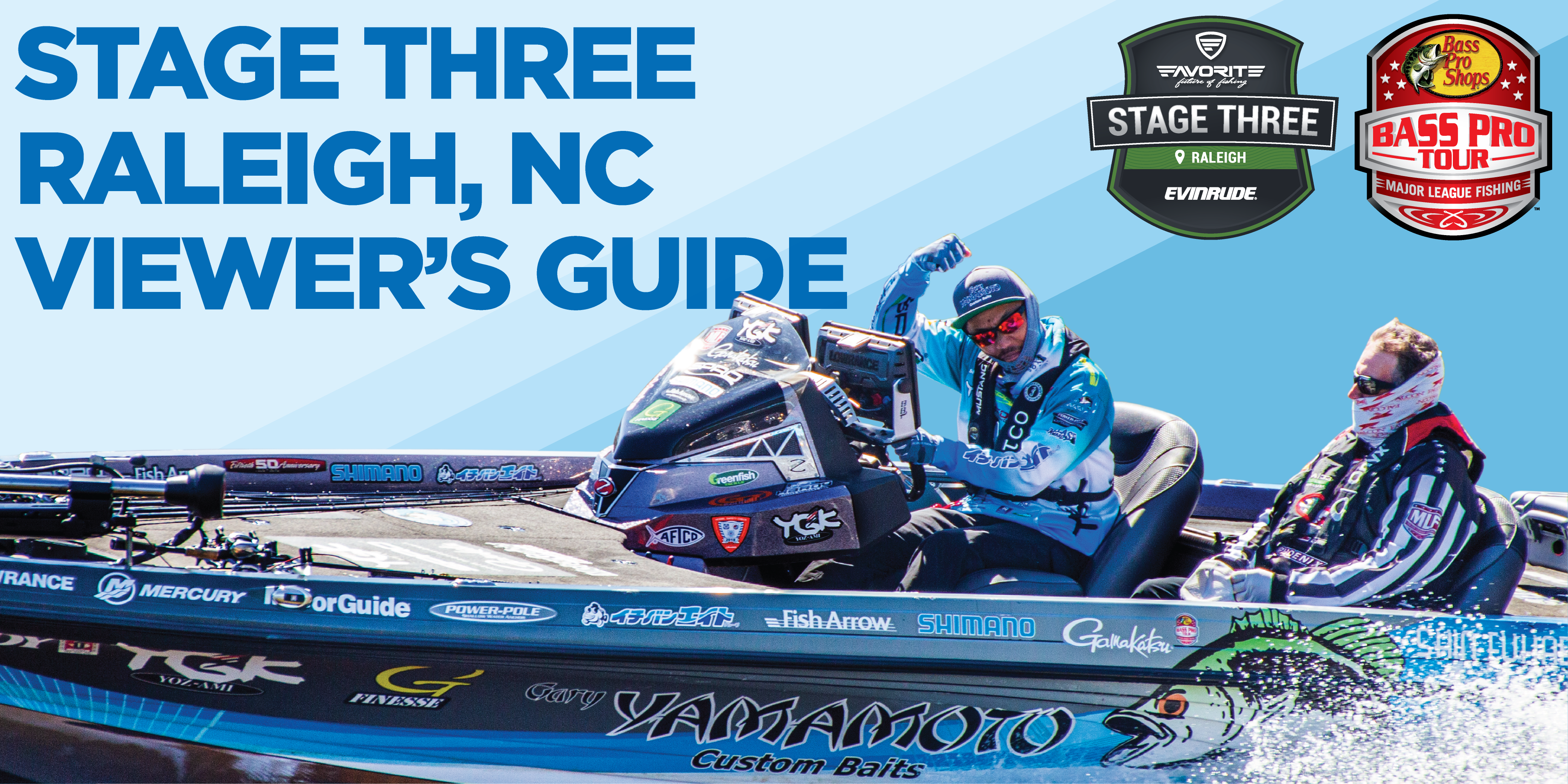 RALEIGH, N.C. – Nestled in the Neuse River Valley of northeast North Carolina, the city of Raleigh lies at the epicenter of the college basketball world. With the North Carolina State campus occupying 2,100 acres inside city limits, and both Duke University and the University of North Carolina lying within 30 minutes to the west and northwest, Raleigh is a city well-known among hoops fans.

After the MLF Bass Pro Tour arrived in North Carolina’s capital city for its third event of the 2019 season, Raleigh is now even more well-known among bass anglers.

As viewers tune in Saturday morning (7 to 9 a.m. ET/PT) to watch the third episode of MLF Bass Pro Tour on Discovery, there are several storylines to follow. Here are some things to pay attention to:

Previously known only among local and regional tournament anglers, the fisheries around Raleigh had never hosted a tour-level competition before the 80 pros fishing the Bass Pro Tour arrived at Falls Lake, Jordan Lake and Shearon Harris Reservoir for the Favorite Fishing Stage Three Presented by Evinrude.

But by the time the Shotgun, Elimination and Knockout rounds of Stage Three were finished on Falls and Jordan, it’s highly likely that Raleigh had made its way onto bass-fishing bucket lists the world ‘round: over 50 largemouth 6 pounds or better had made it onto SCORETRACKER®, including a 9-pounder by Todd Faircloth and a pair of 8-pounders in one round by Jacob Powroznik.

And the championship lake – Shearon Harris – was rumored to be even better.

“Shearon Harris is a special lake,” said MLF NOW! analyst Marty Stone, who lives an hour away from Raleigh in Fayetteville, N.C. “It’s small, but it’s so good. It has better numbers of fish than Falls and Jordan lakes, and it has huge fish, too.”

A Championship Change of Scenery

Discovery viewers may be surprised by the amount of grass they see as they’re watching the Championship Round unfold on Shearon Harris. Unlike the other lakes in the immediate area – most of which are defined by hard cover – this power-plant lake is filled with grass: primarily native primrose and bulrush, with some hydrilla.

That’s a stark contrast to the riprap and similar hard cover the Championship 10 fished during their qualifying rounds. Add to that the fact that anglers were not allowed to practice on Shearon Harris: As was the case in Stage One in Kissimmee – where the championship was held on a new lake – the field was given only a half-day “ride-around” on Shearon Harris, so viewers will be watching the final 10 breaking down the lake as they fished it for the very first time.

Which Pattern Will Win Out?

Because of the timing and weather patterns that hovered over the Tarheel State during competition, every day brought a new set of conditions. The Championship Round would be no different. With a strong cold front approaching, the biggest question as the final-day field prepared for Shearon Harris was “Shallow or deep?”

While the obvious go-to spot would seem to be shoreline cover, Stone was quick to point out that some of the biggest tournament bags ever caught in North Carolina were caught offshore on Shearon Harris.

“Before these fish pull into the shallows, they stage up offshore anywhere from 12 to 25 feet deep,” Stone said. “A lot of it is underwater humps and points and natural rock. When the anglers find them (offshore), that’s when some of the mega-bags are caught.”