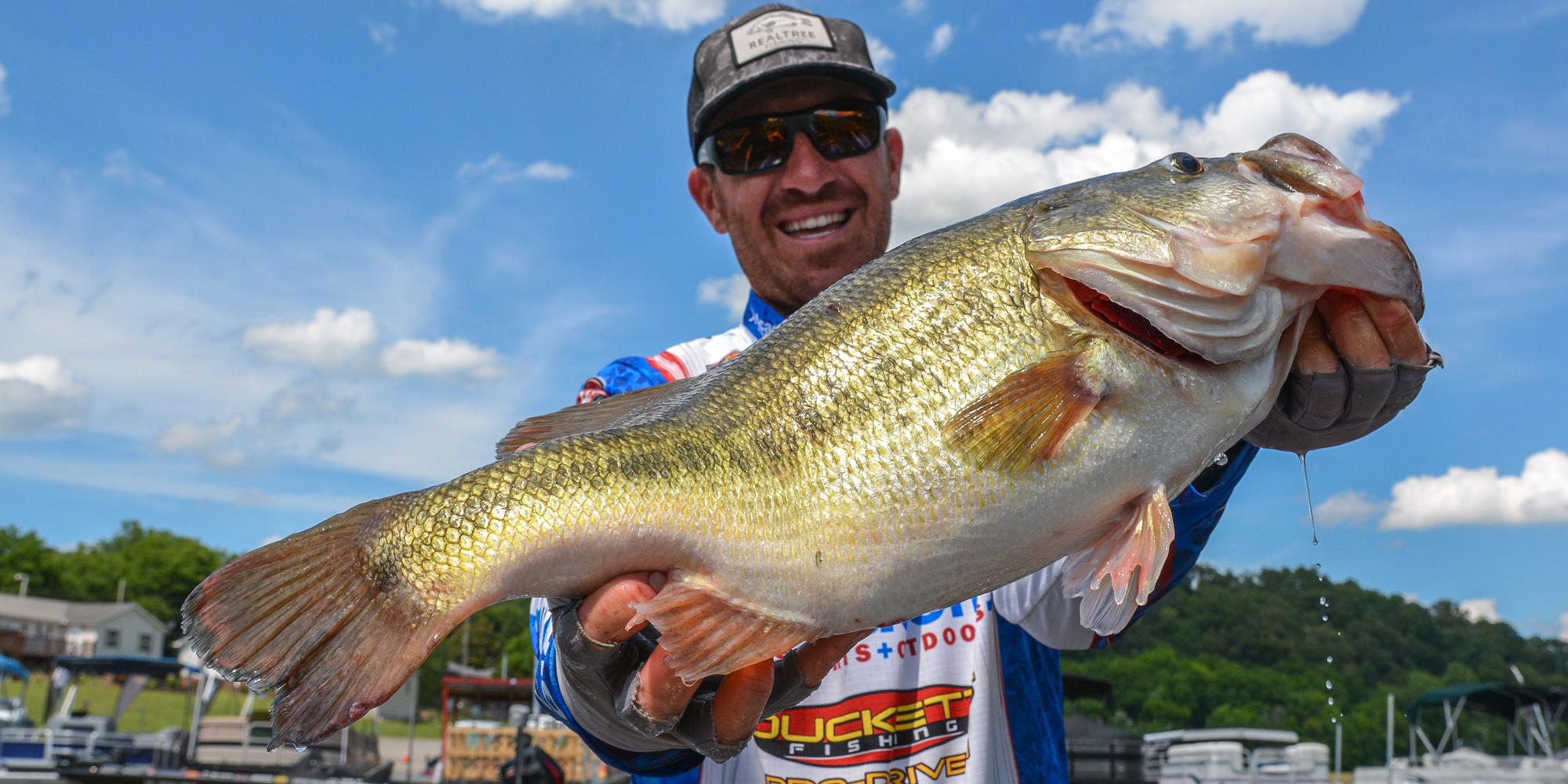 Jacob Wheeler weighed in his first career 10-pounder on Day 3 of the FLW Super Tournament on Lake Chickamauga. Photo by Joel Shangle

DAYTON, Tenn. – It’s safe to say that MLF pro Jacob Wheeler has weighed in thousands of bass in his tournament-fishing career. The Tennessee pro has seen his share of big fish – plenty of 7s, some 8s, even a few 9s – but none like the Tennessee River specimen he carried across the FLW stage this afternoon on Day 3 of the FLW Pro Circuit Super Tournament on Lake Chickamauga.

Buoyed by a Lake Chickamauga giant that weighed in at an even 10-0 pounds – the biggest bass he’s ever weighed in at a tournament at any level – Wheeler ended the day with 25-12 to retake the lead heading into Championship Friday.

“I was so ecstatic when I got that fish in the boat, it was unbelievable,” Wheeler said. “That’s a giant bite. A big fish is a 7-, 8-pounder on this lake, (but) a 10 is a giant. I feel at home, obviously, because (Chickamauga) is ‘the house’. I ran around, fished the way I loved to fish, and was really relaxed.”

Wheeler may have lost just a little of his cool immediately after putting the 10-pounder in his live well: He forgot to cull one of the five-fish limit he had already caught, and made a cast before realizing that he had one fish too many.

The Duckett Fishing pro made a quick call to tournament director Daniel Fennel to report his mistake, and took a 2-pound penalty for having one fish over the limit.

“Listen, I don’t catch that many 10-pound fish, I might’ve lost my mind a little bit for a minute,” Wheeler joked.

What may not be so funny to the other nine anglers fishing Friday’s 10-angler championship is that Wheeler has barely touched what he considers his best stuff on a lake that he fishes as much as anybody within the three fishing-mad East Tennessee counties that Lake Chickamauga borders.

“I had some (offshore) stuff in my back pocket that I was sort of saving,” Wheeler said of his fishing areas on Day 3. “I have some stuff that I saved shallow, too. But I’m going to have to catch a really big bag (to win). Someone else could easily go out and catch a 10-pounder and have a 30-pound bag. I have to catch another 20-plus-pound bag to win.”

Daiwa pro Cody Meyer cracked jokes about Wheeler’s dominance as he loaded his own bag after Day 3 (“Wheeler’s one fish weighs as much as three of mine,” Meyer joked), but the former FLW pro had a solid day of his own, weighing in 18-15 on Thursday fishing community holes to creep into fourth place with 57-1.

“Everything I’ve caught fish on this week has been really basic community stuff,” said Meyer, who will be fishing the 29th FLW championship day in his career. “Those community holes have hundreds of fish on them, you just have to figure out how to get them to bite. I’m catching everything dragging drop-shots and Neko rigs, green pumpkin finesse worms – really basic stuff, but it’s the only way I can generate bites on that stuff.”

Alton Jones climbed into the Top 10 with a decidedly different approach, weighing in 19-2 on the day fishing isolated targets to push his total to 51-14.

“I don’t fish well in a crowd, so I didn’t graph around ‘the juice’ in practice like everybody else did,” Jones said. “I spent my entire practice looking for isolated main-lake targets – brushpiles or stumps – where I knew I could pull up and make a cast that nobody else has made.”

Follow the live coverage of the final day of the FLW Pro Circuit Super Tournament at FLWFishing.com. FLW Live will stream live on-the-water action from 8 a.m. to 2 p.m. EDT.