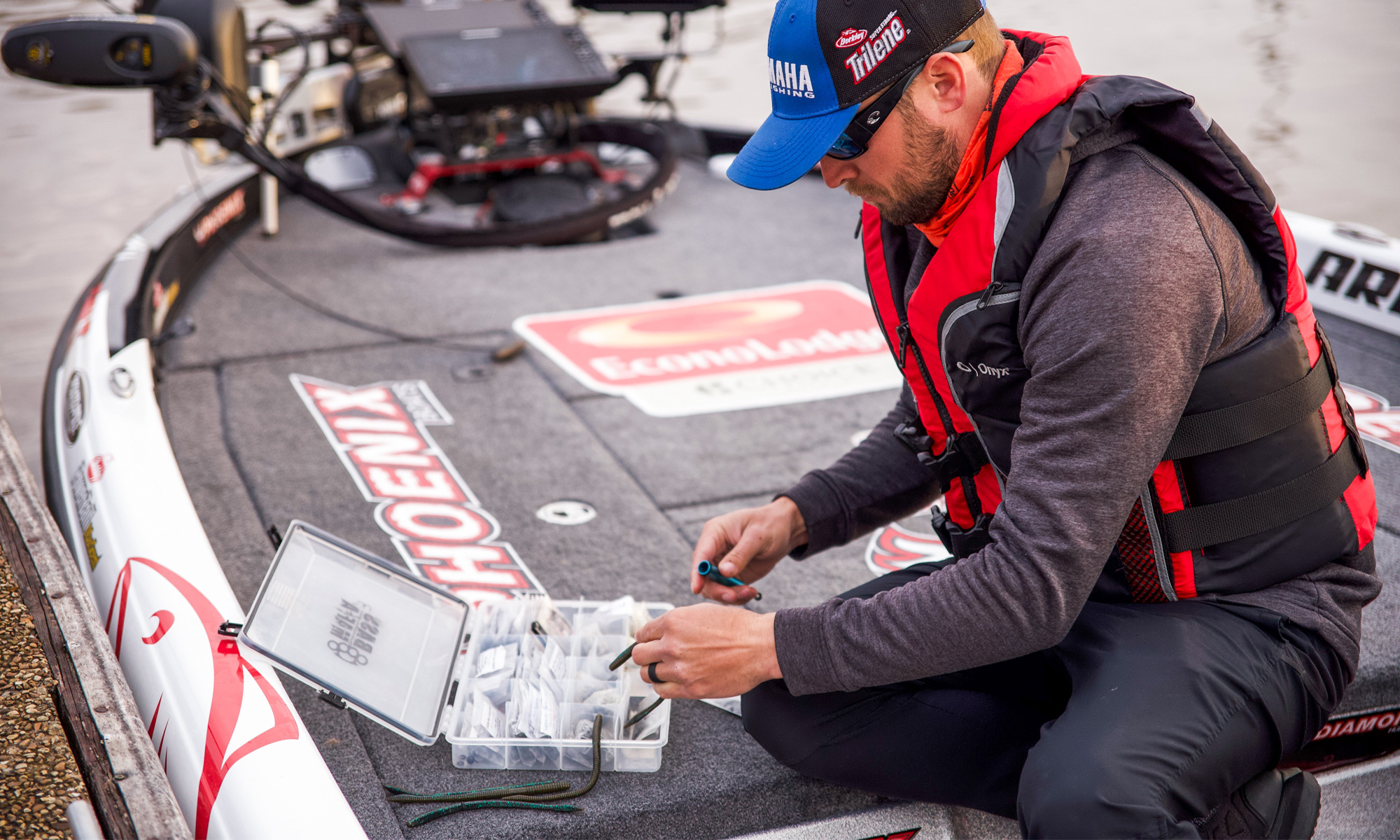 A Ned rig is one of Justin Lucas' go-to techniques during the spawn. Photo by Phoenix Moore

Like most of the bass fishing world, Justin Lucas has taken notice of one of the hottest techniques in bass fishing: the Ned rig. While this miniature soft plastic on a lightweight jighead excels when the bite is tough, Lucas has found it to be a must-have anytime the bass are around the spawn.

“I’ve always been a wacky-rig and drop-shot guy this time of year, but the Ned rig has been unbelievable for me the past two springs,” Lucas said. “It’s unreal how many bites you get with it and I’m not just talking smallmouth or spots; it’s been deadly for big largemouth as well.”

Lucas discovered the big fish power of this little rig during the 2019 Bass Pro Tour stop on Lake Chickamauga, where he found himself in fifth place in his group after two days of fishing. Since then, he’s become a firm believer in fishing it around spawning fish.

Instead of casting to fish that he sees with his eyes, Lucas prefers to pitch the Ned rig to likely spawning areas, and believes he can do this with extreme efficiency.

“If I see a fish on a bed, the Ned rig usually isn’t my first choice,” he admitted. “I think it’s better suited for pitching to dark spots, light spots, stumps, rocks and anything else I can see in the water. I think of anything where a bass could be spawning and pitch it in there. They’ll usually bite it immediately, so you can pitch it in, and if one doesn’t get it, you can move on to the next one.”

Fishing a Ned rig works so well for Lucas that finding the best stretches of spawning waters is the biggest key. The best spawning grounds offer a mix of the right bottom composition and isolated cover.

“A lot of times you’ll go into the back of a pocket or canal and there’ll be tons of dead water and then all of a sudden you’ll catch one on every stump,” Lucas said. “Those are the ‘magnet sections’ that draw in all of the fish in the area.”

Finding these key stretches can be done by fishing everything, or by looking for the clues.

“Generally, if you find flats and they have a sharp break, that’s where the hard bottom is,” Lucas said. “The places where it drops from say 2 feet to 4 feet, more often than not, you’ll have the right bottom composition for the bass to spawn.”

There are plenty of different baits that work for fishing a Ned rig, but Lucas has a favorite: the Berkley PowerBait Lugworm is a 4-inch straight worm that he says is perfect for a Ned rig.

“It’s just a ‘do-nothing’ worm and this time of year, the fish don’t want too much action. It’s so simple, but it works so well,” Lucas said, adding that a standard Green Pumpkin works just about everywhere he goes.

He does make a few minor modifications to it before adding it to a 1/8-ounce Berkley Half Head jighead.

“I’ll cut off a half-inch or so to make it a little smaller and I like to dip the tail in a chartreuse dye,” he said. “You don’t want to have too much, just as little as possible to give it just a touch of chartreuse.”