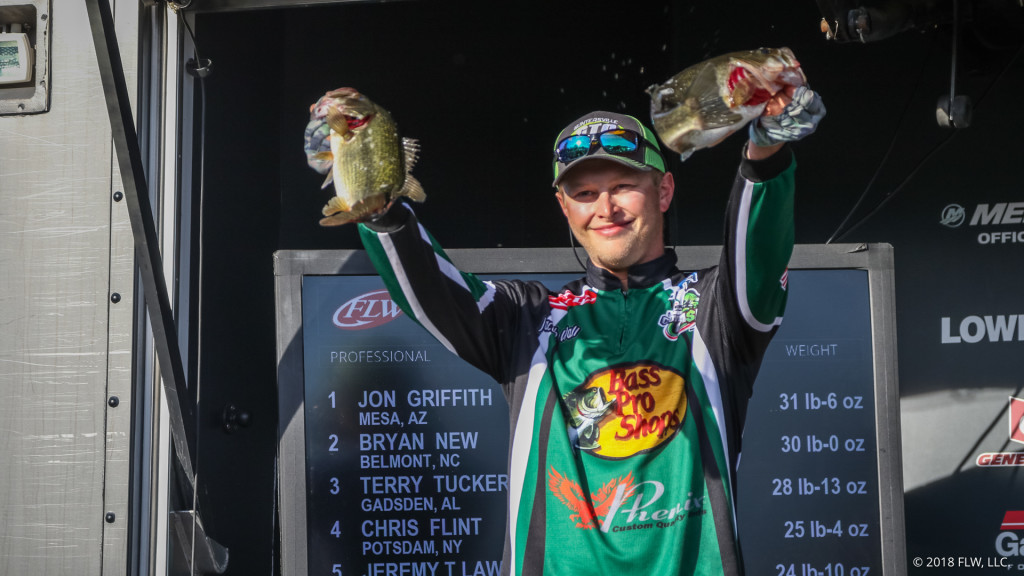 A quick glance at the 34 rookie names on the 2019 FLW Tour roster doesn’t seem to yield many surprises when you scroll through hometowns. Alabama, Tennessee and a few other southern states dominate the list.

But then there are a few curveballs.

One of which is Jacob Wall from Jacksonville, Ore. At 24 years old, Wall has dreamed about competing on the sport’s biggest stage – a dream which will become reality when things get rolling on Sam Rayburn Jan. 10-13. 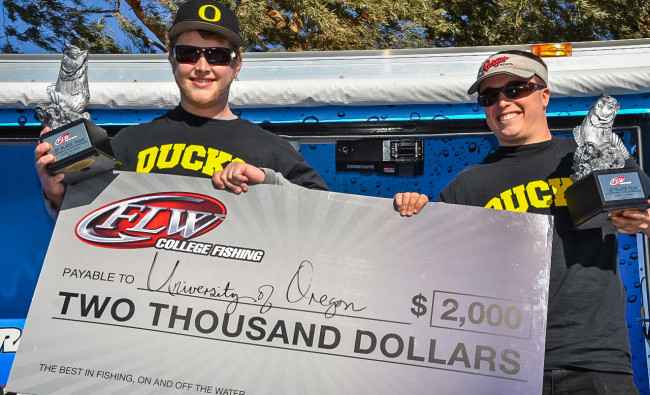 Growing up in salmon country

The Pacific Northwest doesn’t instantly bring to mind bass fishing. In fact, you’re more inclined to think about chasing salmon or trout in a stream than anything. While Wall has caught his fair share of trout and salmon, it didn’t take long for him to realize that bass were his favorite.

“My dad [Steve] got me into fishing when I was really young,” says Wall. “He’d take me out as a sidekick when he went salmon fishing in Seattle where I was born. We moved to Oregon when I was five and started to trout fish and it was fun, but it just wasn’t enough. I remember watching TV and Bill Dance or Roland Martin was on and they were catching bass from cover and I thought it looked fast and furious. I felt like bass fishing was something I could get into.”

Shortly after his curiosity was piqued and he told his dad, it was game on.

“I told my dad about bass fishing and we started going to a small lake and a couple ponds near the house with a Hula Popper,” Wall recalls. “Watching bass blow up on it hooked me.

“From there, I started looking into local clubs and I was 12 when I fished my first club tournament with dad. With bass fishing I loved the fact you can do so many different things and there is so much diversity – especially compared to trout fishing. It helped keep my interest.”

Wall would continue to immerse himself in whatever competition he could with regards to bass fishing. From competing in Bassmaster Casting Kids programs where he’d finish sixth and third in the nation along with junior level events around Oregon with The Bass Federation (TBF). He’d also go on to compete at the high school level and would finish second with partner Colby Pearson in the 2012 TBF/FLW High School Fishing National Championship. All of this helped expose him to new bodies of water and broadened his knowledge of bass fishing.

Naturally, Wall kept his passion for competitive bass fishing alive in college where he attended the University of Oregon. There, he got a degree in Product Design and Fine Art and stayed red-hot throughout his four years.  Fishing with a variety of partners, Wall made the Bassmaster College Series National Championship all four years and qualified multiple times for the YETI FLW College Fishing National Championship (which he only traveled to once).

“Ever since college my goal was to try and make the Tour and compete at the highest level,” Wall says. “I wanted to go pro seriously since I was 20 years old. I’m glad I stuck it out through college and got my degree instead of trying to force a professional career too soon.” 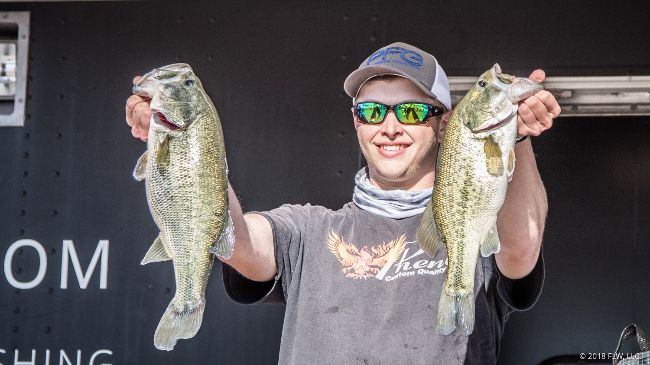 This past year, Wall completed his first year as a pro in the Costa FLW Series Western Division. It was another step forward in his young career, and one he welcomed with open arms.

The first event of the year was on Lake Havasu – which he had fished one other time – and he finished just outside the top 10 in 12th.

“I fished Havasu one other day before the Costa and it was for an FLW College Fishing event,” he says. “I flew down there the day before the tournament and hopped in a boat I didn’t know anything about and wound up finding a spot in a marina where we felt comfortable and wound up winning the event even though we only caught three bass.

“So, I was more than pleased with my finish at the Costa. I was stoked to finish that high. I came into a body of water I didn’t know much about and figured something out.”

From there it was on to Clear Lake where he’d lose some momentum by finishing 50th.

“Clear Lake was more of a slugfest and I don’t do well in those events. I typically shine in events where the fishing is tough because that’s how Oregon can be.”

The final event of the Western Division season went down on the California Delta. It was not only a chance for Wall to get a little redemption from the Clear Lake event, but it was also his last opportunity to punch his ticket to the Costa FLW Series Championship later in the fall.

Like Clear Lake, the Delta can be an intimidating place to fish with the number of hard-to-beat locals that show up for the event. Not to mention that it is a tidal fishery, which adds a whole new element to fishing – and also something Wall isn’t too familiar with. Still, Wall came ready to play and pieced it together.

“I was on something in that tournament I didn’t think anyone else was doing,” explains Wall. “I was throwing a jerkbait on a spinning rod around docks and catching them pretty good. I caught a 7-pounder on it the first day, which was awesome. But on day two I decided to just go fishing and try a new area because I didn’t think the dock thing would pan out again. I found a grass line in the middle of the Delta and ended up catching a bunch of 2- and 3-pound fish. The crazy thing is that there wasn’t anyone around me. It really surprised me how I figured that out on the second day.”

Wall caught back-to-back 14-pound limits on the Delta to finish 26th overall and cash a $2,000 check. More importantly, he racked up enough points to finish 8th overall in the standings and was heading to the Costa FLW Series Championship on Guntersville.

The championship would present yet another serious test in his young career. Nearly 2,500 miles away from home on a body of water completely foreign to him, Wall once again put his head down and got to work.

“I practiced for four days before the championship,” he recalls. “The first day I caught a 5 ½-pounder and another solid one, but the next day I couldn’t put much together and didn’t like the feeling of what I was fishing. I ended up looking around the area I caught fish the first day and that’s where I started my tournament.

“The first day of the event there were six boats within 300 yards of each other. It was tough to adjust to. I struggled the first day and got stuck in my ways. I’m not used to the Tennessee River and they were pulling water and my fish moved from the back, out towards the islands and I didn’t find them until 1:30 or 2:00 on the first day. On the second day, I made an adjustment and learned from day one and put together a good limit.”

Wall moved up the leaderboard to settle in 30th, cashing yet another check and proving to himself that he is on the right path.

“This year has put a lot of confidence under my belt. I learned to not let pressure get to me like it would when I was younger.” 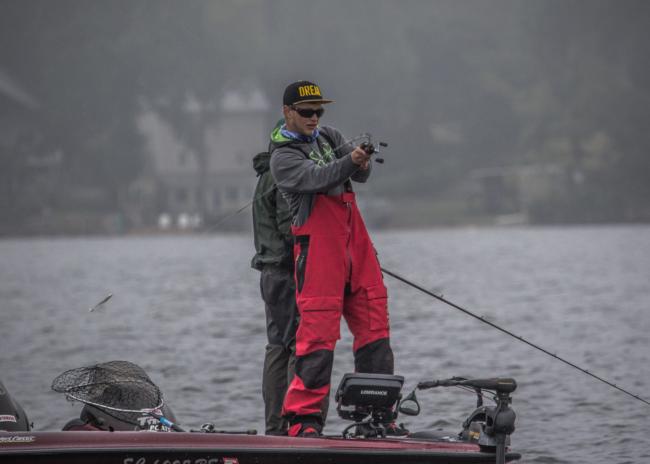 Looking ahead to 2019, Wall will not only embark on his rookie campaign on the FLW Tour, but also make the move to Alabama in order to make travel much more convenient for the season.

“My girlfriend, Michaella, and I are going to move to New Hope, Ala., and rent a house down there. We’re moving our whole lives down there for this. I work at Field & Stream and she works for Dick’s Sporting Goods, so thankfully they are letting us both transfer to the store in Huntsville to work.

“I’m excited to get to a place where the bass fishing is better than at home. Being somewhere where bass are the primary focus feels like where I’m meant to be.”

Being in the heart of bass fishing country will no doubt help him expand on his skills and hopefully polish out some areas of his game that could use some practice.

“I know for sure that offshore fishing is my weakness,” Wall says. “I’m not real experienced with it. I’m going to try to spend a few weeks before Rayburn to try and learn some stuff about it.  I prevail as a shallow-water guy and am good at catching what is in front of me. And I can use my graphs well, but I’m not used to being a half mile or more offshore. But, I’ll be living 10 minutes from a ramp on Guntersville, so that’ll be nice and easy to get out.”

Certainly, there are some nerves for Wall when it comes to thinking about the Tour season, but he’s got a cool, calm demeanor about it. Keeping it simple and playing his strengths will hopefully lead him to success in his freshman season.

“I look forward to all of the lakes, but Grand and Cherokee are ones I have my eyes on. They both should fish more similar to what I’m used to,” says Wall. “I prevail as an angler in the springtime, which is probably why I don’t do well offshore. When the fish are coming in that’s when I’ve done well. A lot of the Tour season takes place in the spring and I think that’s why the Tour sets up well for me.”

No doubt 2019 is going to be a big year for Wall. If he can keep proving himself as he has up to this point who knows what the future could hold. He knows he has his childhood dream in sight, and a solid year on Tour could help spark a new career.

“I’d love to make the fourth day in as many events as I can, but making checks is what I need to be doing (on Tour). I just need to take one event at a time,” says Wall. “My mom told me to take it one bite at a time, one fish at a time. That’s how I’m going to be looking at the season. I want to do something I love for the rest of my life, so if I can maintain [fishing the Tour] that’d be awesome.”