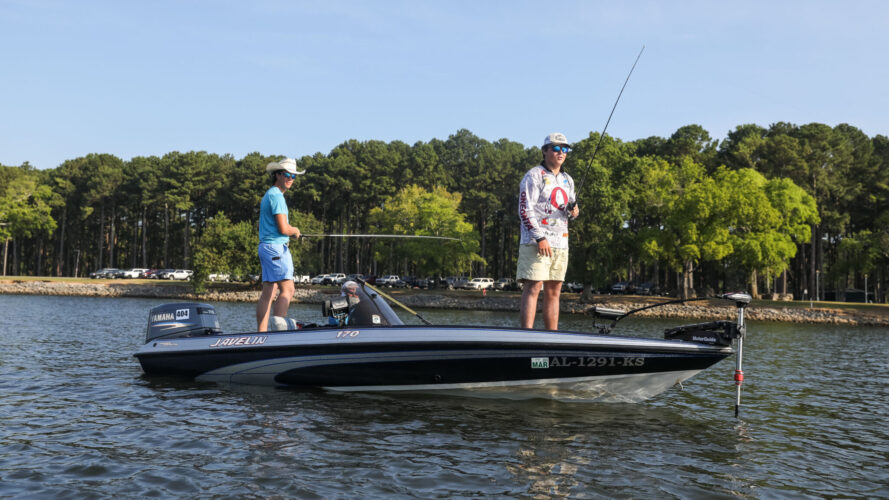 FLORENCE, Ala. – Luke Coleman and Bobby McCray were on the first flight out at 5:30 a.m. on Day 2 of the High School Fishing National Championship. As other boats began to blow by en route to far-flung waypoints across Pickwick and Wheeler lakes, the two crafty, 17-year-old anglers from Central Alabama’s Oneonta High School took a turn and settled in to their target area. By 5:34 a.m., they were fishing.

“We started out here this morning,” said Coleman, after taking a bag of fish to the live release boat at weigh-in. “It was funny. Everybody was blowing by and I had about a 4-pound smallmouth. He was jumping out of the water and everybody was turning their heads wondering what we were doing.”

What they were doing was sticking to a plan that got them to the pinnacle of high school bass fishing. They were fishing beside the weigh-in tent.

“We haven’t gone any further than probably 500 yards from the boat ramp,” McCray said. “In practice, we found some pretty good fish right here and thought we might as well try it.”

Thus far, the results have this semi-local team with a respectable six-fish total of 19-pounds over two days. That’s nearly 7 pounds off of the tournament leaders, but well ahead of the bottom of the field.

The team says their national qualifying strategy began to take shape earlier in the year during an event at Lake Guntersville. There, facing a crowded field, they began searching for alternatives to a heavily-pressured lake. The solution was right in front of them.

“There were two guys fishing an adult tournament that day that culled probably 15 or 20 pounds right in front of us,” Coleman said. “They left, so we went right in there after them and got 20 pounds. That’s when we thought we could roll with this pattern. So now, every other tournament we seem to be right back at the ramp.”

Interestingly, it’s not that the anglers don’t attempt to fish other areas of the lake. They say they practice just like every other team, scouring waterways with sonar, covering waypoints to try to identify likely podium placing schools. What they’ve found, however, is that the ramps seem to foster a significant number of fish released from previous events. With a little patience, they are able to entice those fish into striking again.

“It does take patience,” McCray said. “You will see fish and you will cast at the same place 20 times before you catch a fish. But every one of them that we’ve caught this week had cull tag holes in their mouth. I mean, you can tell that they have been in a live well pretty much every other day of their lives.”

While their trip to nationals this year isn’t likely to pan out in a podium finish, the duo of juniors say they’re eager to return next season. They know the road will be challenging though, as their home state is host to some of the finest fisheries and fiercest competition in all of tournament bass fishing.

They say they haven’t received any negative feedback from fellow competitors about their savvy strategy. Meanwhile, at the weigh-in, most of the adults in the crowd were giving them a pat on the back.

“High school fishing is the most competitive sport there is, in my opinion,” Coleman said. “I could be wrong. Some people may disagree with me, but these kids don’t give up. Some people will go out and catch 1 pound then come back the next day and boat 30 pounds. It’s all about competitiveness and that’s why we do it.”