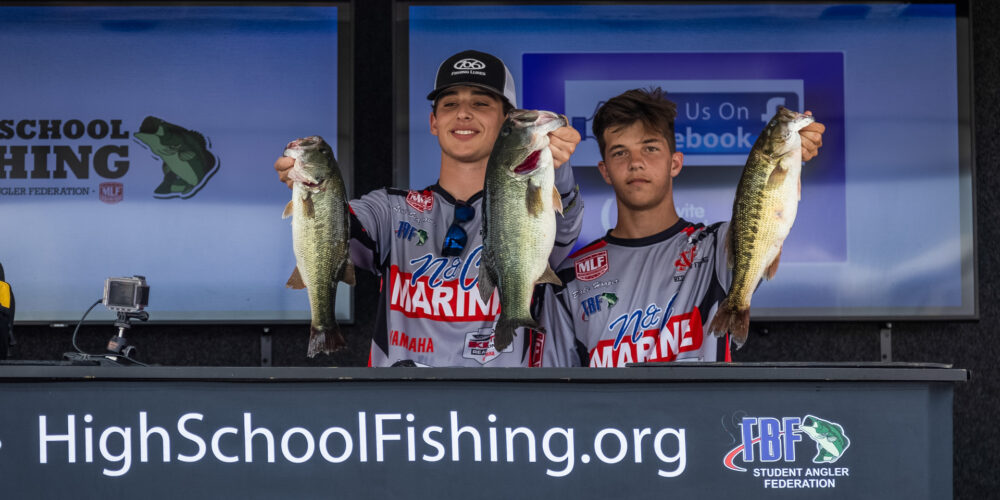 Putting three bass for 10 pounds, 13 ounces on the scale, Levi Seagraves and Blake Hooper took the lead on Day 1 at Lake Hartwell. Repping the Madison County Red Raiders, Hooper and Seagraves are from nearby Comer, Ga., and are currently leading both the High School Fishing World Finals and National Championship. In second, and also in both of the concurrently running events, Ronin Picker and Alec Davidson of the Lincoln County Lunkers tallied 10-2 on Day 1. Overall, the standings are very tight after the first day, with plenty of three-bass limits for all the teams.

“It’s going to be tough all week,” said Seagraves, the 17-year-old Hartwell local doing his best to piece together summer patterns for success on his home water this week. “We are hoping for an early bite tomorrow since we are at the beginning of the pack. We’re hoping the weather is cloudy, too, with the wind blowing a little bit. It gets tough out there when it gets still.”

Seagraves said he picked up bass fishing from his father, himself a lifelong angler. However, he didn’t begin tournament fishing until he was in middle school.

“Being up here all of the time, we kind of know what the lake is going to do this time of year,” he added. “Today, we ran our spots like we did in practice. We didn’t really have to change much, but we saw a lot of people fishing with a worm and we tried to stay away from them to do what we were going to do.”

Seagraves said he and Hooper have been classmates for as long as he could remember, but they began fishing together as a team in 10th grade.

“Communication really makes a good team,” added Hooper, also 17. “Out there, knowing what the other person is thinking and what they are doing, just being on the same page makes a difference. We have both grown up around this area and fished the lake. We are both kind of aware of what we want to do.”

The key to their early success was a run-and-gun tactic that the duo believes helps trigger bass that are under intense pressure from the nearly 400-boat field.

“You’ve got to find them, catch them and leave. You can’t stay on that one spot all day,” said Seagraves. “You have to run-and-gun all day long, pick one up and fish another spot. If you sit and wait on them, you will wear them out. It is tough with that many boats. Luckily, nobody was on our spot this morning; but as we went towards the dam, we found two or three boats each at our second and third spots.”

Hooper said he doesn’t believe fishing on his home water adds pressure on their team, but he does believe it means the lake will fish differently.

“We understand that it’s going to be different than what we are used to with so many people, so much competition and so much on the line.”

You can find complete results from Day 1 of the World Finals here and the National Championship here.