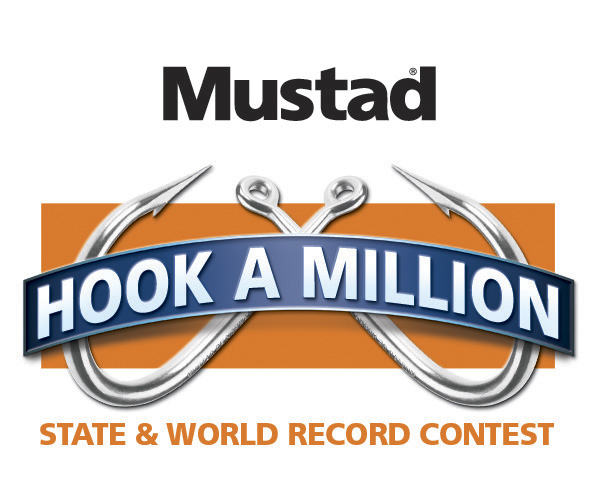 In announcing the promotion, Mustad General Manager Tom Kurtz said the company was looking for a fun way to involve anglers across the country. “With over 50 new state records set in the last year or so and several world records pending certification, we felt the time was right for a program that rewards these accomplishments. We all know that the next cast could be the new record, and this promotion makes it easy-anglers fish on their schedule and their waters.”

The “Hook a Million” promotion, which kicks off this October and runs 12 months, targets 10 of the country’s most popular fresh and saltwater fish. These include Largemouth Bass, Walleye, Channel Catfish, White Crappie, Coho Salmon, Striped Bass, Kelp Bass (Calico Bass), Red Drum (Redfish), Spotted Seatrout (Speckled Trout) and Yellowfin Tuna. It’s open to US residents 18 and older. To participate anglers must use a Mustad hook and register only once at least 24 hours in advance of fishing during the contest period.

Cash awards for the promotion total $1,400,000 and recognize both fresh and saltwater all-tackle state records and new IGFA certified all-tackle world records. “Our goal is to make sure anglers from coast to coast have the opportunity to participate and the chance to win,” noted Mr. Kurtz. “It doesn’t matter what state you live in, you’re still likely to have five chances for a big cash award.” Anglers who establish the first TWO new freshwater or first TWO new saltwater state records for the covered species receive $100,000 each, for a total of $400,000 in cash prizes. The first new IGFA certified all-tackle world record for any of the listed species nets the lucky angler $1,000,000*.

To make sure they qualify for big cash awards, anglers must register in advance and catch the new record on a Mustad hook. “We make thousands of premium hooks for all the species in the promotion and we’re encouraging anybody who fishes to register,” added Mr. Kurtz. “It’s free and you never know when that next record is going to bite.”