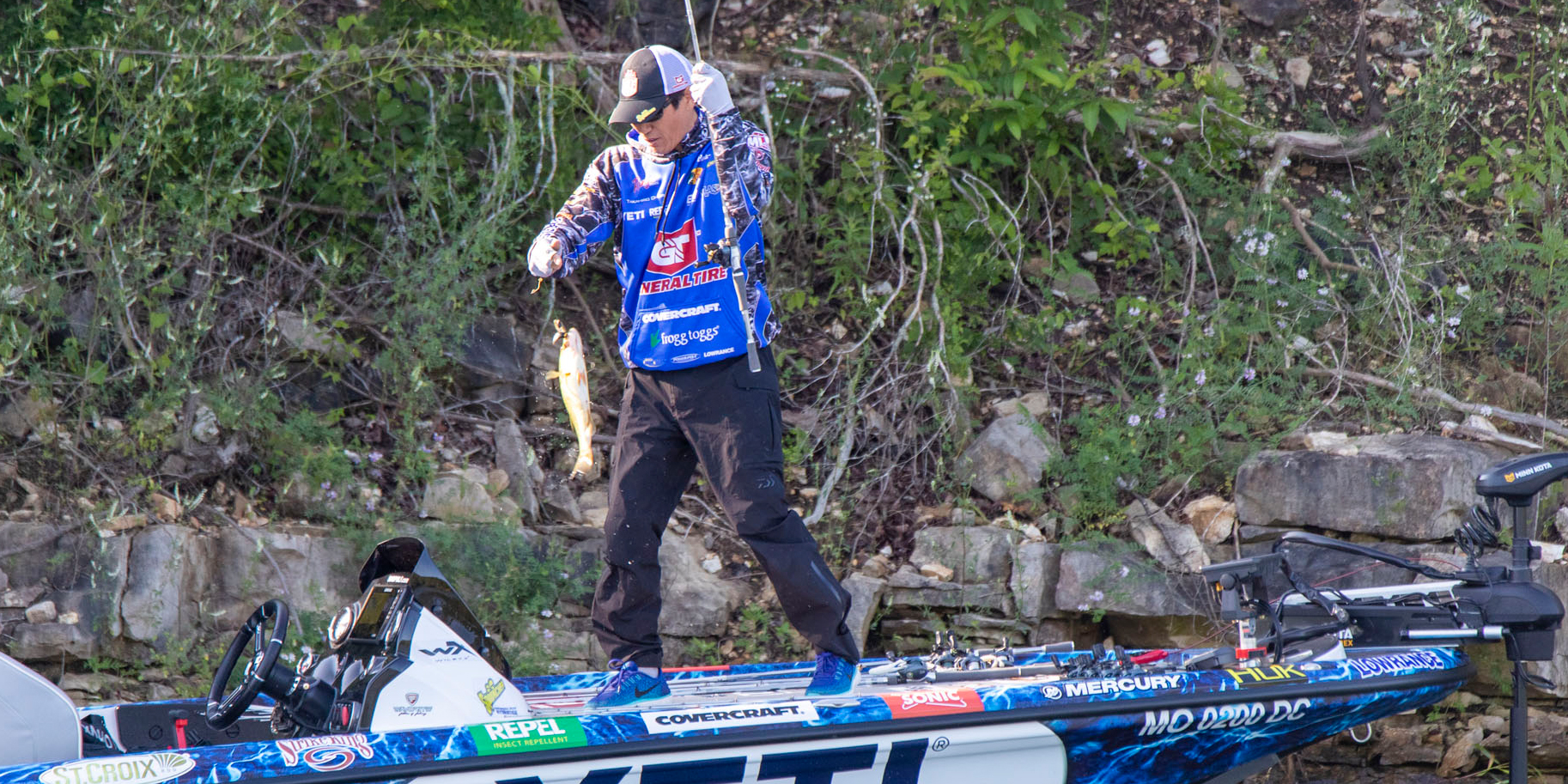 During Sudden Death Round 2 of the 2020 Lucas Oil Challenge Cup Presented by B&W Trailer Hitches, the field was given a SIG SAUER Target Weight of 25 pounds. Two anglers who fared very well in the Elimination Rounds on Bull Shoals Lake did it again this round.

Takahiro Omori and Michael Neal were the first to qualify for the Championship Round as they both hit the target during Period 3. They each continued what they were doing in the previous round with great success, even though their fishing techniques were polar opposites.

Takahiro Omori dominated during Elimination Round 3 and was able to quit fishing after two periods and still end up with the highest weight total. He was pleased with what he had found that day but was worried that they might be fishing a different lake this time around.

“I was thinking it was a 50/50 chance that we would be going to another nearby lake for this round. So I was happy to see that we were going to Bull Shoals that morning,” he said. “We fished a different section of the lake, but I was able to run a similar pattern.”

He ran the bank, fishing any visible cover he could find. “Once the bite faded, I pitched the rest of the day,” said Omori. “Trees, bushes, and anything else that was in the water.”

His lure of choice was a black-and-blue Reaction Innovations Sweet Beaver, on a 4/0 Gamakatsu EWG hook with a 3/4-ounce tungsten weight. He fished it on a 7-3 heavy Daiwa Tatula Elite rod with the same reel as his buzzbait setup.

Omori felt fortunate to quickly find good areas both mornings. “In this format, with no practice, it is so difficult to get on the fish right away. All of the guys in this round had already qualified and knew what was going on at Bull Shoals, so it felt great to find fish so quickly.”

Just like he did in the Elimination Round 1, Michael Neal caught his fish fishing the “old bank” with a drop-shot rig.

He started the day targeting straight banks before realizing another piece of the puzzle. “It was a slow start to the morning, and then it dawned on me where the fish were, there had to be some sort of point close by. It didn’t matter how big or how long the point was, you just needed to have those corners to find the fish,” he said.

He was fishing bushes, and trees in approximately 20-feet of water with a 6-inch Green Pumpkin Big Bite Baits Finesse Worm rigged with a 1/4-ounce weight and a 2/O Gamakatsu G-Finesse Worm Light Hook with Tin Keeper.

“I wasn’t casting it, I was pitching it to targets in front of me, and when you found the right bushes on points, I could call my shot, and I knew when I was going to get bit,” he said.

Neal used the same setup as he did in the Elimination Round, a 7-foot medium Denali N3 rod with a 2500 Daiwa Tatula Elite that he spooled with 10-pound Sunline SX1 braid with a leader of 7-pound Sunline Shooter fluorocarbon.

Ask the Anglers Presented by Champion: How Do You Avoid Dock Talk?

TOP 10 BAITS: How They Caught ‘Em at Stage One Eufaula