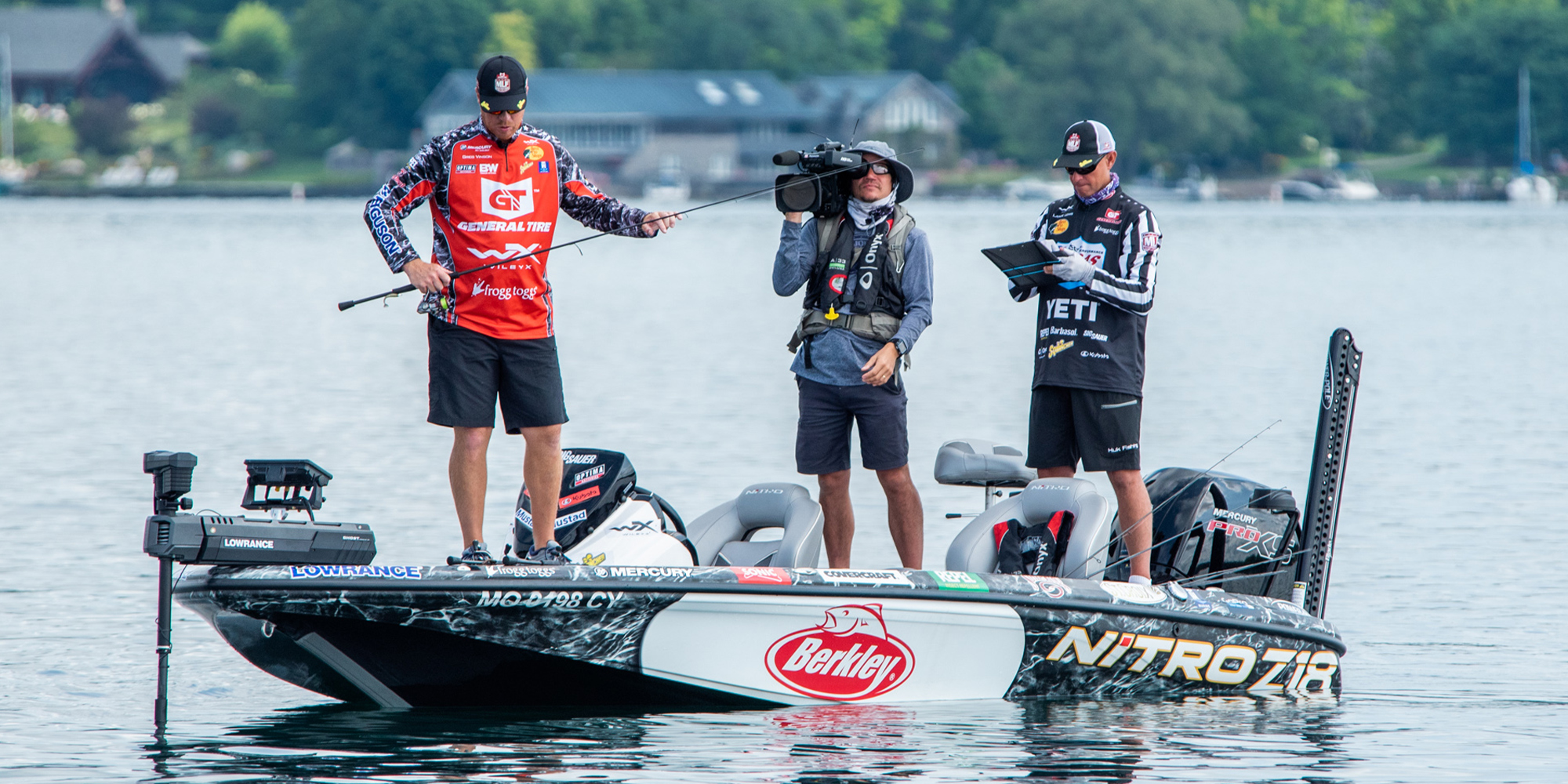 Greg Vinson ultilized a jerkbait to hit the 23-pound Target Weight during Sudden Death Round 1. Photo by Garrick Dixon

SYRACUSE, N.Y. – After three Elimination Rounds at the Bass Pro Shops Heritage Cup Presented by Berkley, the competitors in Sudden Death Round 1 were on the move to a new body of water. Skaneateles Lake, a deep and long glacial lake that is part of the Finger Lakes, was the playing field.

Skaneateles featured extremely clear water, and the nine anglers fishing this round were given a Target Weight of 23 pounds to advance.

By examining his electronic mapping, Palaniuk quickly found an excellent place to start for the day: a long flat that extended into deep water.

“On those glacial lakes with steep water, there generally are not a lot of flats, so it immediately stuck out to me. I originally thought of it being a good place to fish offshore, but I found more fish shallower,” he said, adding that less than 5 feet of water was the key. “I think there were bigger fish out deep, but the better concentration of fish was very shallow.”

Palaniuk utilized a spybait and drop-shot to become the first to reach 23 pounds. After Period 1, he had 20-5 and caught two fish on back-to-back casts early in Period 2 to advance.

“I used the Storm Arashi Spinbait in the Green Gill color to imitate perch and fished it quickly to cover water along with rock transitions,” Palaniuk said. “If I saw fish, I would pitch a drop-shot to them to catch them.”

“Normally, I like to fish the Arashi Spinbait on all fluorocarbon, but in the Cup format, you don’t know where you’re going,” Palaniuk said. “You have to be ready to adapt to anything, so all my spinning reels were spooled with braid so I can then adjust my fluorocarbon leaders.”

He fished a variety of Green Pumpkin and baitfish colored soft plastics, including the X-Zone Slammer on the drop-shot rig. Palaniuk rigged them on a 1/0 VMC Drop-Shot Hook with a 1/4-ounce VMC Tungsten Drop-Shot weight. His rod of choice was an Alpha Angler “DSR,” and he used the same reel and line as he did with the spybait.

Greg Vinson will be the first to tell you he couldn’t get it going on a small perch-colored swimbait when the day started, until he witnessed one bite that set the course for the rest of the day.

“I saw fish swimming around everywhere during the ride around, but I was having a hard time getting them to bite,” Vinson admitted. “Smallmouth are usually fairly simple if you can get around them, but I wasn’t getting bites.

“I saw one swimming and dropped the bait fell to the bottom and I hopped it and it ate it.  I realized they didn’t want the swimbait swimming; they would bite it if it was hopping off of the bottom and I replicated that on my casts instead of just reeling it back in.”

Because of the way he was fishing, Vinson went with a 1/4-ounce Fish Head V3 Balance Force Jig Head, which is heavier than he usually uses for small swimbaits. He fished it on a 7-foot medium MHX Elite X rod that he built and paired it with a 3000-sized reel spooled with 20-pound Stealth Gray Seaguar Smackdown braid with an 8-foot leader of Seaguar Tatsu fluorocarbon.

When the weather changed from slick calm to windy, he picked up a perch-colored jerkbait and immediately started getting bit. Vinson credits this move for pushing him over the 23-pound mark to advance.

He fished the jerkbait on a 7-medium MHX Elite X casting rod with a 7.2:1 reel spooled with 15-pound Seaguar Tatsu fluorocarbon.