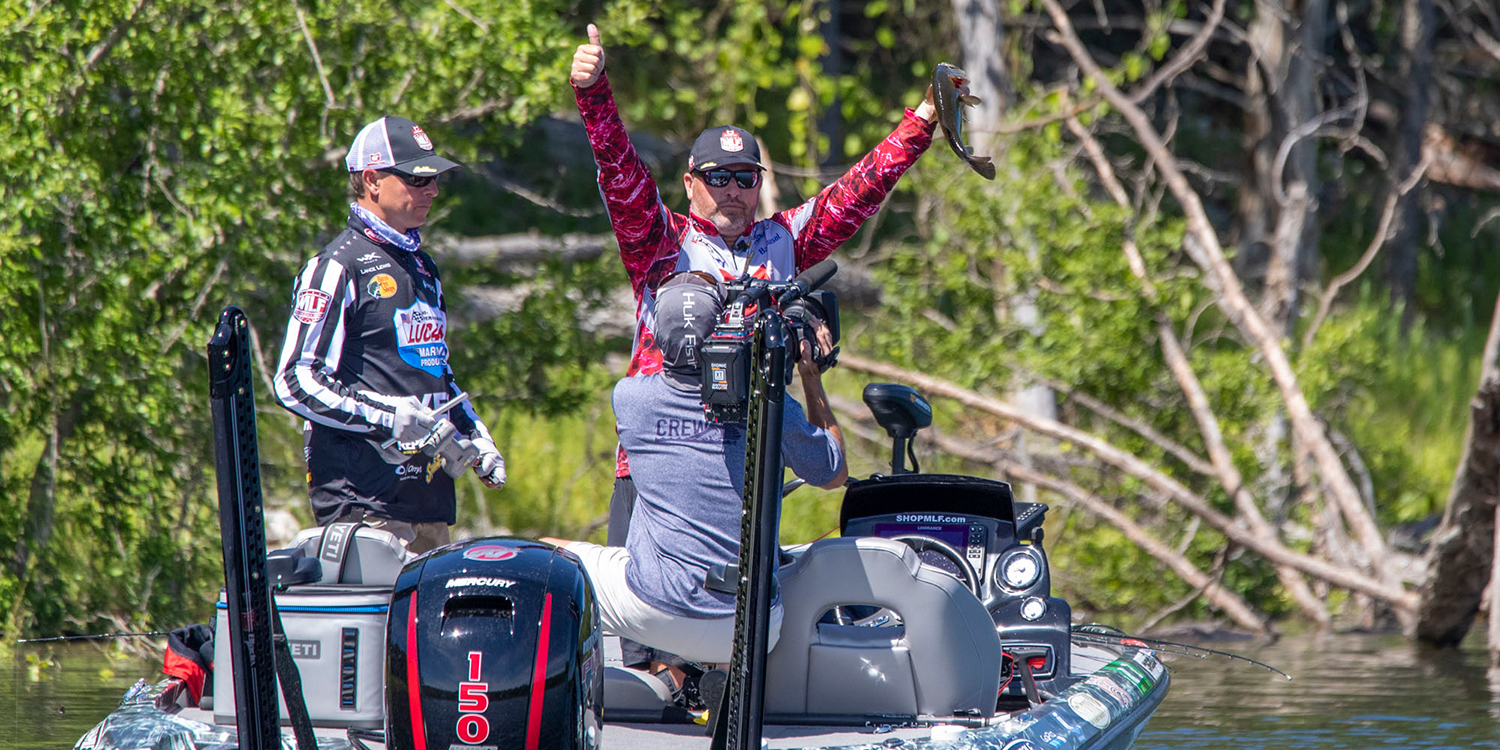 MOUNTAIN HOME, Ark. – On a windy day in the Ozarks, only six anglers out of the 10 competing in Elimination Round 2 of the 2020 Lucas Oil Challenge Cup Presented by B&W Trailer Hitches did enough to claim their spot in the Sudden Death Rounds. The 10 pros battled each other on a flooded Bull Shoals Lake that was 25 feet higher than the normal pool level. Add in some sturdy wind gusts, along with late Elimination Line drama, and we had ourselves quite the finish in the Natural State.

Quality and Quantity for Hite

Brett Hite was able to take home first place in his Elimination Round thanks to 24 bass for 50 pounds, 13 ounces. His 24 total bass were the second-most in the round behind third-place finisher Jordan Lee. Although it was Hite’s first experience with the MLF Cup “anywhere is possible” format, the Arizona pro felt surprisingly comfortable when he rolled up to a flooded Bull Shoals.

“The high water made it really one-dimensional for me because I knew the fish would be on the bank,” Hite explained. “I knew I wasn’t going to try and chase that offshore bite. I was able to not have to split my time between fishing on the bank and fishing offshore, so that really saved me some time and effort.”

Although he didn’t land the Berkley Big Bass of the day (that was Mike Iaconelli, with a 3-11 largemouth), Hite still had plenty of quality fish hit SCORETRACKER®. The Mercury pro reeled in four fish over 3 pounds and eight fish over 2 pounds. Hite says his “vibrating jig around flooded brush” strategy continued to help him throughout the day and putting quality bass on SCORETRACKER® helped with the mental aspect of the competition.

Mike Iaconelli, Jordan Lee, Andy Montgomery, Mark Davis and Dave Lefebre round out the top six moving on to the Sudden Death Rounds. Iaconelli finished just behind Hite in second place with 21 bass for 46-3.

After ending Period 2 in eighth place and below the Elimination Line, Montgomery made a move to the back of Big Creek to find some stained water. Thanks to a combination of pitching and flipping, the South Carolina pro was able to land 11 bass for 18-7 over the final period to jolt up SCORETRACKER® into fourth place.

What’s an MLF Cup event without a little drama to end the round?

With less than eight minutes remaining in the day, Fletcher Shryock hooked a 1-9 largemouth to push him into sixth place, and 6 ounces ahead of Mark Davis for the final spot. Davis needed a scorable bass quickly if he wanted to advance in his home state. Davis brought in a 2-12 smallmouth with time winding down to answer the bell and knock Shryock out of the top six.

“I’ve fished a lot of MLF events and that last hour was the most pressure-packed hour that I’ve ever fished,” Davis said to the cameras immediately following the conclusion of Period 3.

End of the Road

Shryock, Greg Hackney, Alton Jones, Jr. and Dustin Connell were unable to clinch a spot in the top six and have been eliminated from contention in the 2020 Challenge Cup. Connell has qualified for the remaining three Cup events. Hackney and Shryock will compete in the Heritage Cup, while Alton Jones, Jr. returns for the Summit Cup, the fourth and final Cup event of the season.

The 2020 Challenge Cup continues Saturday, Jan. 18 at 2 p.m. ET with Elimination Round 3 on Outdoor Channel.