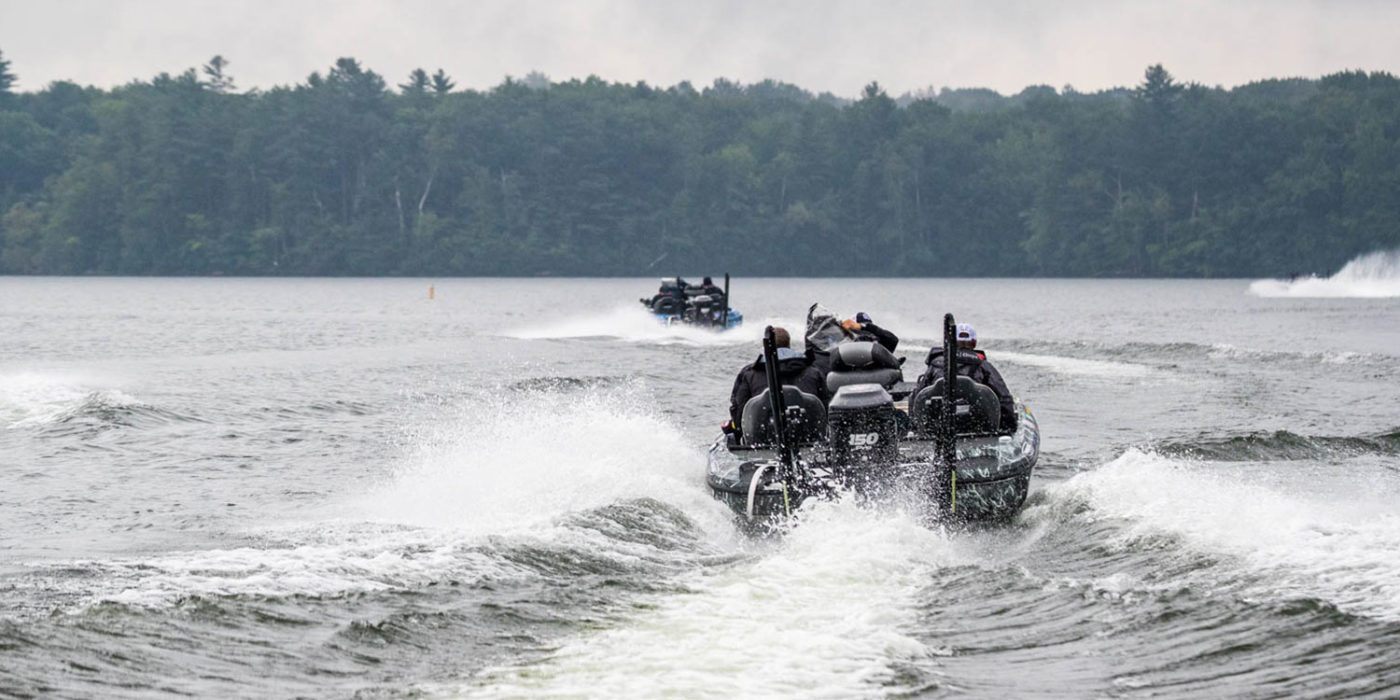 One of the most memorable Major League Fishing Cups in history took place in Maine in 2014, the last time the Summit Cup visited the Belgrade Lakes region near Waterville.

During that event, MLF pros were shuttled around to some of the area’s best smallmouth lakes for the Elimination and Sudden Death Rounds. On the final day, the top six pros were taken to an obscure lake in the region called China Lake.

China Lake produced such an unforgettable finale in the MLF history book because to some degree, China was a sort of “trick” lake that rendered a big surprise ending. The gist was that, at the time, China was dominated by quality largemouth that lived in the lake’s plentiful shallow milfoil. In addition, the lake also had an algae bloom going on, which pushed the largemouth even shallower.

And they assumed wrong.

While most of the field started the first period on mid-lake shoals for smallmouth, Scott Suggs put his boat on the bank, pulled out a bladed jig and went to work cracking China’s untapped largemouth population. Once he dialed the shallow grass pattern in, the Suggs train left the station and never looked back. By the time other pros figured out what was happening, Suggs had lapped the field on the SCORETRACKER.

So as the Championship Round convoy pulled up to China Lake for the final day of the 2019 MLF Summit Cup, several of the finalists knew exactly where they were. Those who were burned by the China Lake trickeration the first time around did not the scalding that China left on them.

“Yes sir, I know exactly where we are,” Mike Iaconelli said as he climbed into his boat. “Some lakes leave you with scars that you never forget, and this place is one of them.”

Iaconelli made it to the Championship Round in 2014 on China, and is the first to admit that he got sucked into the smallmouth snare in the first period.

“The cardinal sin in the MLF format in this part of the country is to assume you know what species of fish is dominant in a lake,” Ike said. “I committed that sin the last time we were here. I came here with smallmouth on the brain and got burned. I didn’t figure it out until the middle of the end of the second period when I moved to the bank and immediately caught a 3 3/4-pound largemouth and then a 2 1/2-pounder on the next cast, and I knew right then I had completely missed it. That’s the kind of thing that burns me up, because I know better.”

As if he was listening to his own advice, Ike then recognized the possibility of the opposite happening this time around.

“And here’s the crazy part: it’s so easy to fall into that trap again, except the other way around,” he said. “There are three or four of us fishing today that fished last time and we all know what happened. So it’s easy to come here thinking ‘This is a total largemouth deal’. But four years is a long time for a lake to change. I know for a fact there are smallmouth in here because I caught some last time. So I could go out there all loaded for largemouth today, but maybe this time it sets up better for smallmouth and it’s completely opposite. You can never, never assume you know what color fish to fish for in this format. You have to let the fish tell you that.”

Brent Chapman also vividly remembers his experience on China Lake last time. Chapman has a knack for ferreting out overlooked largemouth in lakes dominated by spotted or smallmouth bass, so his scalding stung particularly bad.

“Oh yeah, I remember the butt kicking I took here,” Chapman said. “It hurt, too, because it felt like I got beat by my own game. So now I at least have a shot at some revenge. I’m glad I can now dig out all these casting rods that have been in my rod locker all week and actually use them.”

And much like Iaconelli, Chapman suddenly saw himself falling into the same judgment trap but the other way around.

“Of course I say that, and now I’ll go straight to the bank with my largemouth stuff and someone will catch a hundred pounds of smallmouth in 40 feet of water.”

Brent Ehrler was also shaking his head as he recalled his memories from China Lake four years ago.

“I felt like this might happen,” he said. “I figured they would come back here for the Championship Round; oh yeah, I remember it all too well. I hope the same thing is happening as last time, (but) at least I’ll have some fun this time.

“I’m sure things have change to some degree, though. I noticed that Great Pond was a little bit different. Those fish were not set up the exact same way as they were last time. These fish probably got fished for quite a bit after that show aired, so they might be a little smarter this time around.”