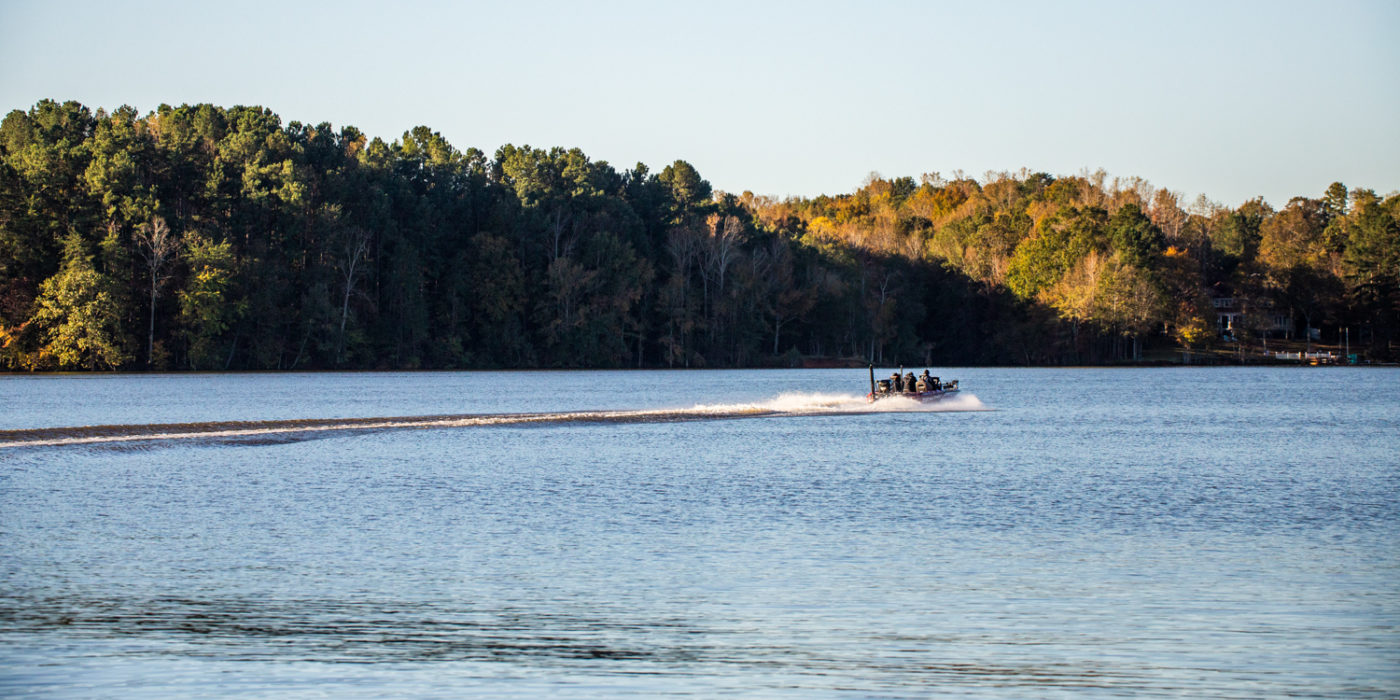 The 2019 Challenge Cup Elimination Round 1 airs Saturday, May 11 from 2-4 p.m. ET on the Outdoor Channel. ﻿Photo by Phoenix Moore

ALBEMARLE, N.C. – When MLF Cup pros come to town, they hope it’s a town they’ve never been to before. An unfamiliar town usually means an unfamiliar lake, which tends to peak the excitement level among the 30 pros who find that new waters tend to be the best place to vie for an MLF Cup.

So when Albemarle, N.C., was announced as the host town for the 2019 Lucas Oil Challenge Cup Presented by B&W Trailer Hitches, held Oct. 29-Nov. 3, it had the kind of unfamiliar ring to it that MLF pros relish. Very few of them had any idea where Albemarle even was, much less any idea of what lakes were around it.

As it turns out, the town of Albemarle is situated along the Yadkin and Pee Dee River chain of lakes, which includes High Rock, Tuckertown, Badin, Tillery and Blewett Falls.

Of those reservoirs, the Challenge Cup will begin its Elimination Round on High Rock Lake. Though most of the MLF pros have heard of High Rock, there hasn’t been a national-level, professional fishing tournament held there in over a decade.

During the 1990s there was a trio of Bassmaster Classics held on High Rock. In 2007, BASS also held a portion of a BASS Major on High Rock before moving on to another lake for the finals.

Given the amount of time High Rock has flown under the radar in the world of pro bass fishing, it’s essentially a new body of water to most of the pros arriving at the ramp on day one.

As with most MLF events, High Rock has been divided into different zones for the Elimination Round. However, those zones had to be shuffled around a bit due to High Rock’s high water brought about by double deluges from two different hurricanes. Originally, MLF had planned on using the Abbot’s Creek Arm for the day one zone. But since the elevated water levels prevented boats from getting under the Highway 8 bridge at the Abbot’s Creek Access, an audible was called to move the zone over the Second Creek arm to also include the Crane/Town Creek arms and the section of the main lake between those two creek arms.

Due to recent rains in North Carolina, High Rock’s main lake is so blown out with muddy water, it will likely not even be a factor. Finding better visibility up in the two creek arms in the zone will be the name of the game.

The Challenge Cup timing also happens to coincide with the arrival of the Southeast’s first major cold front of fall, with nighttime temps dipping down to the 40-degree mark and the daytime highs pushing past the 60-degree mark. Water temperatures have also fallen down into the 58- to 62-degree range.

Some High Rock History in the Cup Field

As the pros arrive at Tamarac Marina boat ramp and are informed they are on High Rock Lake, the conversation among the pros quickly swirls around the last time a big tournament was even held on High Rock. From that discussion came an impromptu Bassmaster Classic trivia quiz as to what years those High Rock Classics were held and who won them.

Veteran pro Mark Davis passed the Classics-on-High-Rock history test with flying colors, mostly because Davis himself was one of the answers. Davis won the 1995 Bassmaster Classic on High Rock by fishing deep brushpiles with a big spinnerbait. In winning that Classic, Davis became the first bass pro to ever win the BASS Angler of the Year trophy and the Bassmaster Classic trophy in the same season.

“I’ve got some great memories about this lake, for sure,” Davis said. “But, gosh, that was so long ago and that Classic was a summertime tournament. I haven’t heard anything about this place for years so I have no idea what to expect today.”

“What I can tell you about these fish here in the Carolinas is that they are what I call ‘Eastern fish,’” Davis explained. “By their nature, they tend to live shallower than bass in reservoirs in other parts of the country. If there is any color or cover in the water, they get shallow and stay shallow. They’re different from our bass out at Lake Ouachita in Arkansas, which tend to roam offshore a little more, especially this time of year.”

With High Rock’s abnormally high water for this time of year, Davis’ intentions to fish shallow were obvious given the shallow-running crankbaits and spinnerbaits strapped to his deck.

If anyone in the day-one group has a “local advantage” at High Rock, it might Andy Montgomery, who lives in Blacksburg, S.C., just a couple of hours away from Albemarle. Montgomery says he has fished High Rock before, but it’s been 15 years or so since he has been back.

“I haven’t fish over here on this Yadkin Chain very much,” Montgomery said. “I’ve always fished lakes on the other side of Charlotte – places like Wylie and Norman. This is a whole different chain over here and the fish act a little different. These lakes usually have more color and more flow throughout the year so the fish tend to live a little shallower.”

“From what I remember, though, these lakes over here have some good fish in them,” he added. “Catching 4- to 6-pounders is a little more common over here. So we’ll probably see a couple of good ones caught each day we’re over here.”

Montgomery is known for his ability to seine fish out from underneath docks. And though High Rock has plenty of docks, he’s a little concerned that the high, muddy water will deter his favorite way to fish.

“Fall is usually a good time to fish docks because the water is normally pulled down and less of the docks are in the water for fish to use,” he explained. “But when you get high, muddy water like this, it sort of takes docks out of the picture: there’s just too much water up around the dock for the fish to use and it’s harder to read the sweet spots under the dock.”

Just moments before the official call to launch the boats happens, Montgomery nods his head towards the Bringle Ferry Road Bridge and lowers his voice.

“I haven’t fished here in years, but one thing I do remember about this place is that bridge right there is one of the best places on the whole lake,” he revealed. “If a man were to sit there and fish that bridge all day, he’d probably be on his way to Sudden Death.

“The only problem with that is, old Andrew here doesn’t have the patience to do that,” he laughed. “I might throw at it once or twice this morning but then I’ve got to go. But mark my words, someone will get their ticket punched to sudden death by sitting there all day.”